Oh Seattle, you were everything I wanted and more.

This was the first thing we ate! Steak tartar at Bar Melusine. We got in around 7PM (but it felt like 10PM to us) so we just wanted some small plates before crashing. We also got some pretty awesome fries, something that tasted like lamb prosciutto, and a chocolate profiterole with coffee ice cream.

First coffee stop (of many). I don’t usually like to have a pastry for breakfast because it’s not filling enough, but we got a slice each of the banana and zucchini breads and they were dense. In a good way.

We had some breweries picked out in advance, but ended up stumbling across Optimism Brewing when we were walking around and I was OBSESSED with the inside. 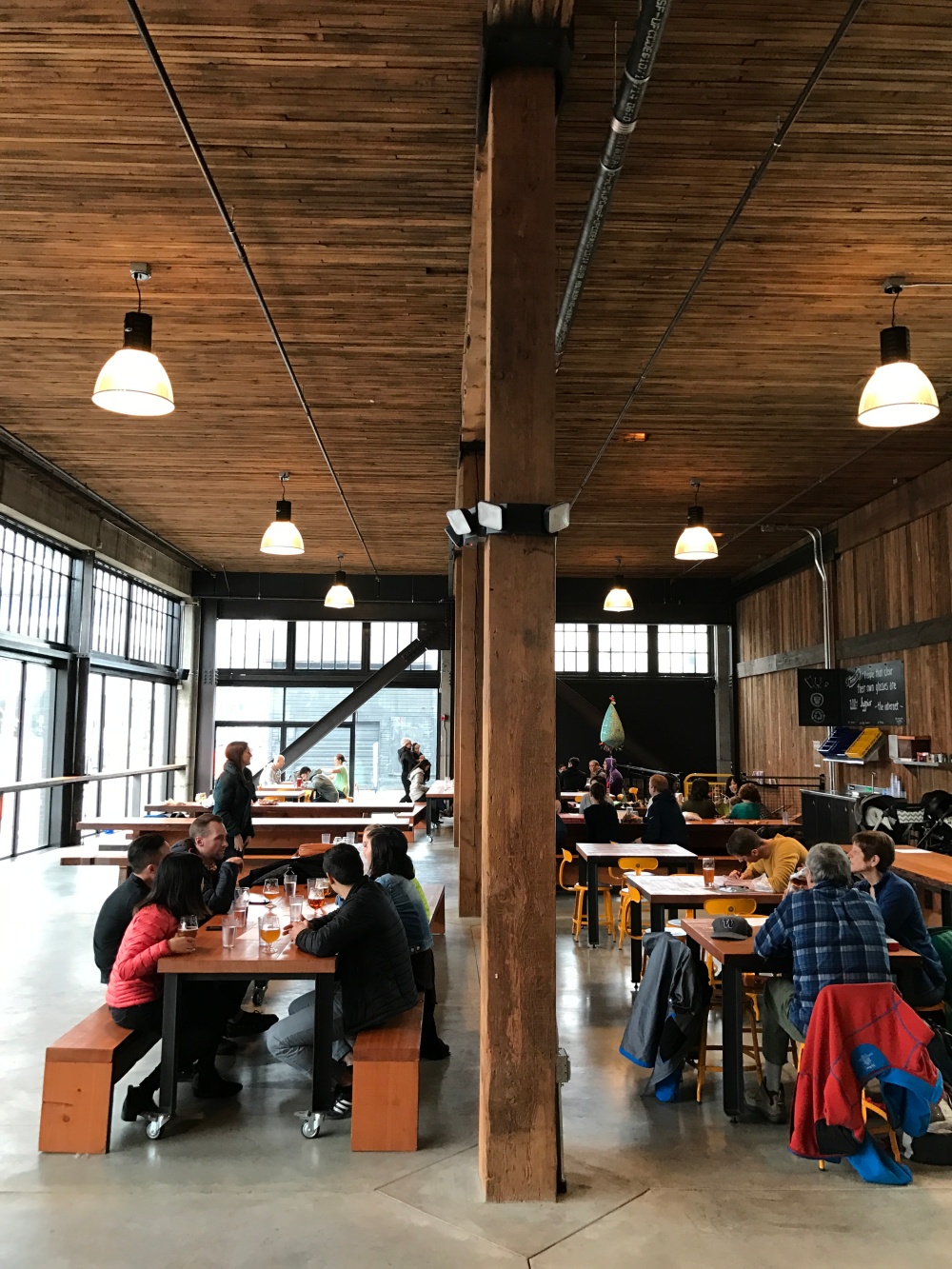 We went to a really cool place called Chuck’s Hop Shop that had a bunch of beers on tap but also a million six-packs and single beers that you can just walk in and buy. And they had a food truck outside (Bread and Circuses) that served us the most incredible Brussels sprouts. Already scheming to recreate these. 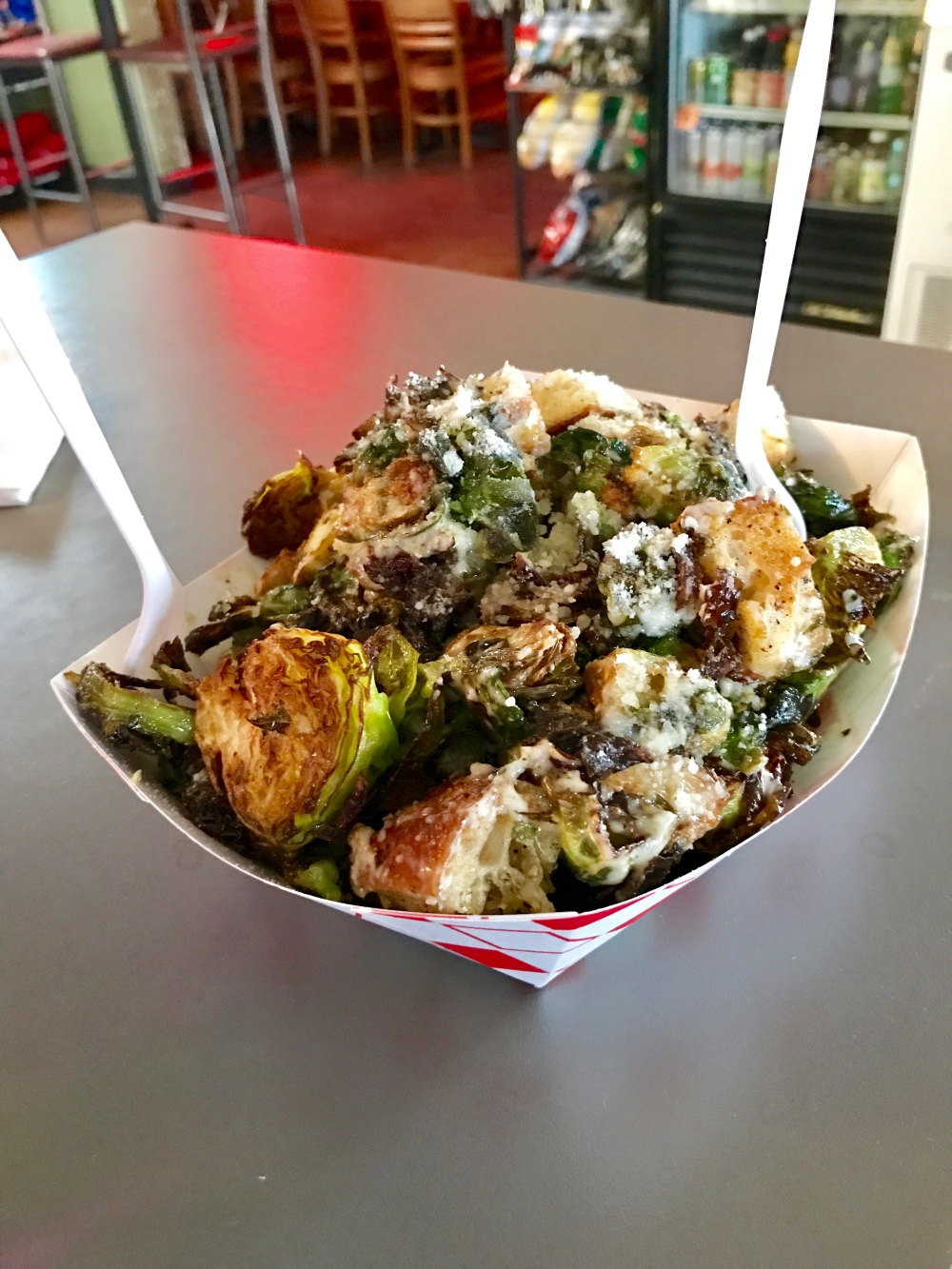 I desperately wanted to visit this place because they brew an “Alternative Facts IPA”. Ignore my resting bitch face in this photo, because I loved the beer.

Dinner that night was at Manolin, which also had really great small plates. Their rockfish ceviche and these mussels with aji amarillo squash sauce and sourdough were two of our favorite dishes during the trip. 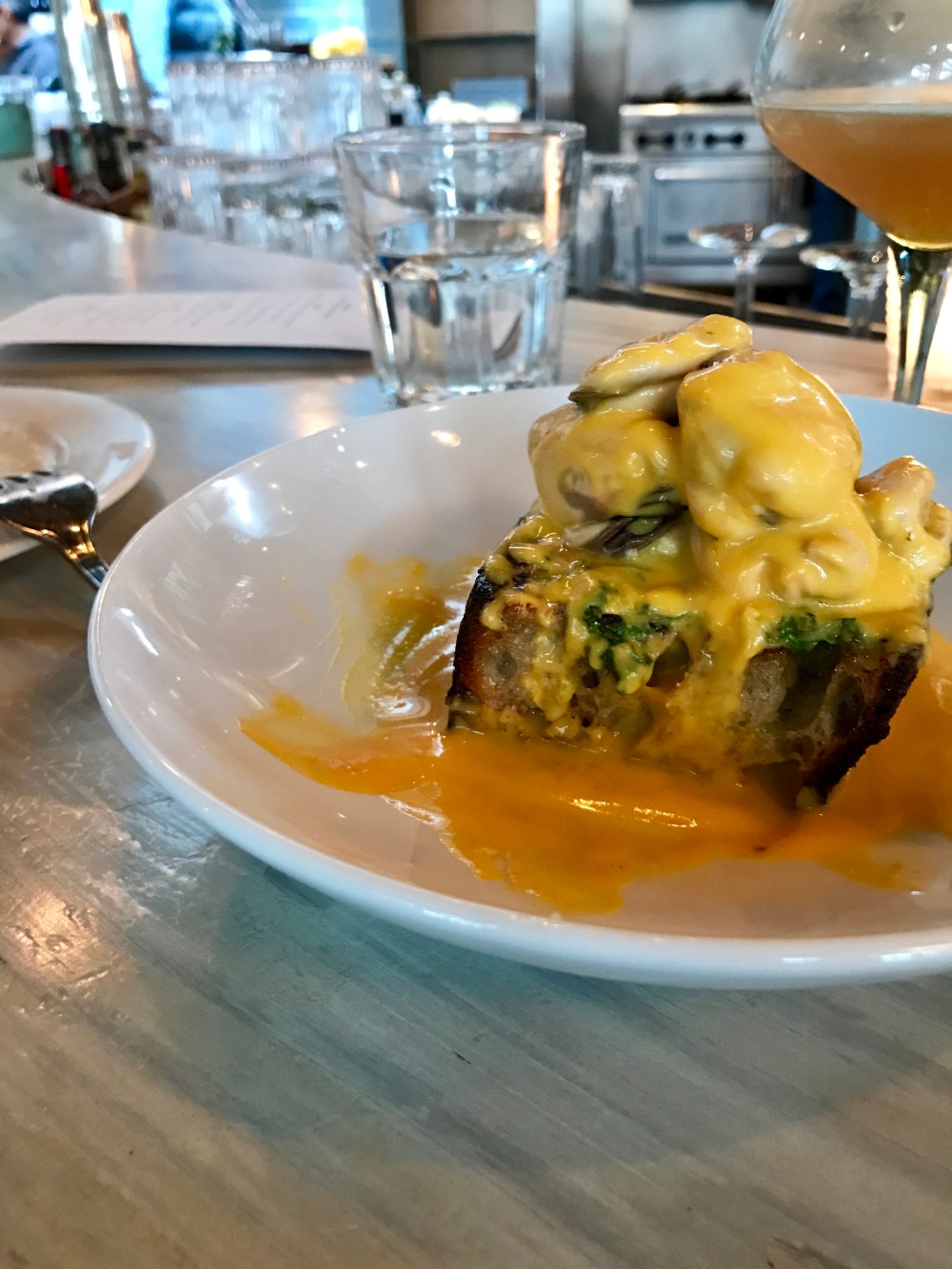 Totally not what we were expecting when we ordered mussels with sourdough bread, but it was a wonderful surprise. And the mussels were HUGE.

Day 2 we started at another coffee place. They ended up winning the GS’ coveted ‘best cold brew’ award, and I was super happy to have some homemade granola.

Good fuel before heading to Seattle Bouldering Project for some indoor climbing. And yes, I look like a kitten stuck in a tree.

The GS had a little more confidence. Stupid long limbs.

Then we did a tour of the Space Needle and the Chihuly glass museum. I’m SO glad we did both. I know they’re touristy but we also got to see a glass blowing demonstration which was really cool. 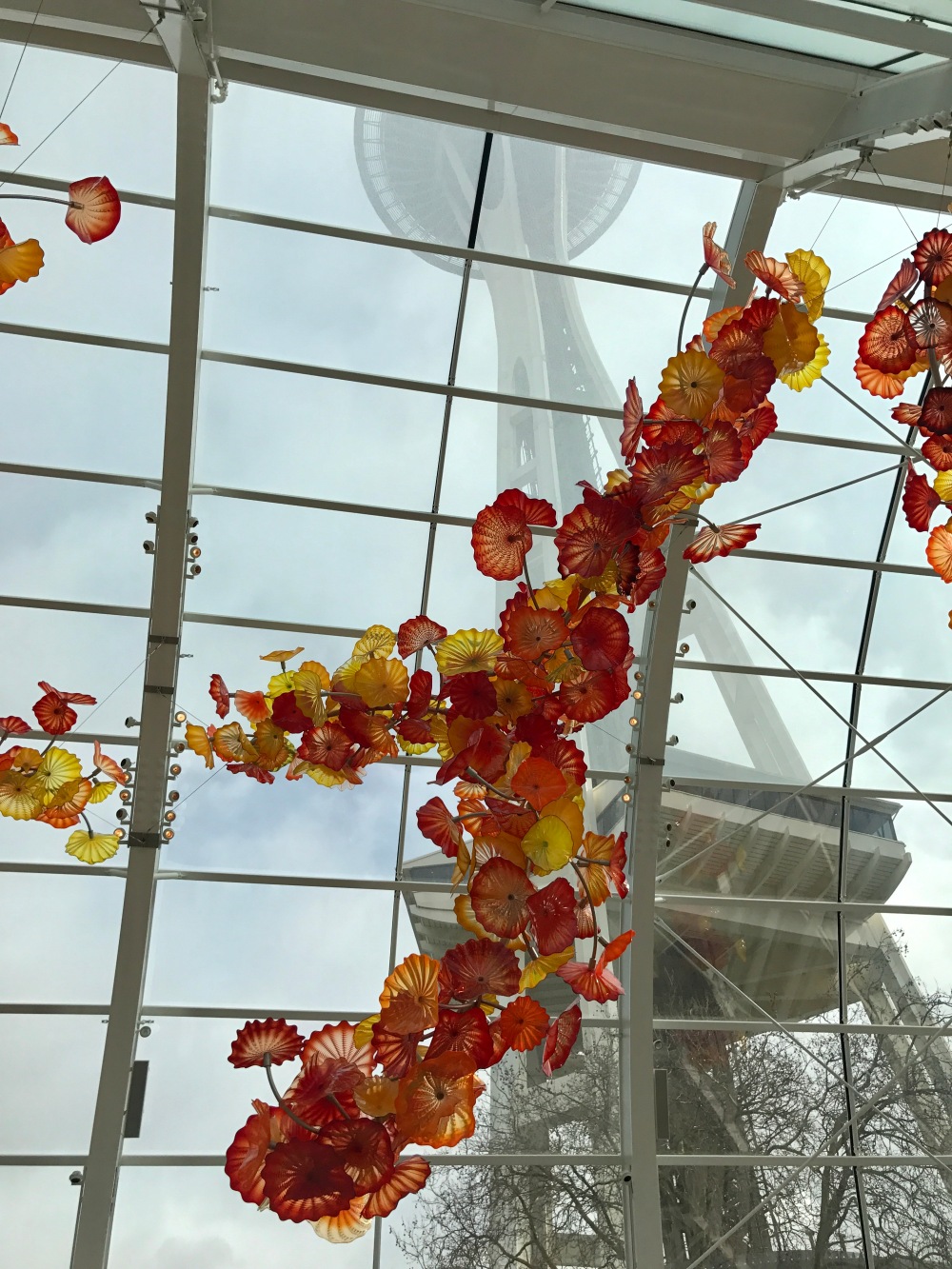 Then we went to the Starbucks Reserve & Roastery. It was beautiful in there and so fun to look around. It cost us a quick $22 for these two barrel-aged cold brews (stop cringing, Mom) and now I want all my iced coffee to be poured over those giant square ice cubes. I don’t want it barrel-aged, though. It tasted like alcohol!

We did happy hour at Elysian, and tried basically every beer they offer for a total of $8. Which was good because my 401K was spent at dinner. 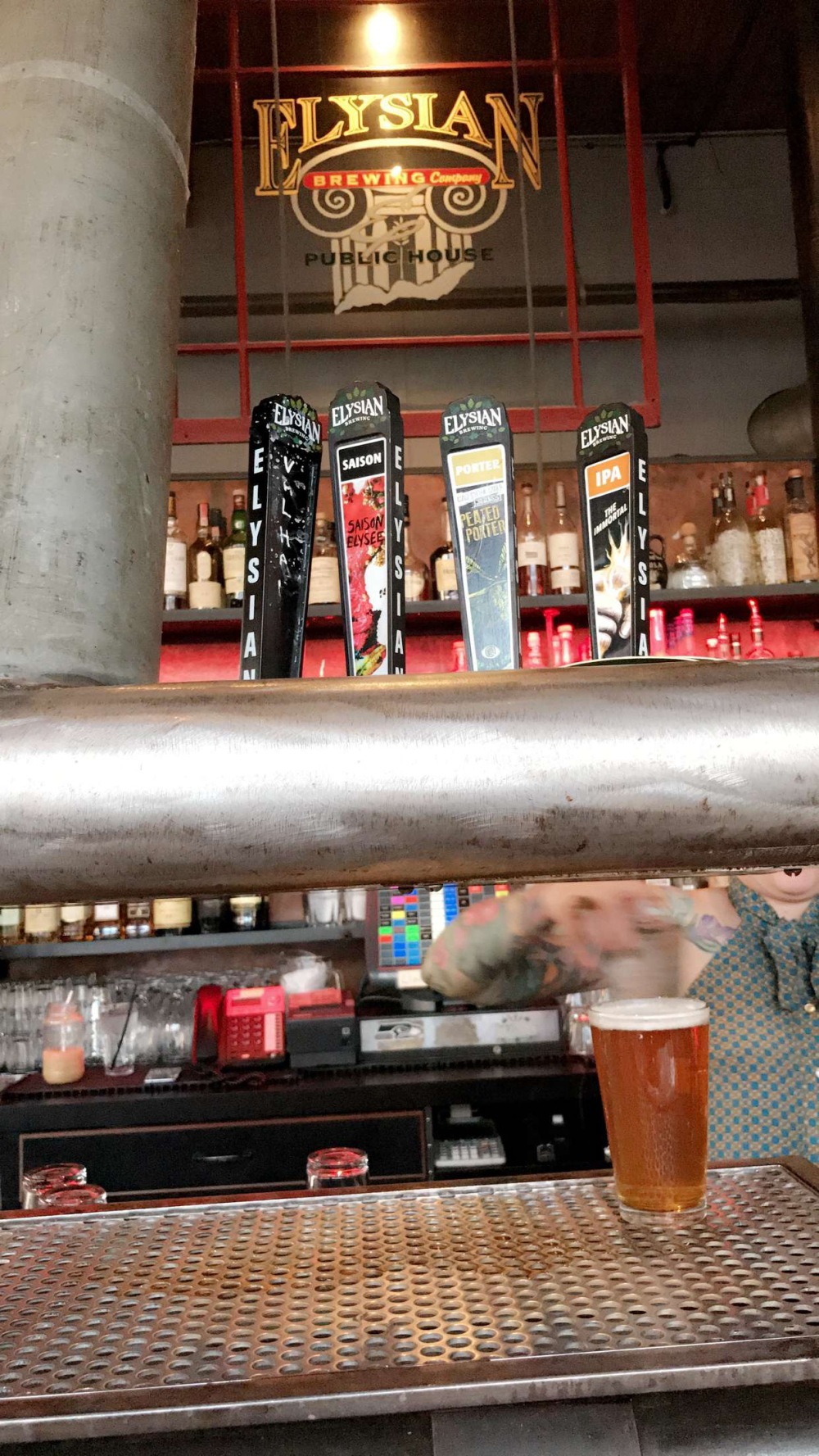 Dinner at Bateau! I could do a whole blog post on this place. Vegetarians should stop reading now. It was advertised as a “French-ified whole animal steakhouse” which is pretty accurate. They had four cows, each from a different farm, and they use the whole animal- nose to tail. They had a big chalkboard with each of the steaks listed and you got to pick the one you wanted, and then they would cross it off. 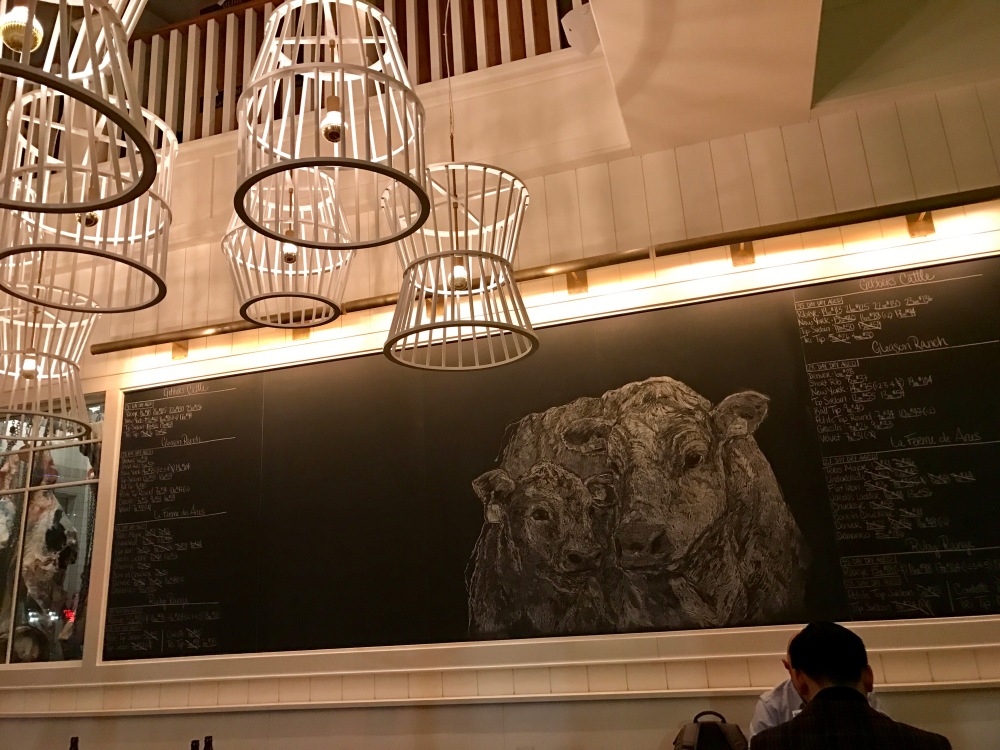 We started with the French onion soup (mine) and beef liver pate (his). French onion soup is always made with beef stock but predominately tastes like onions. This one tasted like beef, and it was incredible. I also expected to hate the pate but it was actually good!

For steaks, I had an underblade and the GS had a chuckeye (from the same cow). With preserved lemon brown butter and anchovy butter, respectively. Hands down best steaks of our lives, but I didn’t take pictures because I was drooling everywhere.

Our last full day, we hit two more coffee places in the morning, and then Fremont Brewing Company. One of our Lyft drivers told us we had to check out the Fremont Troll, and it was within walking distance to this brewery.

So really it would have been rude of us to not go and taste their beers at 11AM. This place had my favorite beers of the 5 that we went to (thanks for the recommendation, Nell!) So many IPAs and pale ales. 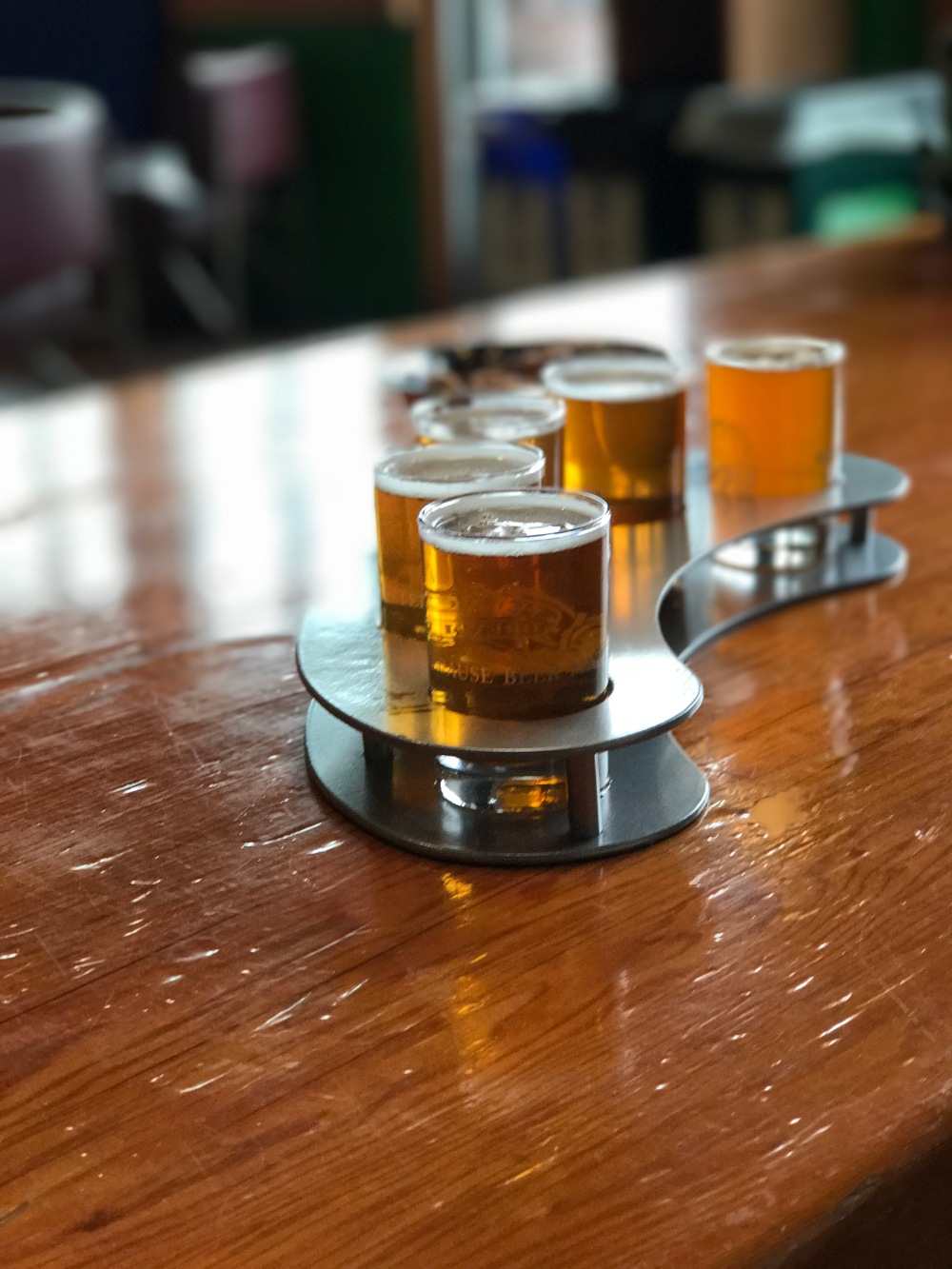 Pike Place Market was very high on my to-do list for this trip, and it didn’t disappoint. I guess it’s like any other public market in a city, but it’s HUGE.

And the others don’t have a gum wall. 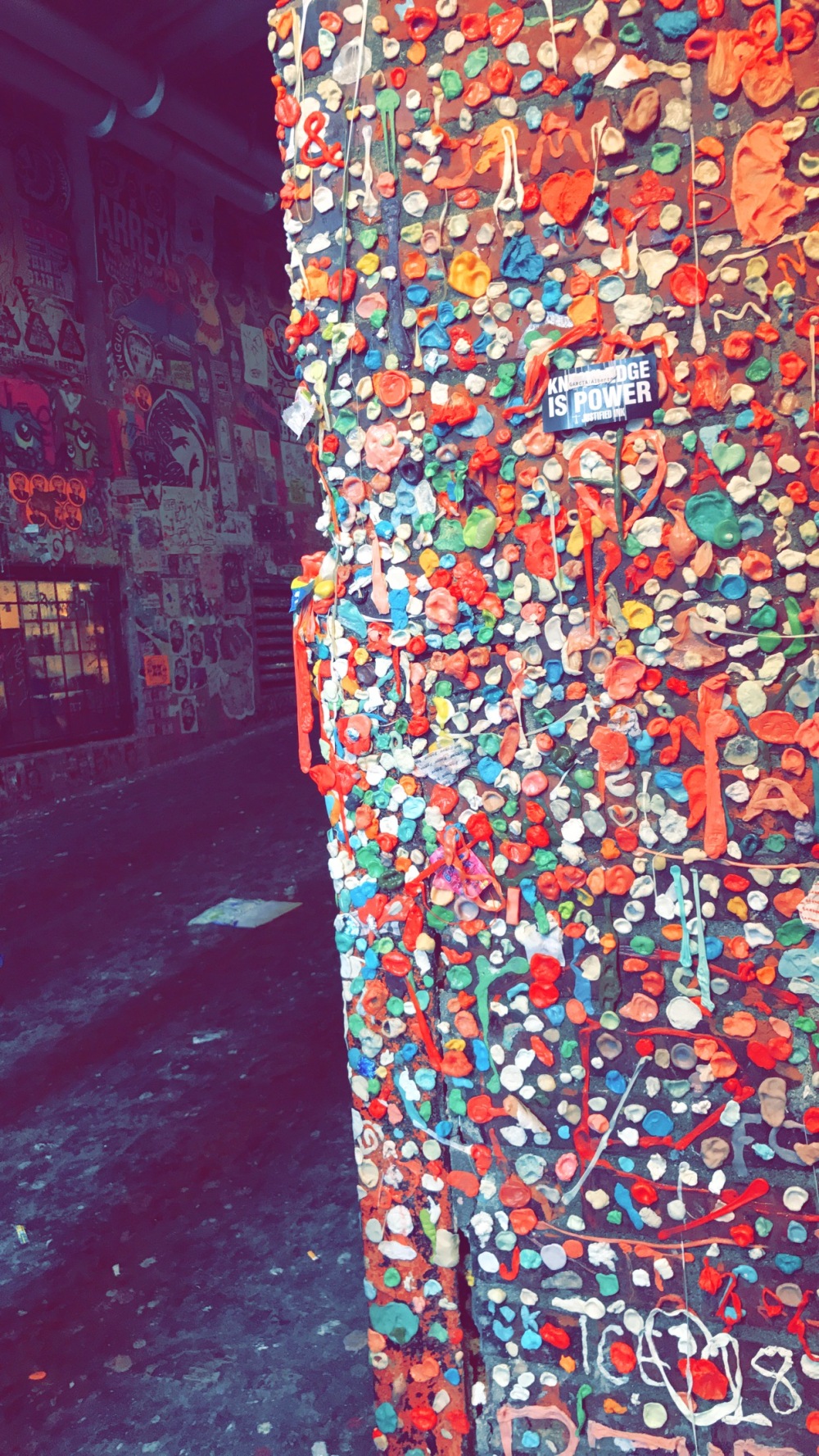 We had seafood bisque in a bread bowl for lunch and then I died and went to heaven.

We did a tour at Pike Brewing Company which is actually located inside the market. They probably had my least favorite beers of all the ones we went to, but the tour was AWESOME. I’ve been on a bunch of brew tours but never one this thorough, so if you’re into craft brewing you should definitely check it out. Ask for Abil.

For dinner on our last night, a friend of ours from Baltimore hooked us up with HIS friend who is the chef at Trove, a Korean barbecue place in Capitol Hill. 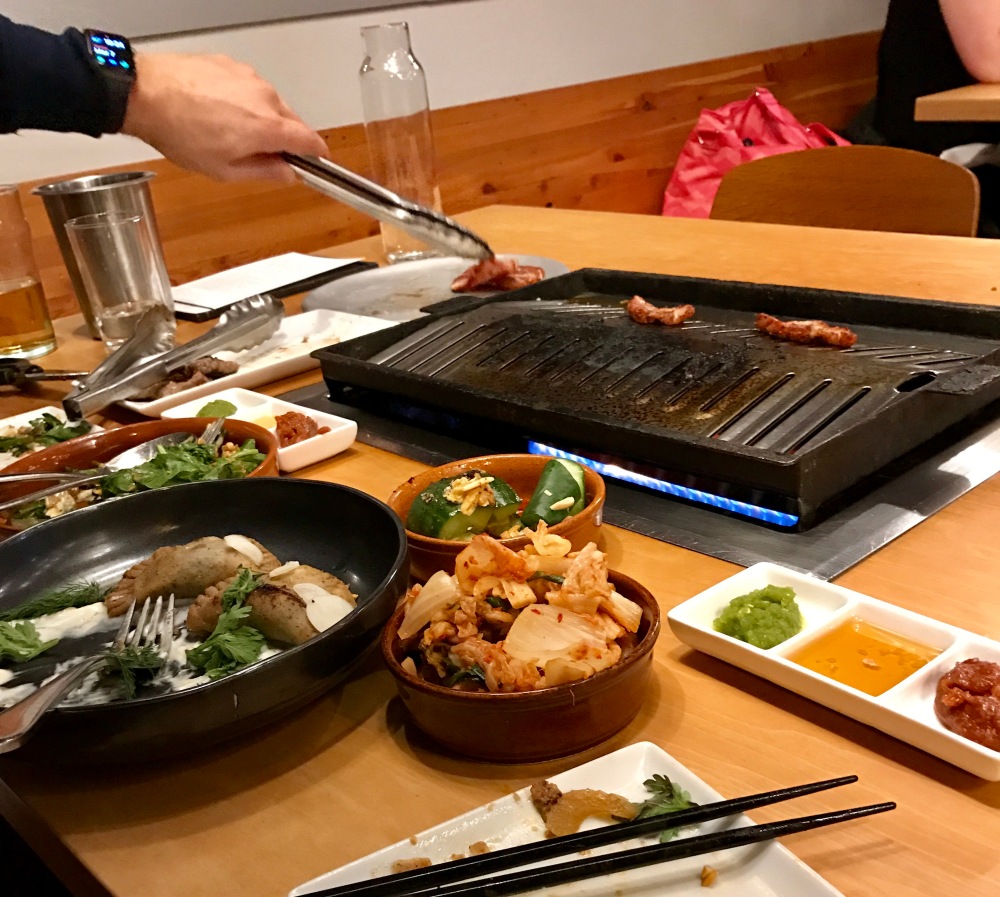 This picture doesn’t remotely reflect the amount of food we had. It was like hibachi but way better and I highly recommend checking it out. The food was amazing and it was such a fun experience.

Overall I was obsessed with this city. Yes it rained a lot, but we still walked everywhere (almost 10 miles a day according to my Fitbit) and ate some of the best food I’ve had anywhere. It’s a really cool city with so much culture and I can’t wait to go back! 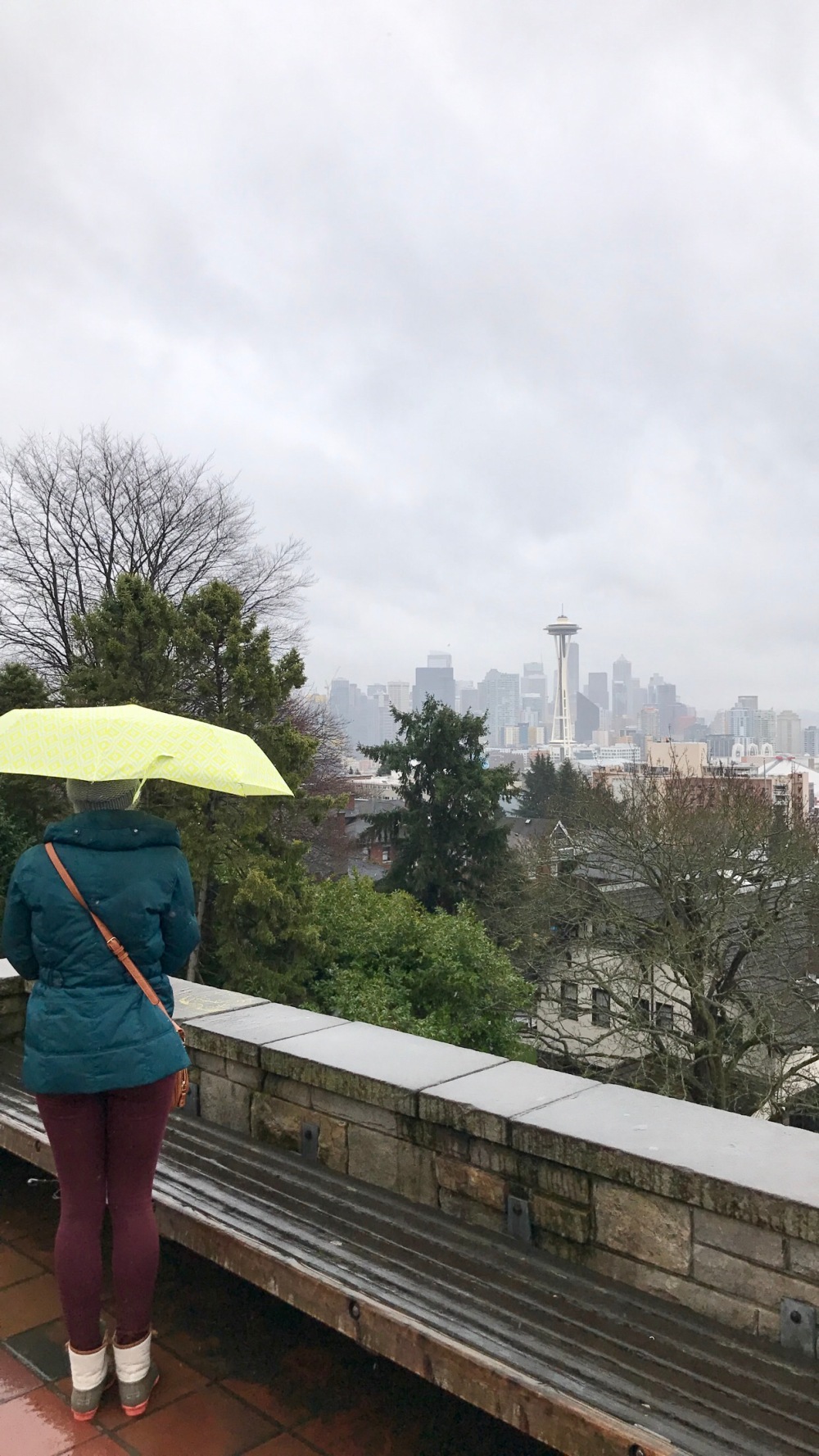