Okay this is going to be a long one because we ate SO MUCH FOOD and all of it was delicious and needs to be included.

We took a train from Stockholm to Copenhagen- it was about 5 hours and not a smooth journey but we made it. We stayed up in the Norrebro area of Copenhagen on Jaegersborggade, which is the most picturesque street and our AirBnb was AMAZING. Can’t recommend you stay anywhere else if you go. Or at minimum make a point of going up there for at least one meal.

There’s literally a Michelin star restaurant across the street (Relae) but because we were already doing Noma we decided against doing a second fancy dinner. Instead we went to Manfreds which was about 3 doors down. They have a small, vegetable-focused menu with small plates designed to be shared. Vegetable-focused, but then also beef tartare? Obviously I couldn’t eat this but the GS claims it was one of the best.

Personally I loved their corn with tomato butter and pecorino cheese.

After dinner we went to Istid (also on our street) where this girl had 5 pastel Kitchen-Aid mixers making ice cream to order with liquid nitrogen. It was such a cool thing to watch and the ice cream was incredible. The GS had tiramisu and I had salted caramel.

The next morning we had breakfast at Grod– we both got “porridge.” Mine had caramel sauce in it and was basically dessert but not complaining. 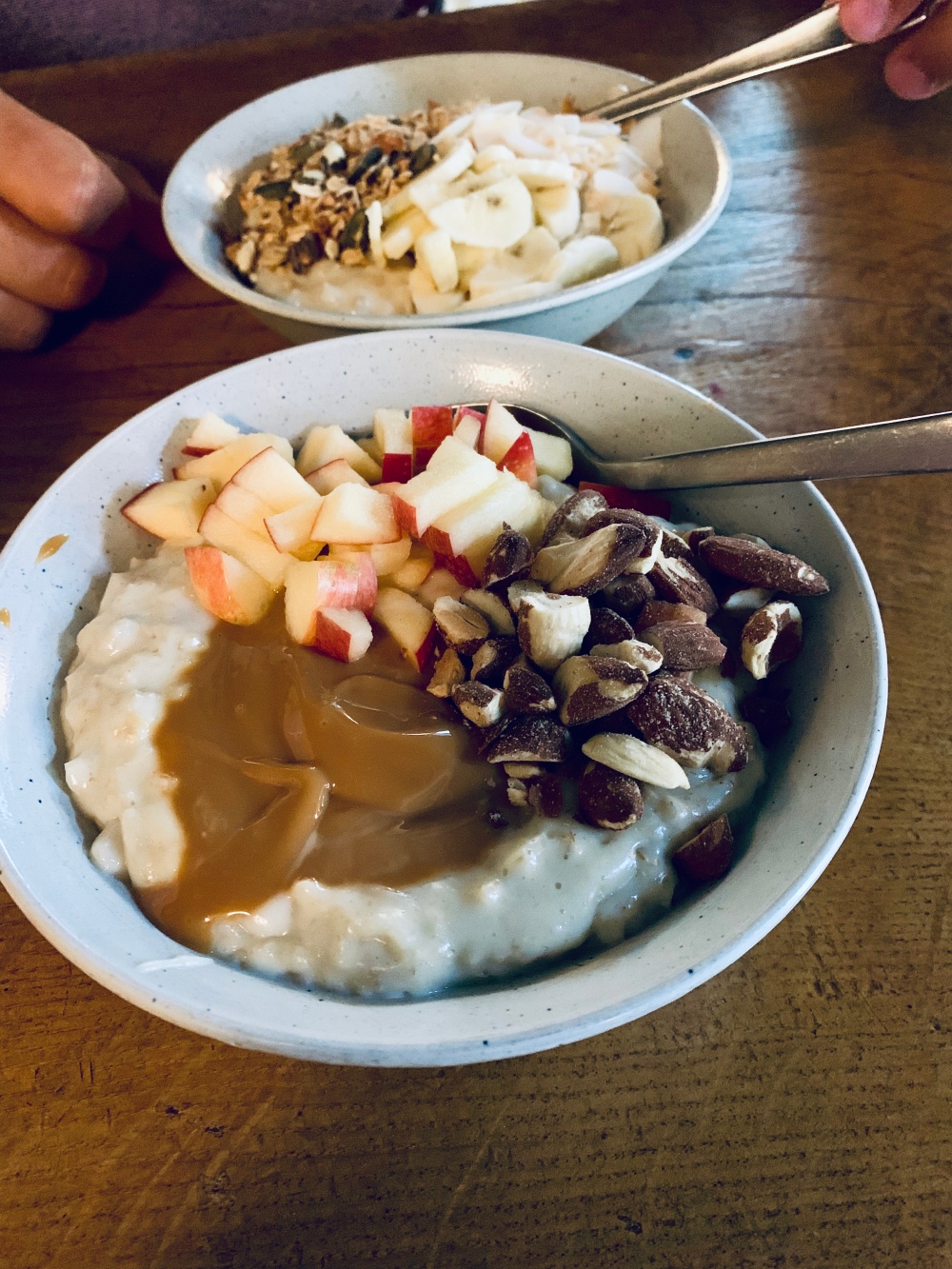 Then we started walking in the general direction of downtown but eventually the rain got bad enough that we hopped on a bus. We ended up going to the Danish Architecture Center to escape the rain. We weren’t intending to pay for tickets to tour but then the gift shop was so cool we decided to stay. They had an entire room filled with Legos were you could just sit and build stuff (obviously we did) and then a whole exhibit of the most incredible Lego building constructions. Then the main attraction shows you futuristic buildings being constructed all over the world. It was cool!

From there the rain had pretty much stopped so we started our tour of a bunch of places featured on the Copenhagen episode of Somebody Feed Phil, the ultimate travel bible. First up: Kodbyens Fiskebar for the fish and chips. This is a place you’d have to know to look for because it’s in the most random business park. The GS started with oysters and they casually asked if we wanted bread with them.

My face in this photo doesn’t even do it justice. It is hands-down the most incredible bread I’ve ever tasted and it was served with a whipped seaweed butter. It’s sourdough that is baked in a round cake pan and cut into cake-like wedges. The waitress must have known I was having a religious experience because she brought us a second serving of it. The fish and chips were also top quality but what I’ll remember until my dying day is that bread and butter. 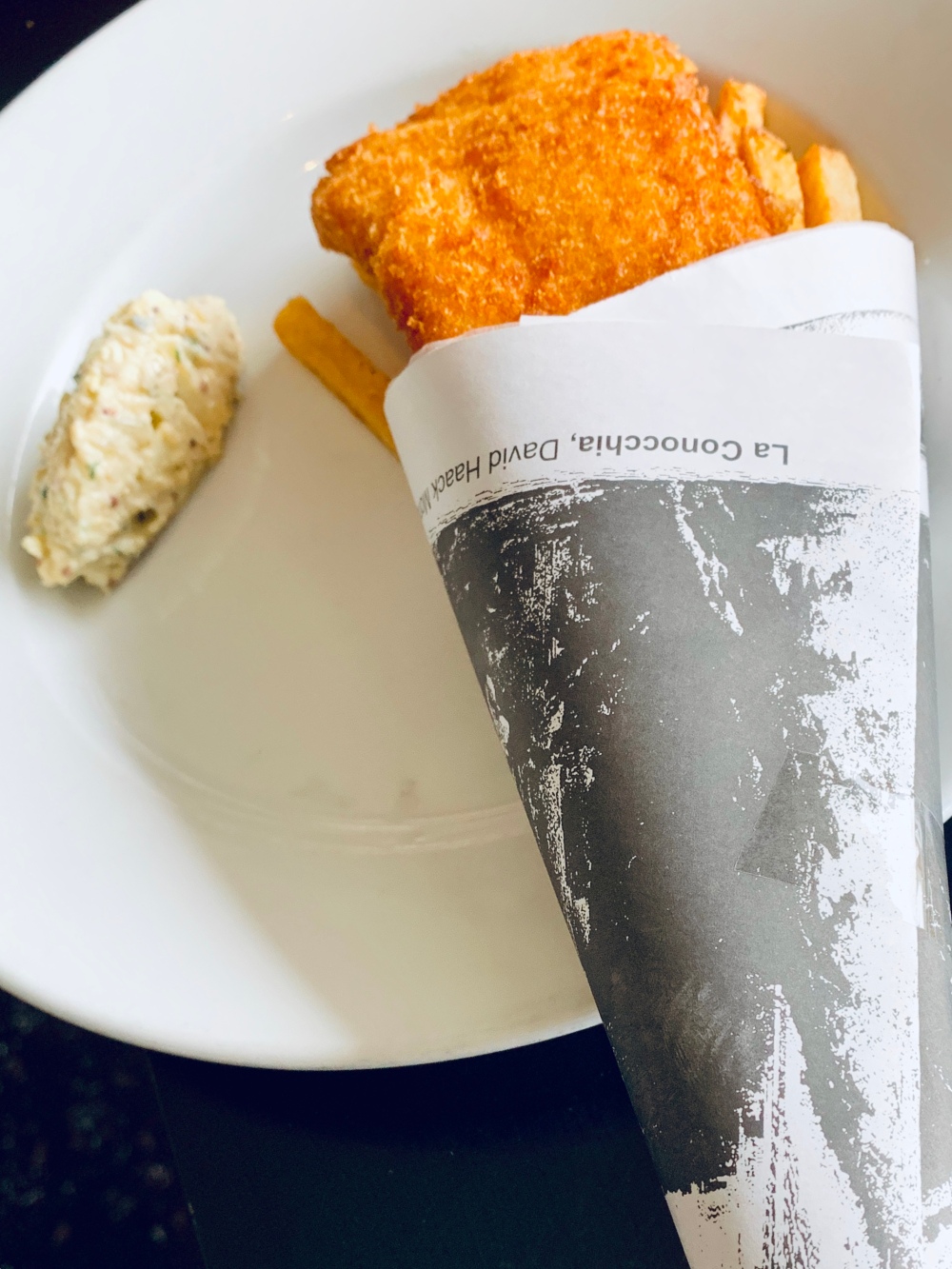 We stopped into Warpigs for the GS to try some of their beers. They are also doing very authentic American barbecue in there which was cool! It’s worth stopping in even if you don’t plan on eating.

Then Hija de Sanchez (also a Phil spot) where we tried their tacos. They only had three kinds so we just got one of each. It’s a hole-in-the-wall right in that same block. The tacos were really good! Not life-changing like the sourdough bread but very good. 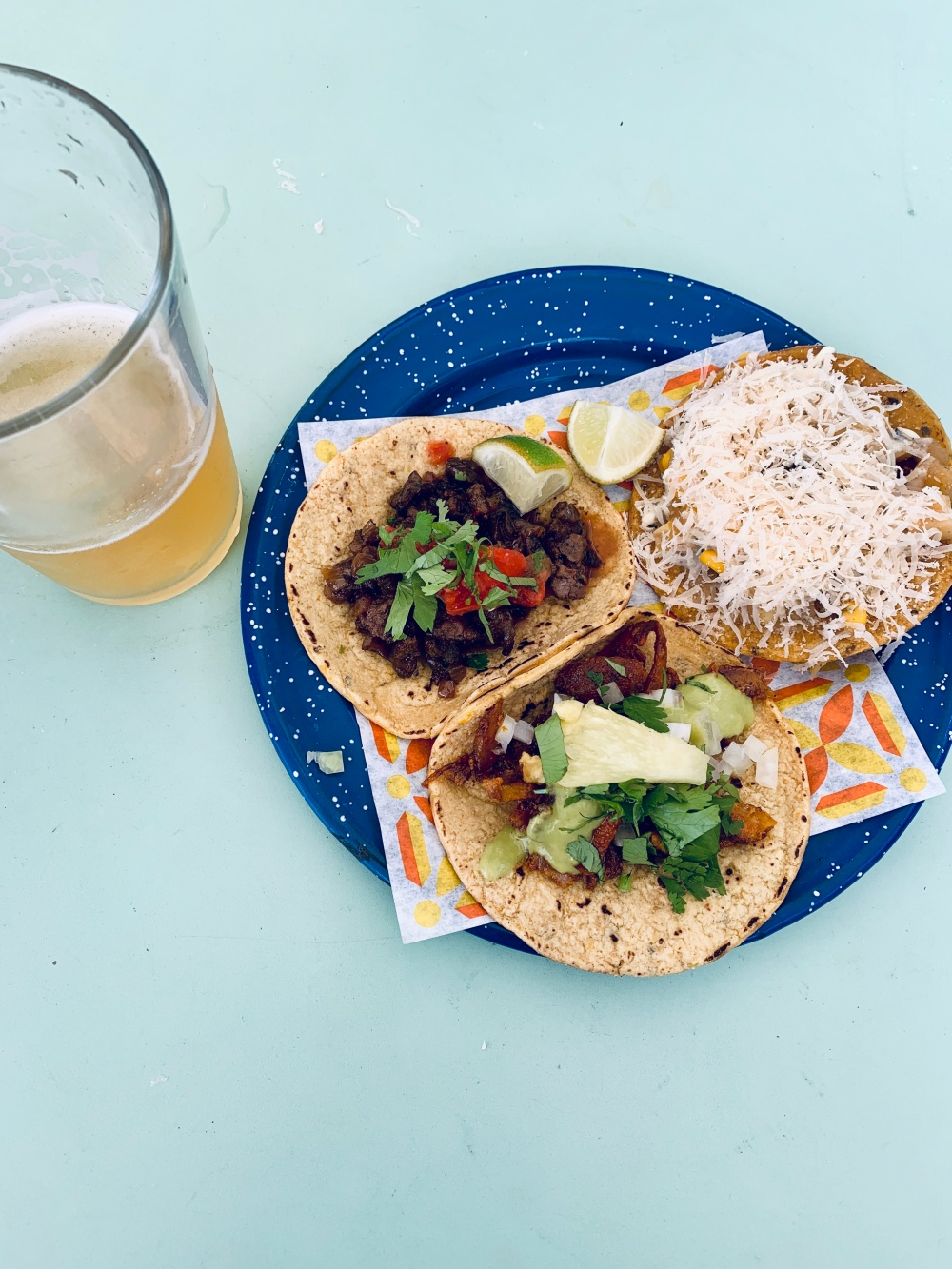 We took the metro up towards Osterbro to go to a Kombucha brewery, only to discover it was false advertising and that they didn’t actually have a storefront. Oh well. Walked from there down to Aamann’s Deli, which is famous for their smorrebrod- this is a Copenhagen thing and basically just means any open-faced sandwich. My options were limited because a lot of them had raw stuff on it but the chicken salad (with crispy fried chicken skin) was pretty good. It’s a little over-priced since you can get smorrebrod anywhere, but the walk down to that neighborhood was BEAUTIFUL so I recommend hitting that area either way.

Next- the DOP stand for a hot weiner! Hot dogs are one of the only things I don’t eat- just not a fan in general- but this pork sausage with wild garlic fully loaded was top notch street food. The GS particularly liked the fried onions on top for crunch. Also it’s in a great pedestrian-only shopping area so a good place to walk around.

Then we walked all the way back to our AirBnb where we digested for a bit before venturing back out for neighborhood exploring, and a stop in at Mikeller & Friends for a beer. They had an awesome non-alcoholic hazy IPA (Weird Weather) in cans. In general I would say it was MUCH easier to find good NA beers in all 3 cities than in the US.

Second full day: I got up and walked to a Body Attack class at SATS (a chain of gyms around Denmark and Sweden). This one wasn’t as crazy as the class in Stockholm but still fun! While I was there the GS borrowed the bike from our AirBnb and went for a ride. Copenhagen is 1000% a biking city- anywhere there is a road there is also a bike path.

Then we had a late breakfast at The Sixteen Twelve on our street. I had shakshuka and the GS had avocado toast with a tumeric soft-boiled egg. Both were a revelation on toast. 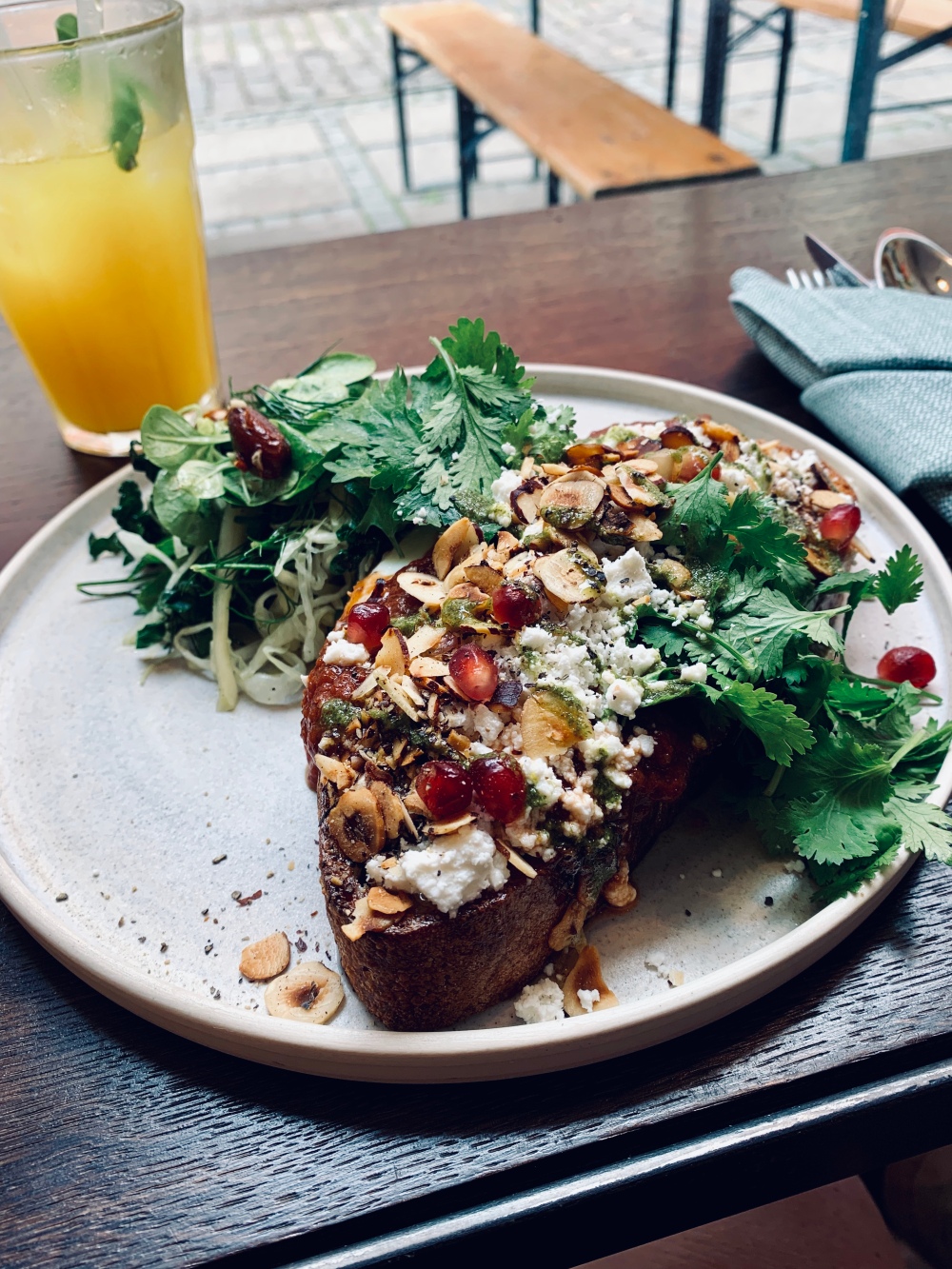 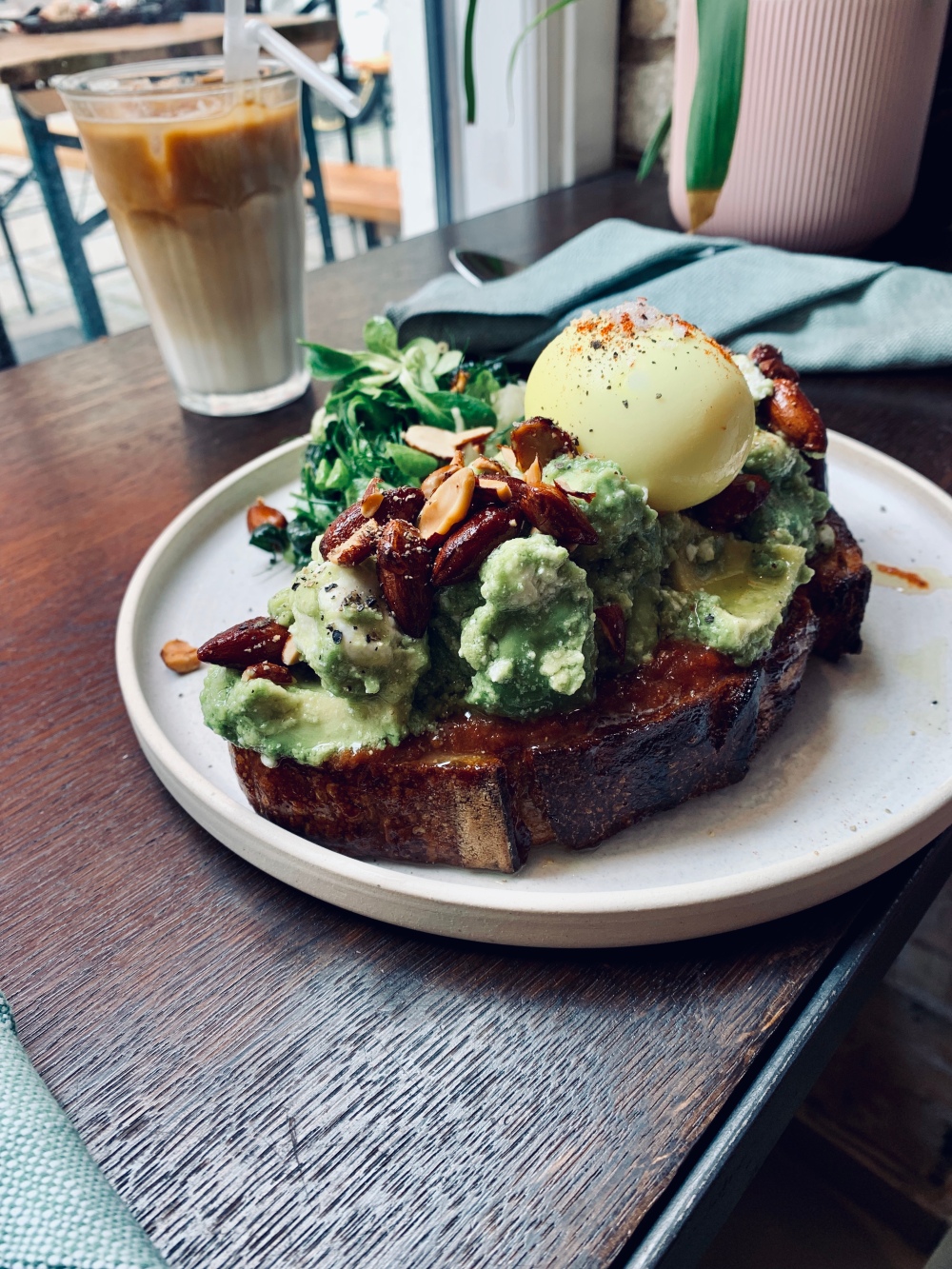 We started walking with the intention of hopping on the metro at some point but it was such a nice day that we wandered all the way downtown and across the bridge to Christianshavn. This is a super cute area right on a canal that is worth walking through. 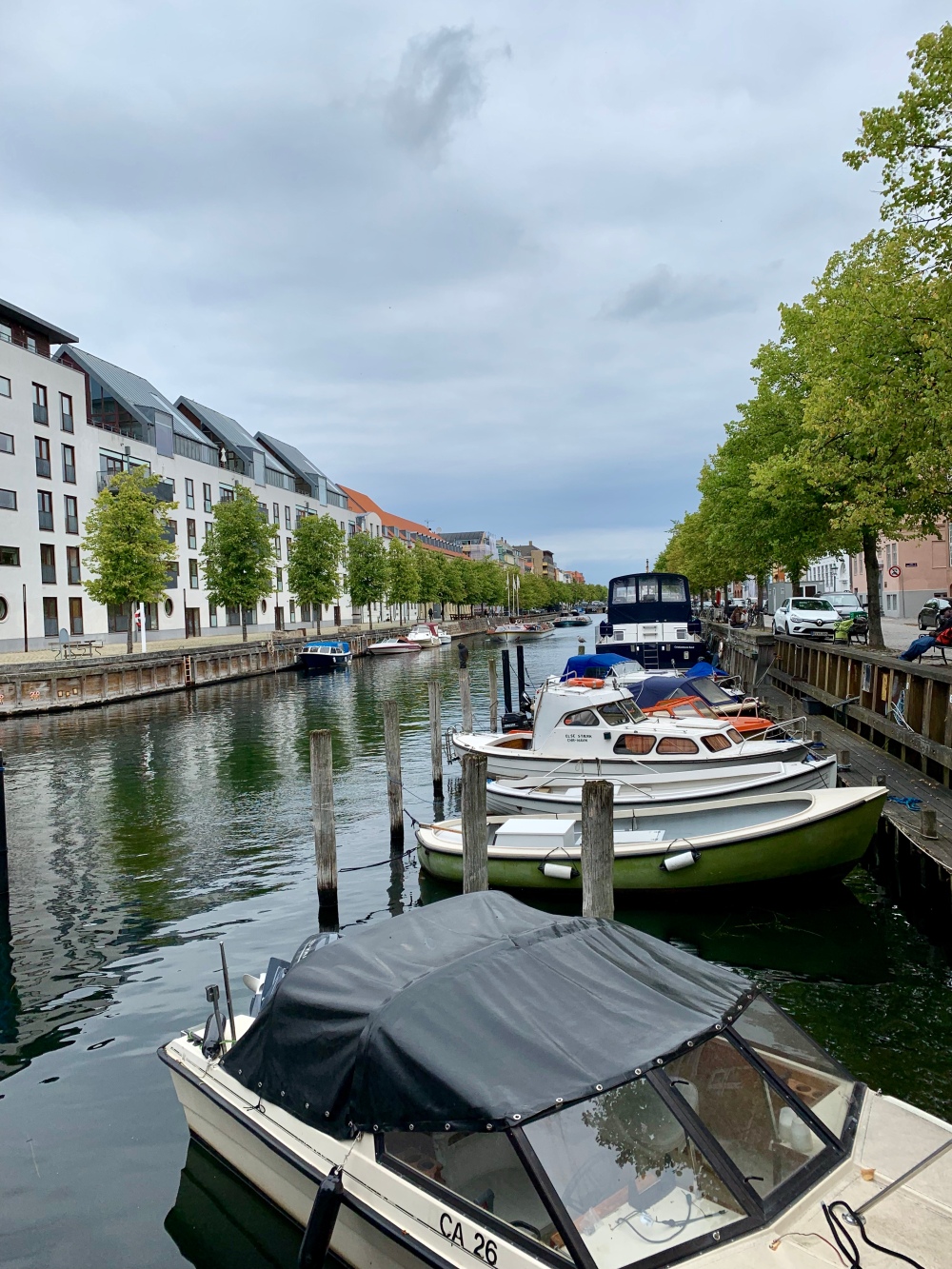 There’s a famous area called Christiania which is basically a hippie/squatters community legitimately separate from Danish law. Phil went so we figured we were fine, but it was essentially a paradise for buying marijuana and given that neither of us partake we felt a bit out of place. There was, however, a quite happy woman singing on the street as we walked by who proclaimed there was a “baby girl in that womb.” So if it’s a girl, we heard it there first.

Then kept walking all the way north to Broaden & Build. This is the brewery affiliated with Amass Restaurant, which is a new-ish restaurant opened by one of the former chefs at Noma. And the chef was sitting in the brewery when we were there!! 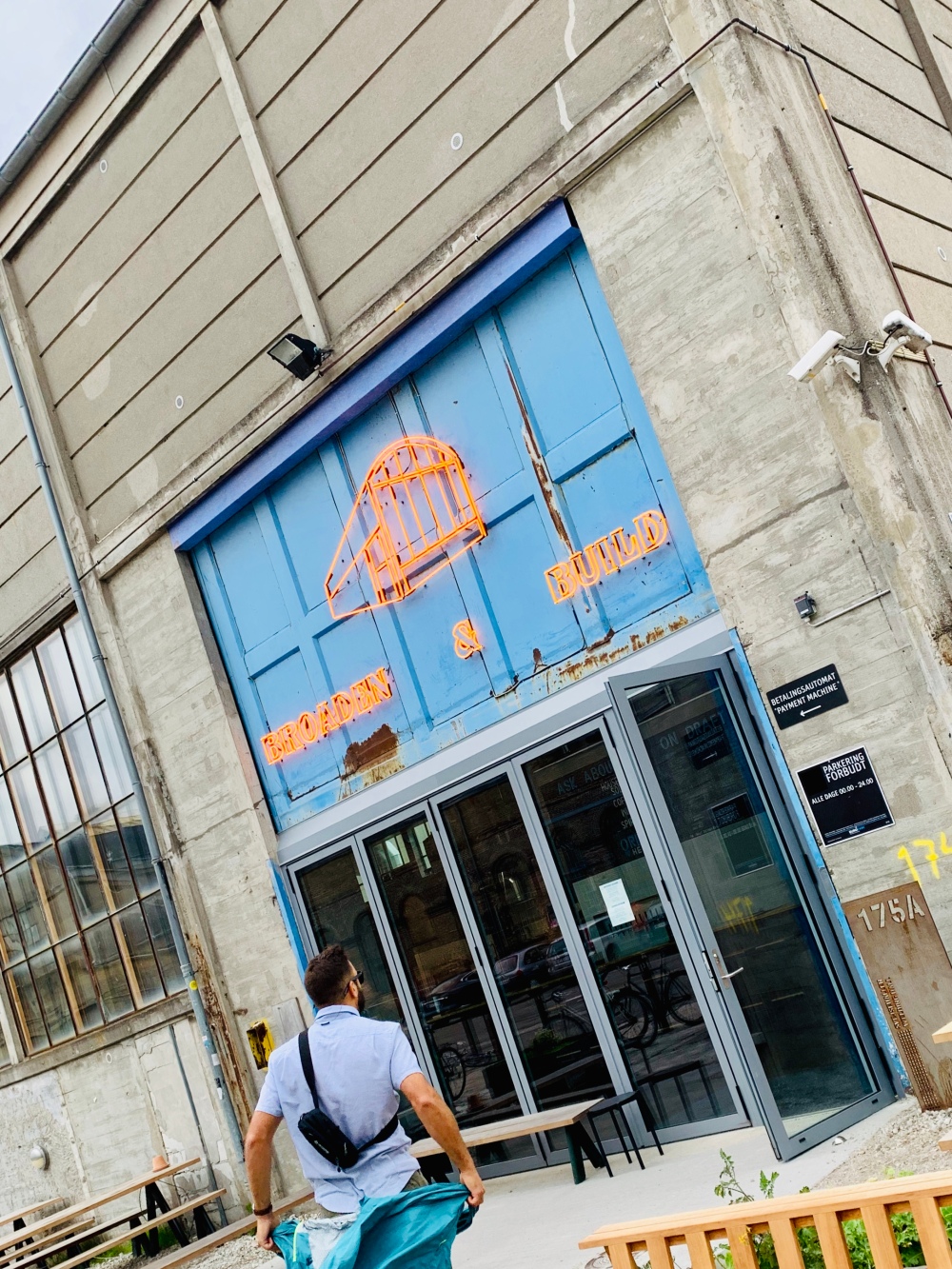 What I wish we had known about in advance is Reffen. This is the most unbelievable street food market I have EVER seen. It’s all constructed from shipping containers and they have every kind of food you could ever dream of. Given that we had Noma reservations we couldn’t really eat much there but we did get some momo (Nepalese dumplings) and some malawach (Jewish flatbread). If you’re going, dedicate an entire afternoon to walking around sampling everything.

And at last, there was Noma.

This was one of the most bizarre and transcendental eating experiences of my life. When we showed up they escorted us into a greenhouse to wait for the rest of the group table members to arrive. They offered beer, wine, or tea while we were waiting.

Then when everyone was there they brought us inside where we were greeted by like 30 chefs all standing in a row. That part was actually a little weird- closest I’ve ever felt to being on a red carpet. There were 20 of us at a huge table in one room, and we selected either a wine pairing or a juice pairing. There were 18 courses and they changed the pairing like every 3 or 4 courses. Each time, one of the chefs who had prepared the course would come out and explain it. I went back and forth on whether to take photos and ultimately I’m glad I did, plus everyone else at the table was doing it and I’m a follower.

Given the season, we had a vegetable-focused menu. In other seasons they do seafood or meat focus. It wasn’t fully vegetarian but we didn’t have any courses where a protein was the star. I won’t subject you to all 18 but here are some of the best/most weird.

First course was a butterfly made on a super light cracker with edible flower petals and bee pollen. Each one came in a box with a glass lid.

Courses 4-6 were focused on mold. Let me say that nothing we ate here was normal. You have to be a person who is willing to put ANYTHING in your mouth to make it worth coming here. The GS said before we went in that the chef could literally serve us shit on a plate and tell us all about how it was carefully curated and he’d try it. So, mold. 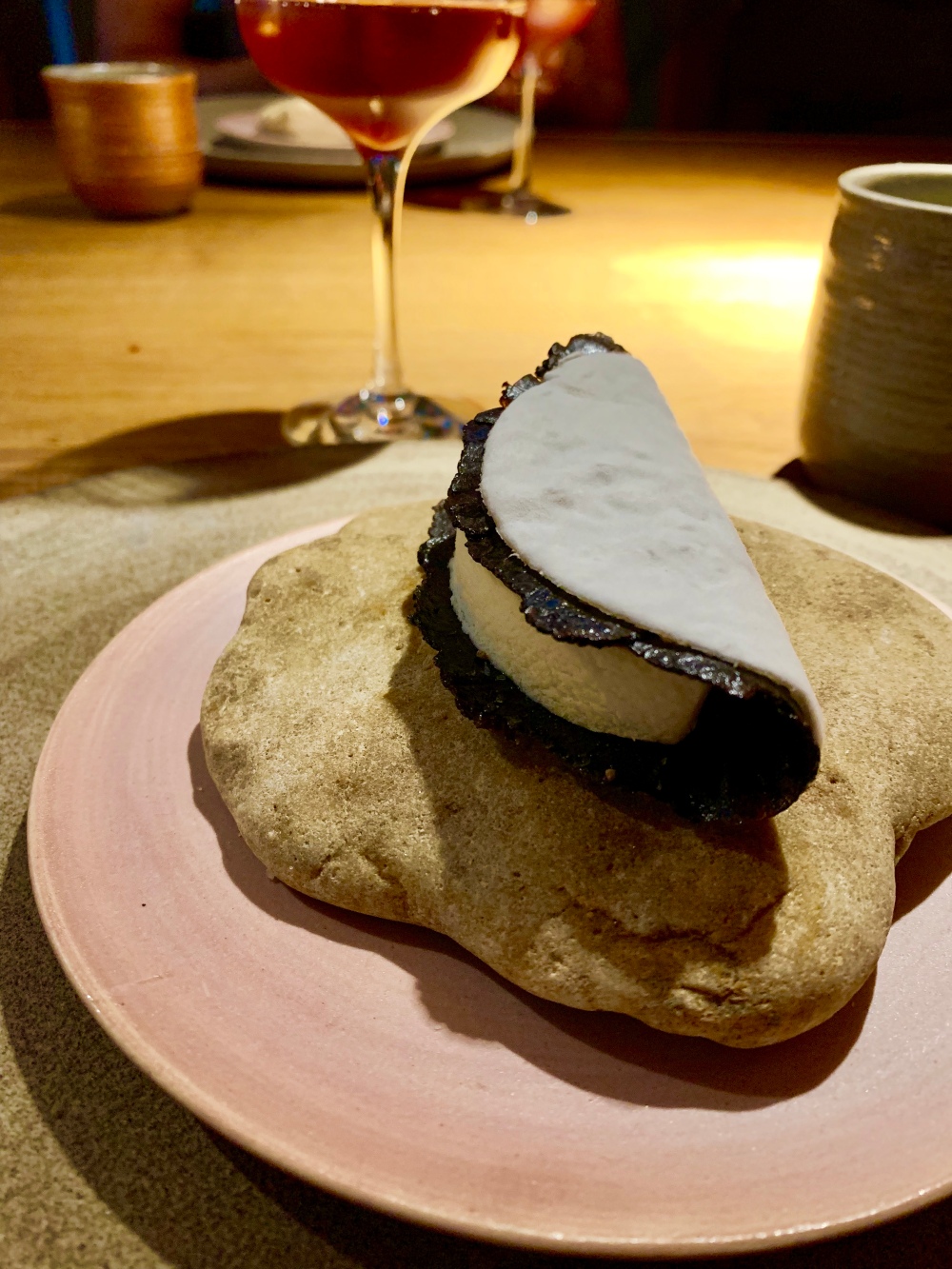 This was a “mold pancake with truffle.” They explained how they make the mold out of barley, and then it was wrapped over shaved truffle and inside was camembert cheese. This one was a bit rich for me- I took two small bites and then the GS finished the rest. But a ton of people at the table said at the end that it had been their favorite course. The GS and I preferred the “mold pie-” this cured egg yolk covered in mold on a cracker with more truffle. 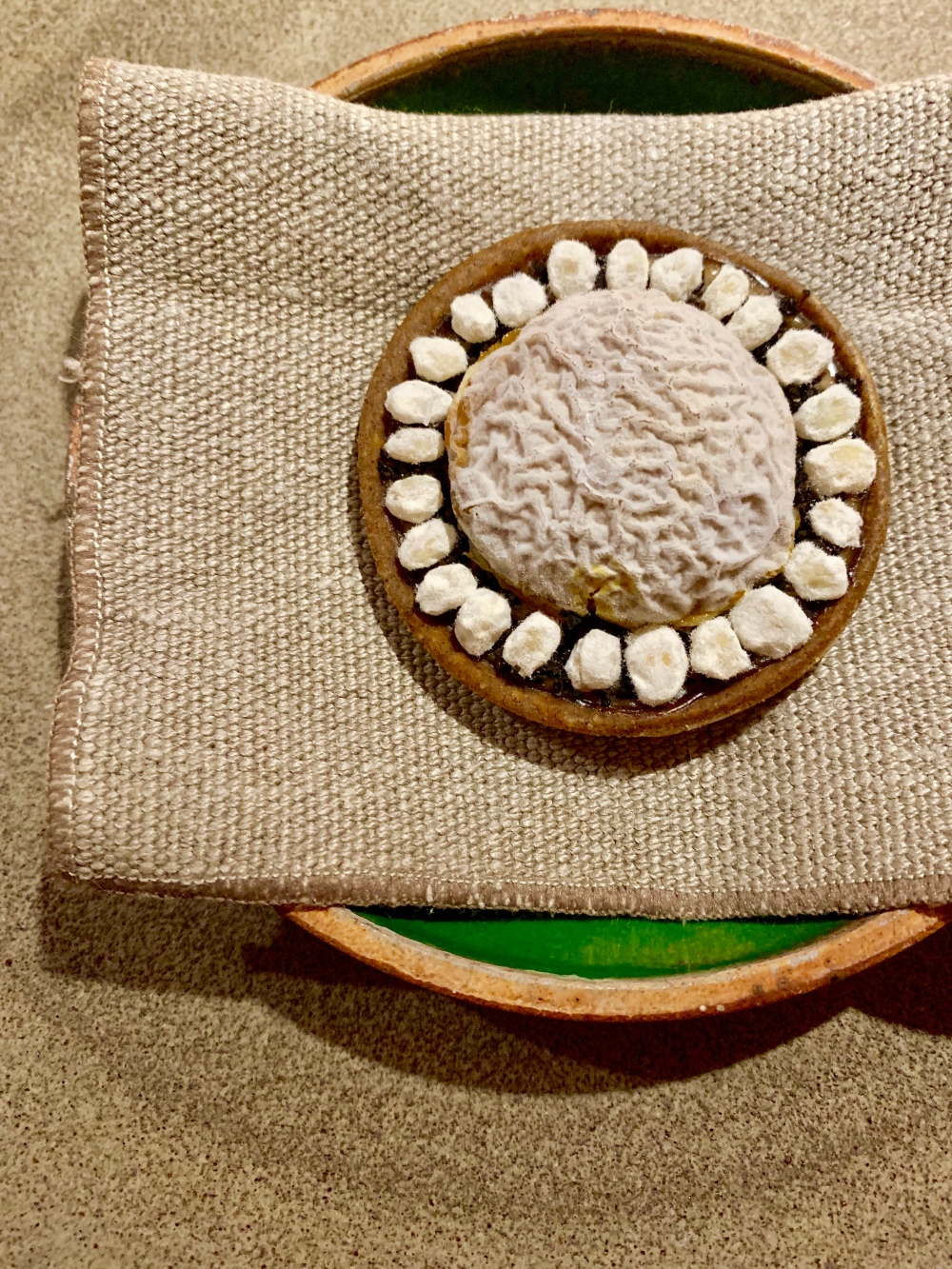 One of my favorites was this berry soup which was sweet and spicy from chili oil and had “tomatoes stuffed with tomato.”

There were three desserts, all of which I loved, but was most impressed by the presentation of this one because someone had to use tweezers to stick all of those petals in this “elderflower mousse and seabuckthorn” cake. 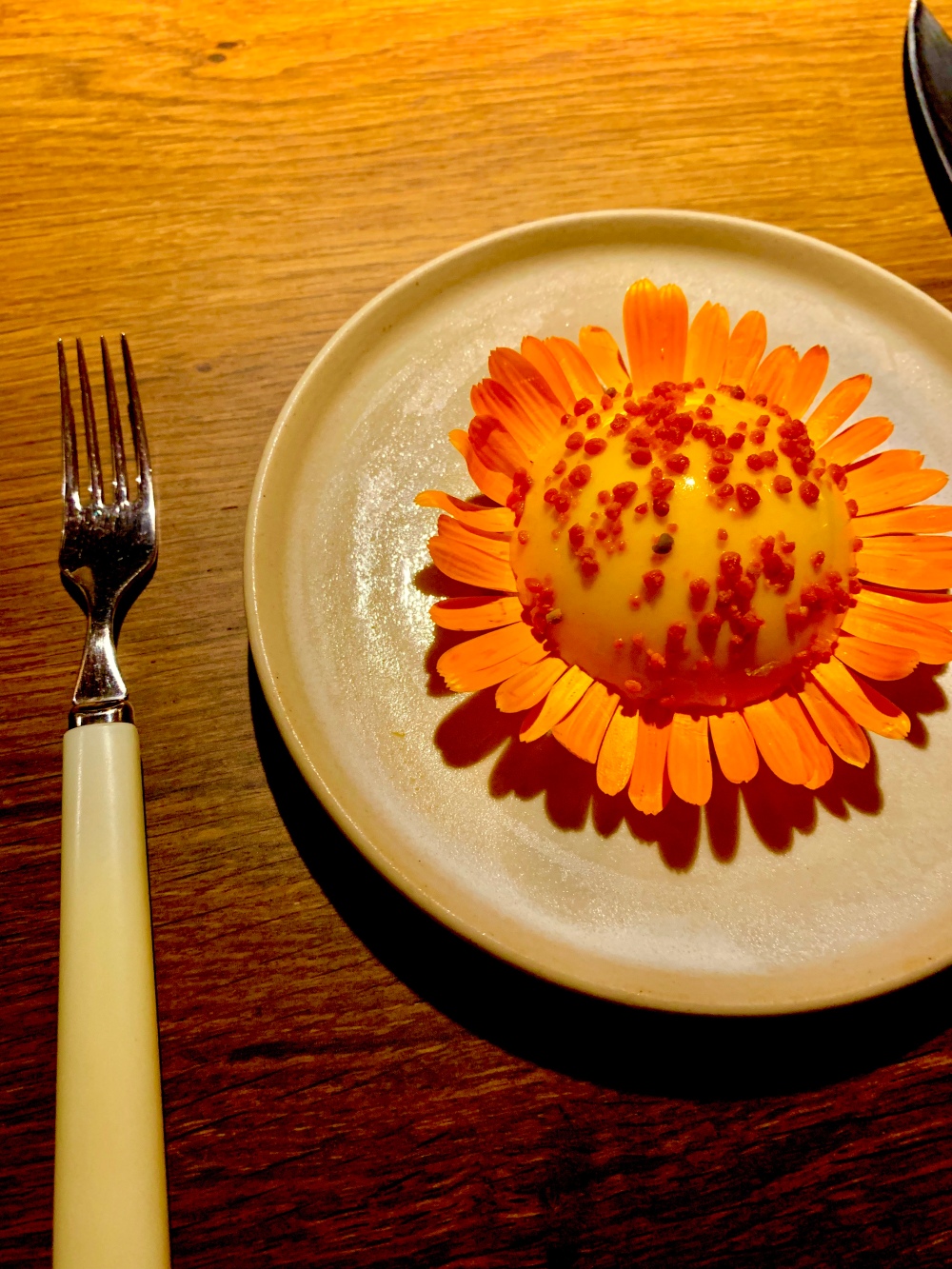 Afterwards we got a little tour and they told us they have EIGHTY chefs and front of house staff serving 110 diners each night. That is clearly an insane ratio but I’m sure the majority of the chefs are staging (working for free). They said some of the courses require 10 chefs to prepare and plate them. And the kitchen is open so you can see them all working and communicating with each other. It was very cool. 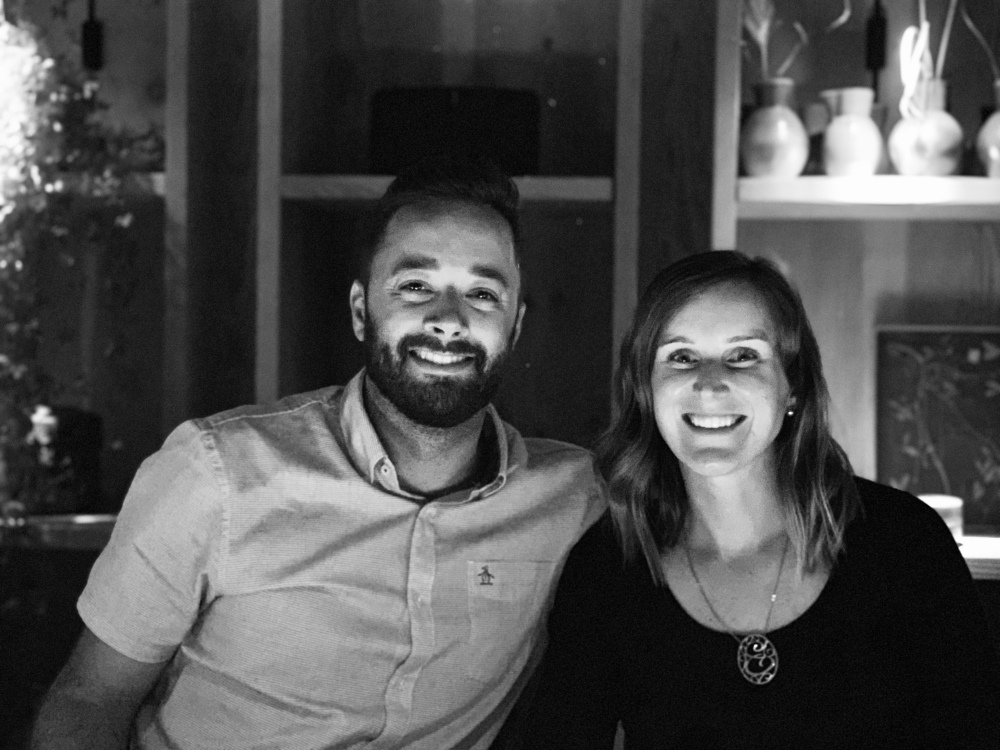 Aaaand after it was all over, we were probably the only two diners who declined a cab and opted to walk in the rain to catch the 43 bus. Staying humble.

Our last morning we grabbed some pastries at Meyers Bageri and coffee at Coffee Collective (both on our street) for breakfast and headed to the airport for Amsterdam!

Copenhagen is 1000% one of my favorite cities I’ve ever been to and would definitely go back. Not sure I could swing a Noma visit every time but there’s so much other food we didn’t even have time to try. GO THERE.