We got to Amsterdam on a Thursday evening right around dinner time. We walked from the train station to The Times Hotel which is in the Jordaan area, right on a canal. I highly recommend staying in this area because it was beautiful but I don’t necessarily recommend our hotel. Let’s just say they hired a very gifted photographer for their website. It was fine, but expensive for how tiny the room was. But this was our canal view! 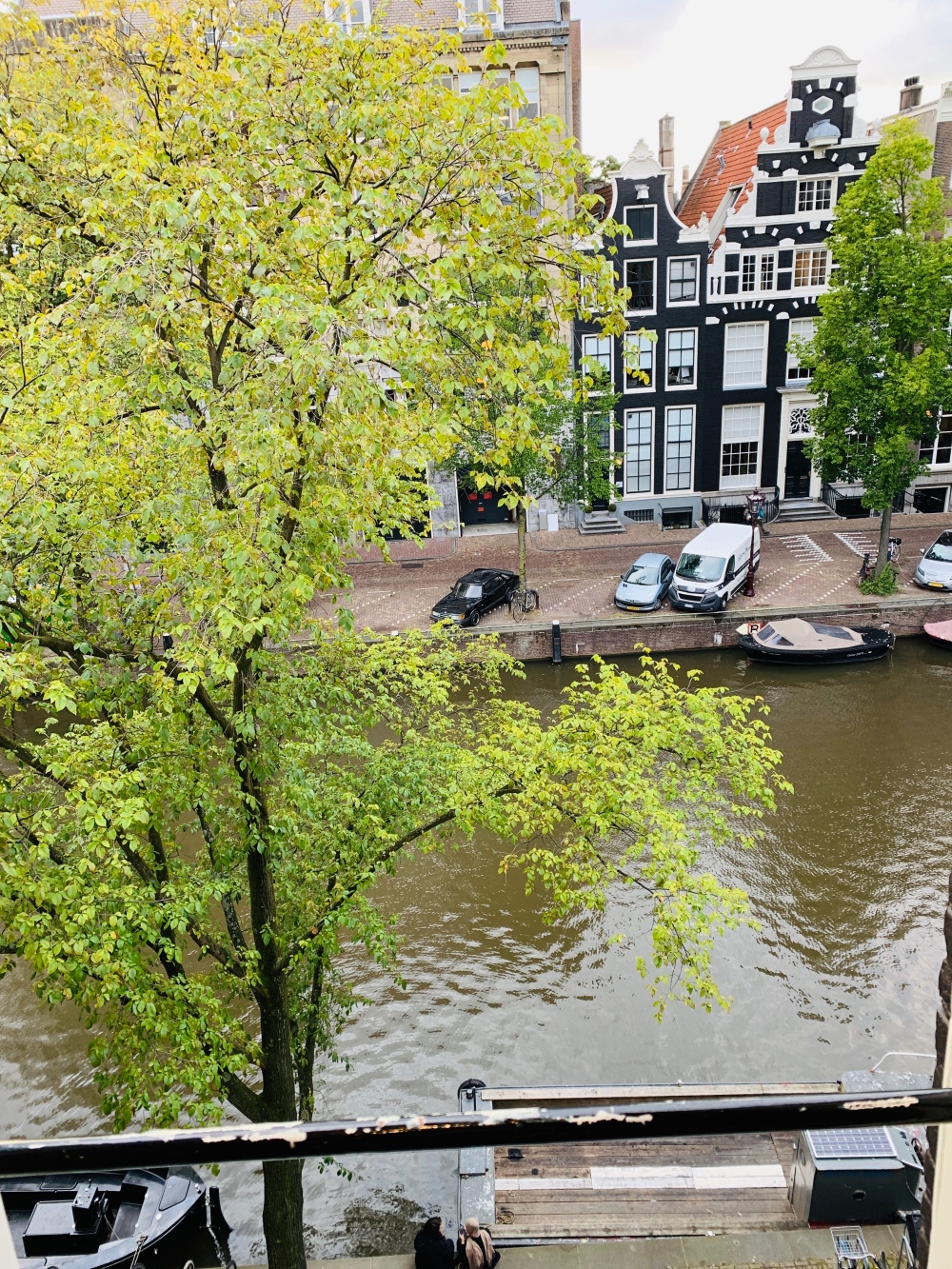 We walked to Fou Fow Ramen for dinner. I should mention I was sick for almost our entire trip and at this point had almost completely lost my voice, so I ordered the spicy ramen thinking it would clear out my sinuses. When it came to the table I said to the GS “Oh no!! I’ve lost my sense of taste!” He tried it and said “No… it just doesn’t taste like anything.”

I’m still mad about this especially since it was packed and had amazing reviews. Maybe Dutch people don’t know good ramen?! I don’t know, but skip it.

My evening was saved by the “apple pie” at Winkel 43. This is an Amsterdam staple and if you click on their website, you’ll see it right on the homepage. It was very delicious. But… it’s not pie.

It’s more like apple cake (I’m actually thinking of adapting this recipe to create something comparable). Not complaining and it took everything in me to not go back for another slice every night, but it’s not pie.

The next morning we were up early because I had gotten us tickets to the Anne Frank House. After being so spoiled with delicious breakfasts in Copenhagen, we were back to the general European issue of bad breakfast and nothing open early. An additional wrinkle in Amsterdam: when you’re doing a Google Maps search for “coffee” you also get all the results for the weed stores which are listed as “coffeehouse” but then in reality are “cannabis stores.” I found this quite annoying.

I highly recommend the Anne Frank House and I’m glad I took my friend K’s advice to get tickets first thing in the morning. You have to buy them in advance but they sell a certain number of tickets for each 15 minute block throughout the day, so by late morning/afternoon it can be really backed up. It takes about an hour to walk through with the audio tour and we were both glad we went.

We headed in the general direction of Foodhallen, which is kind of like a scaled down version of Time Out Market in Lisbon. We stopped on the way at Lot 61 so the GS could get a cold brew coffee- few and far between in Amsterdam but theirs is really good. Foodhallen’s website said they opened at 11 and we got there around 11:40, only to discover that most of the food stalls didn’t open until noon. How annoying is that?! We got a banh mi and some bitterballen to snack on. Bitterballen are little fried balls of different things (meat, cheese, one of ours was bouillabaisse) that are SUPER crunchy on the outside and soft and melty on the inside. 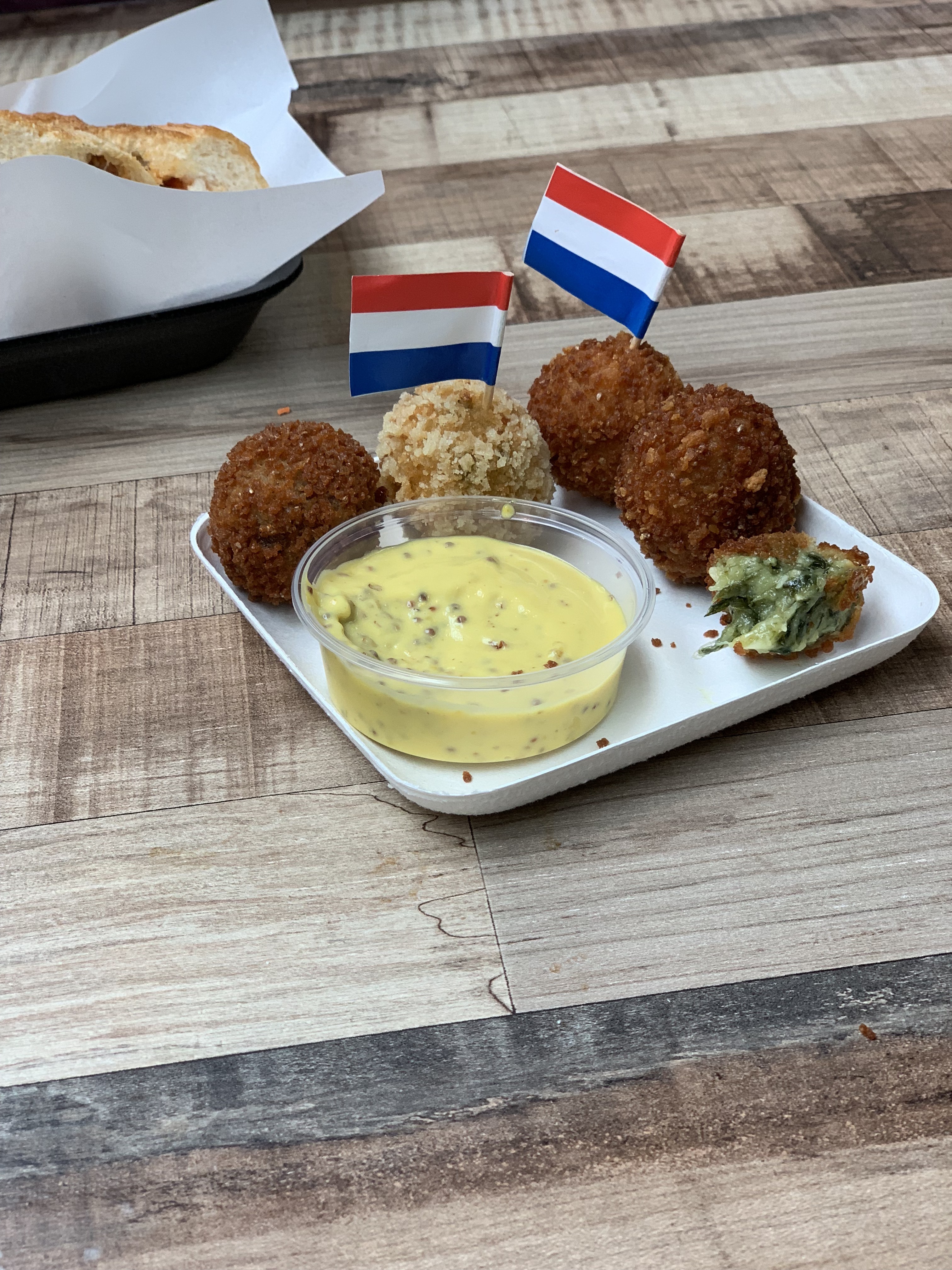 From there we started walking toward the Albert Cuyp Market. Amsterdam has these huge street markets all over the place, and that’s your best bet for street food. I had stroopwaffel, which you’ve probably seen before but is heavenly when made fresh in front of your face, and poffertjes which are like tiny pancakes with butter and powdered sugar. The GS also had raw herring with pickles and onions- had to skip that one.

I should mention that Heineken is right near this market but we didn’t go because they require you to buy a ticket and do a full tour (it’s like $20/person). But it does look quite large and impressive so if you like Heineken you should go!

Or maybe get better taste in beer. Just kidding.

We kept heading east and went to Brouwerij’t IJ, a brewery inside a windmill! It was more like a bar than a brewery, and I was annoyed that they do beer flights but don’t let you pick which 5 beers you want. I also noticed that the way they were cleaning their beer glasses was really unsanitary and then I wanted out. These are the things you notice when you’re sitting in breweries sober. Bar Langendijk is right there, too, and they also have a bunch of craft beers and a more chill vibe. 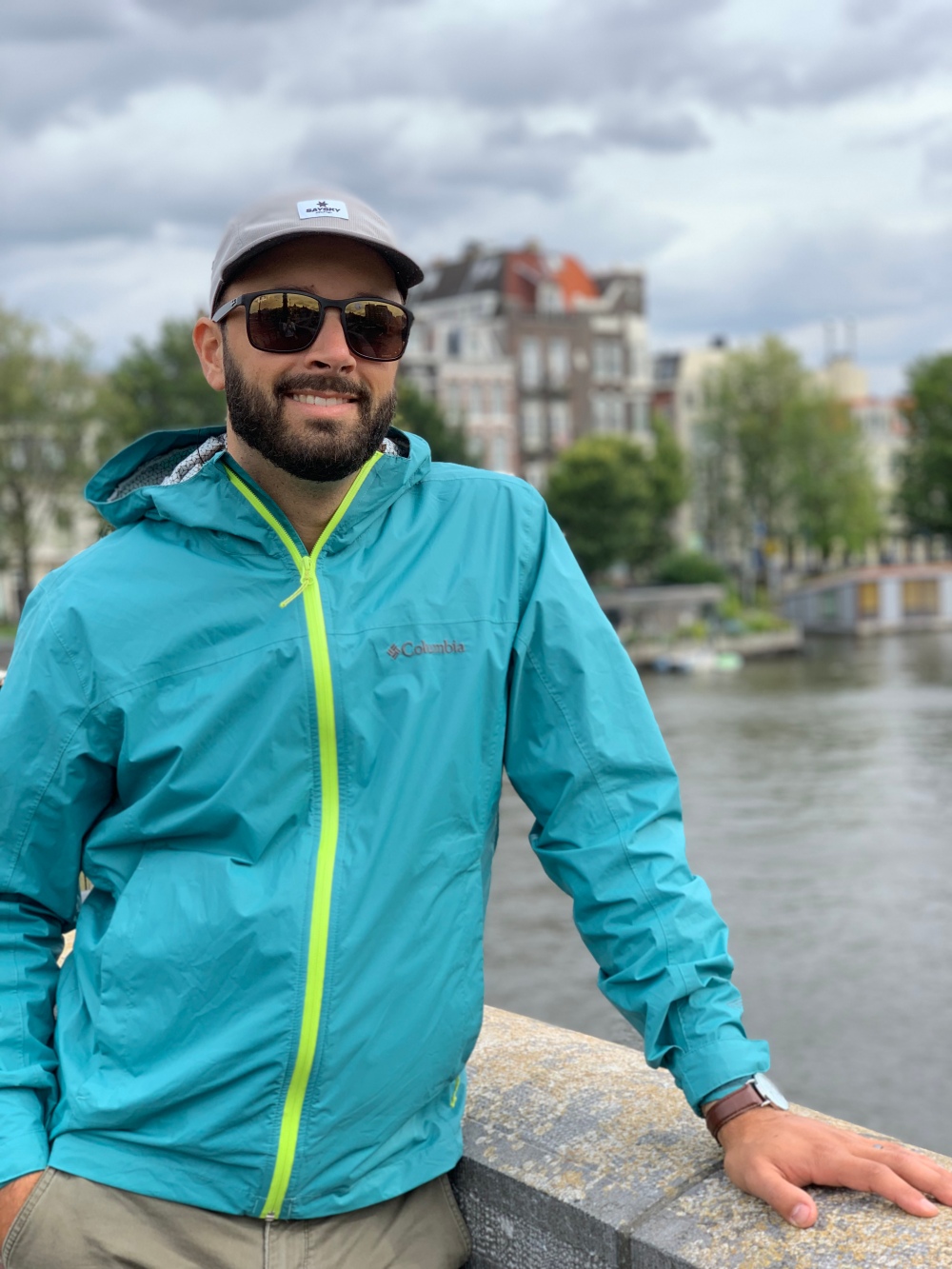 Then began the long walk back to our hotel (this day was 11+ miles) where we quickly regrouped and headed back out. We went to the Amsterdam Cheese Museum which is less of a museum and more of an opportunity to eat 100 cheese samples for free. It’s a win win. We ended up loving this “bunker-aged” Gouda so much that we bought it, along with a little jar of the honey mustard it was served with.

After eating all that cheese we got more cheese at La Perla Pizzeria. This is a tiny place; they actually have locations across the street from one another- they make the pizzas and do takeout on one side and the restaurant and bar is on the other side, and the servers run back and forth. The pizza was very good!

The next morning I went to Club Marnix to take a Body Pump class and it was SO much fun. I met the instructor before class and he asked me if I wanted to team teach with him but I politely declined and said I just wanted to participate. He taught the class probably 60% in Dutch and 40% in English which was helpful. I was so happy I did a class in 3/3 cities- such a cool experience. This was my 6th class in a foreign country and the first time I got the guts to ask the instructor for a selfie.

The GS’ friend Jan from study abroad came to spend the day with us! He lives in Dusseldorf so it was like an hour and a half train ride for him to Amsterdam. We ventured over to the Noord area which is east of the big canal, and the only free boat ride in the city! Unfortunately we took the wrong boat which meant we had a long walk up to IJ Hallen– the largest flea market in Europe!

It’s so big that you actually have to pay 5 Euro just to get in, but then they have everything. Obviously some stalls with junk but then a LOT with really nice vintage clothes and furniture. If only we were able to buy anything. But it was fun to browse!

No, I didn’t buy this vest.

Then we went and got lunch at Pllek, which is right around the corner and SUCH a cool spot. It’s constructed from shipping containers and has a huge outdoor area, and some of the coolest bathrooms I’ve ever seen. Plus the food was good and the service was really fast.

We hopped on a bus down to visit Walhalla Craft Beer and Oedipus Brewing. The boys decided the beer was better at Walhalla, but Oedipus is a super cool space. AND when I went to the bathroom there they had a Union sticker and a Snake Hill sticker. Union is a pretty prominent brewery in MD now, but Snake Hill is literally a hole-in-the-wall bar a few blocks from our house. What are the chances?! 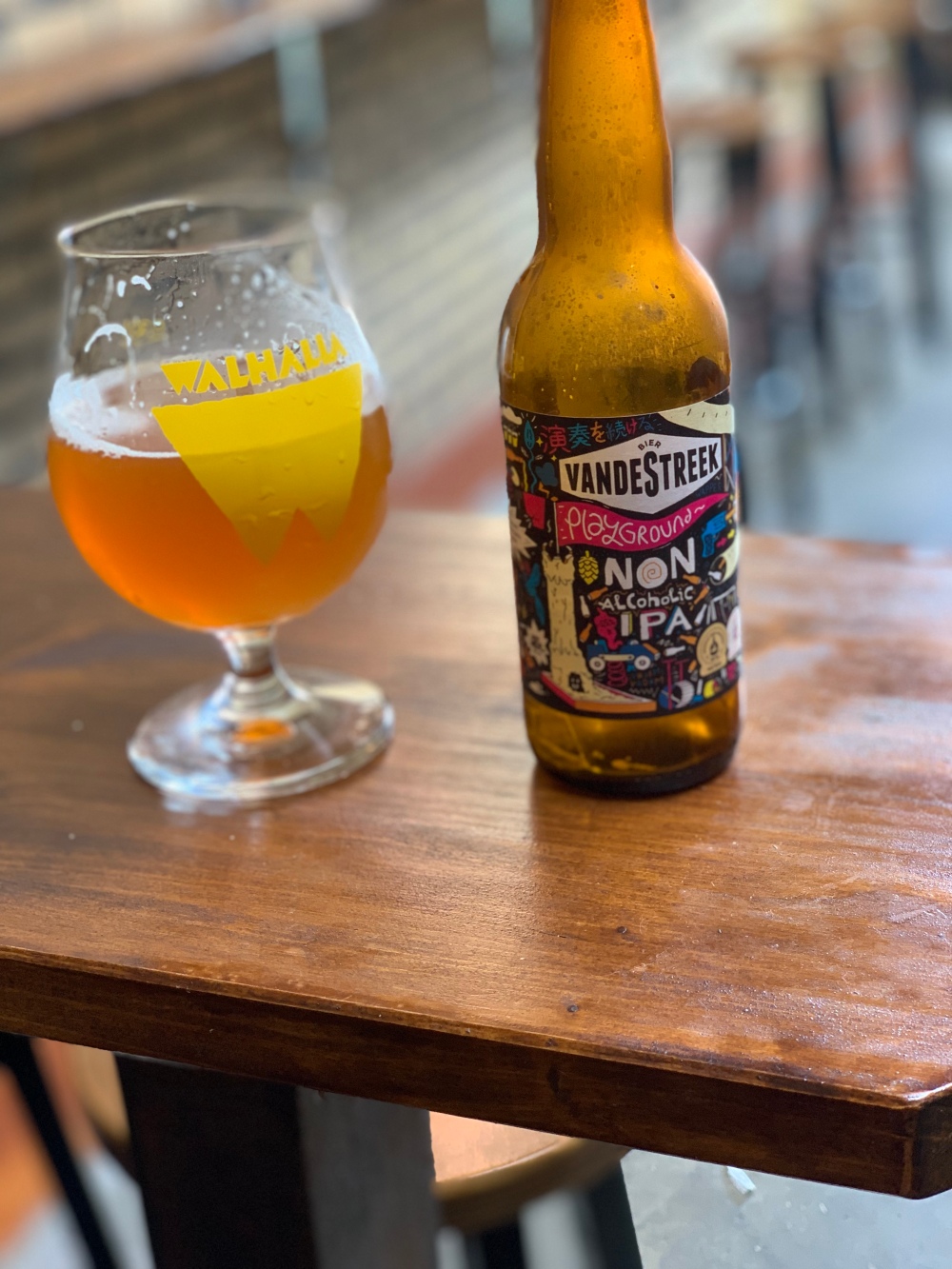 Then we took the ferry back and walked Jan to the train station. It was so nice of him to come hang with us for a day and crazy to think that those two studied abroad together 10 years ago and have stayed friends- he even came to Baltimore for our wedding last summer.

On our walk back from the train we stopped at Lebanese Sajeria and this is among my highest rated food in Amsterdam. It’s a tiny hole in the wall and they only have like 4 things on the menu- E got the beef and hummus and I got za’atar and halloumi and we got to watch them make it fresh. Ate them on a park bench on the canal- perfection.

(I’ve also heard that Van Stapele Koekmakerij right across the canal makes “cookies from God” but they were closed when we were over there and when we walked by the next day the line was around the block. Like the Georgetown Cupcake of Amsterdam. So this cookie monster can’t say one way or the other whether it lives up to the hype.)

The next morning we took the train up to Zaandijk to see some windmills. I can only in good conscience recommend this if you go at like 7AM when the cheese factory and the wooden shoe place and all of that other shit is closed, unless you like being surrounded by Instagram influencers, slow walkers, and Asian tourists with selfie sticks.

It is very beautiful there but just insanely crowded. Luckily we had sort of planned ahead- we stopped at Gebroeders Niemeijer bakery on our walk to the train and grabbed some fresh bread, and brought our bunker cheese and mustard from the cheese museum for a picnic lunch. We found Kooger Park away from all the hubbub and ate there and it was fabulous. Reminded me of eating just bread and cheese for lunch one day in Nice. You should 1000% go to that bakery and get the “boule” loaf- kind of a whole wheat sourdough and I’m only slightly embarrassed to say we ate the entire thing. 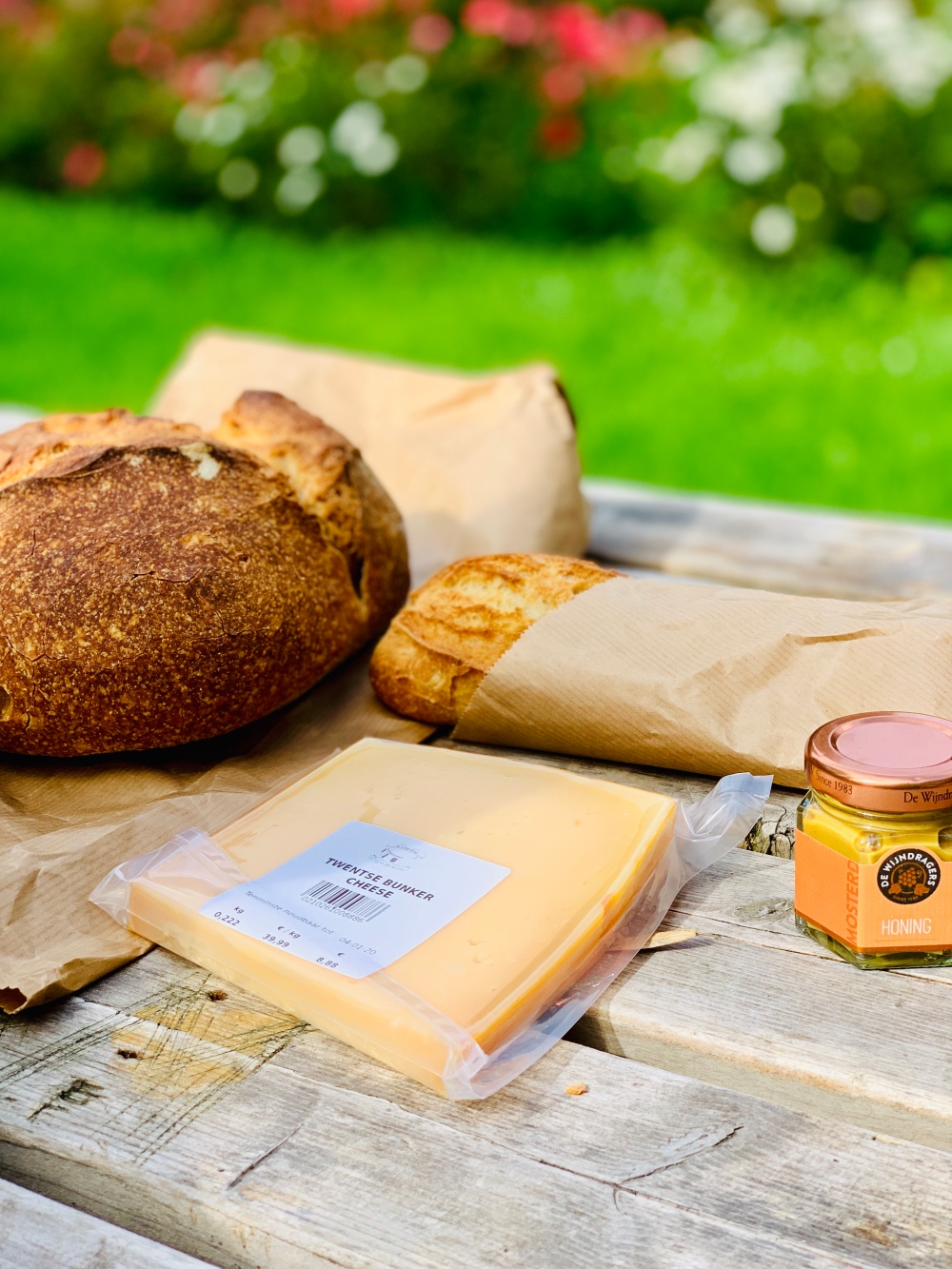 We took the train back to the city and walked/wandered for a while before heading back to our hotel to get ready for dinner. We hadn’t really done a nice dinner out in Amsterdam yet and it was our last night, so I found Balthazar’s Keuken and made a reservation. We went to Beer Loves Food first for a drink- I had a Brewdog Punk AF (alcohol free! ha!) IPA, and the GS tried a couple of local pale ales.

I cannot recommend Balthazar’s highly enough. They have a set menu- an appetizer tasting platter with 5 different things on it, the choice between two different entrees, and dessert. The food was really different and all really delicious. We especially loved the beetroot marscarpone and the celeriac tartare, and then we got one of each entree: rose fish and duroc rib. Dessert was a madeleine with hazelnut and chestnut. And it was very reasonably priced- must go. 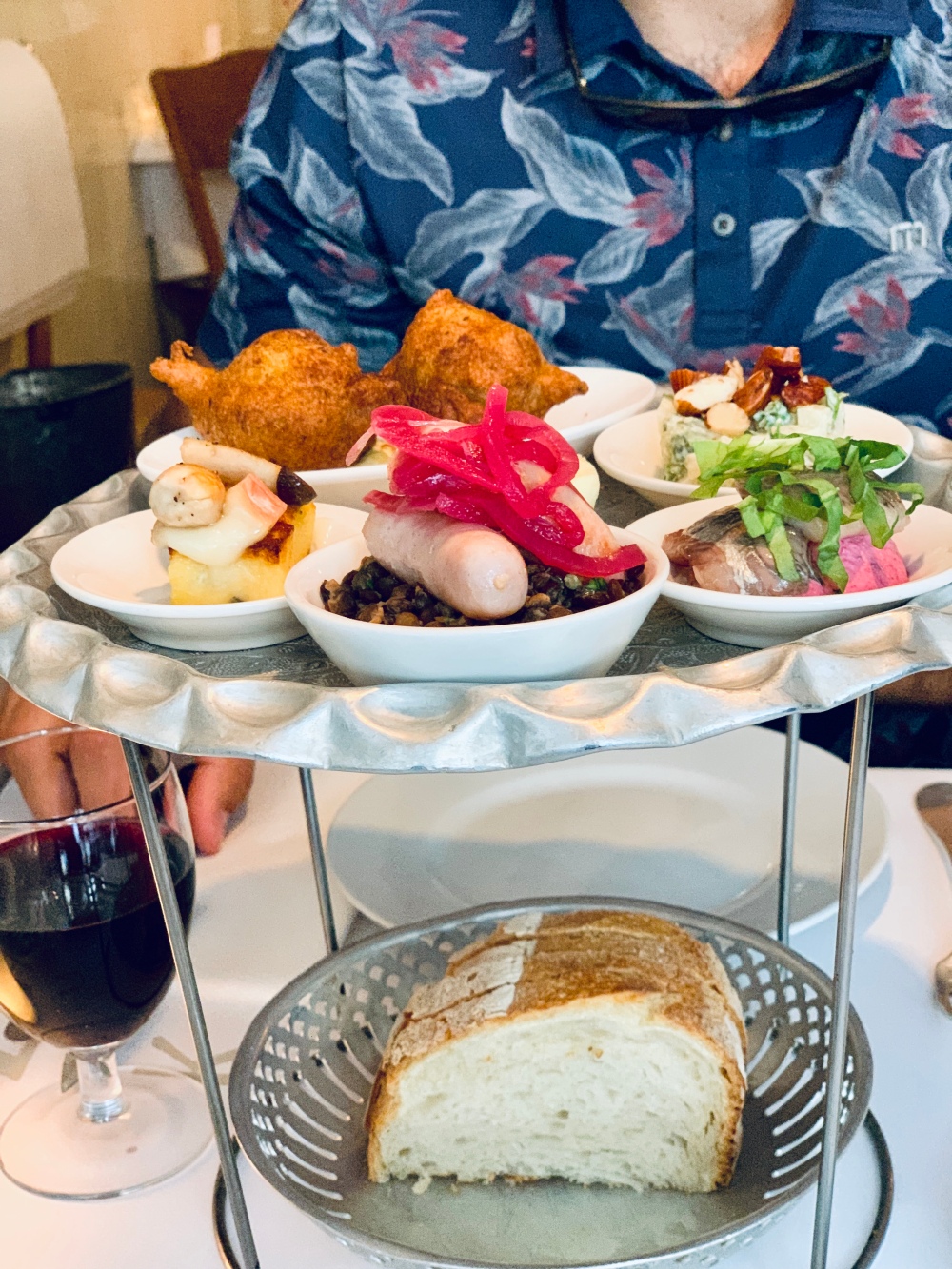 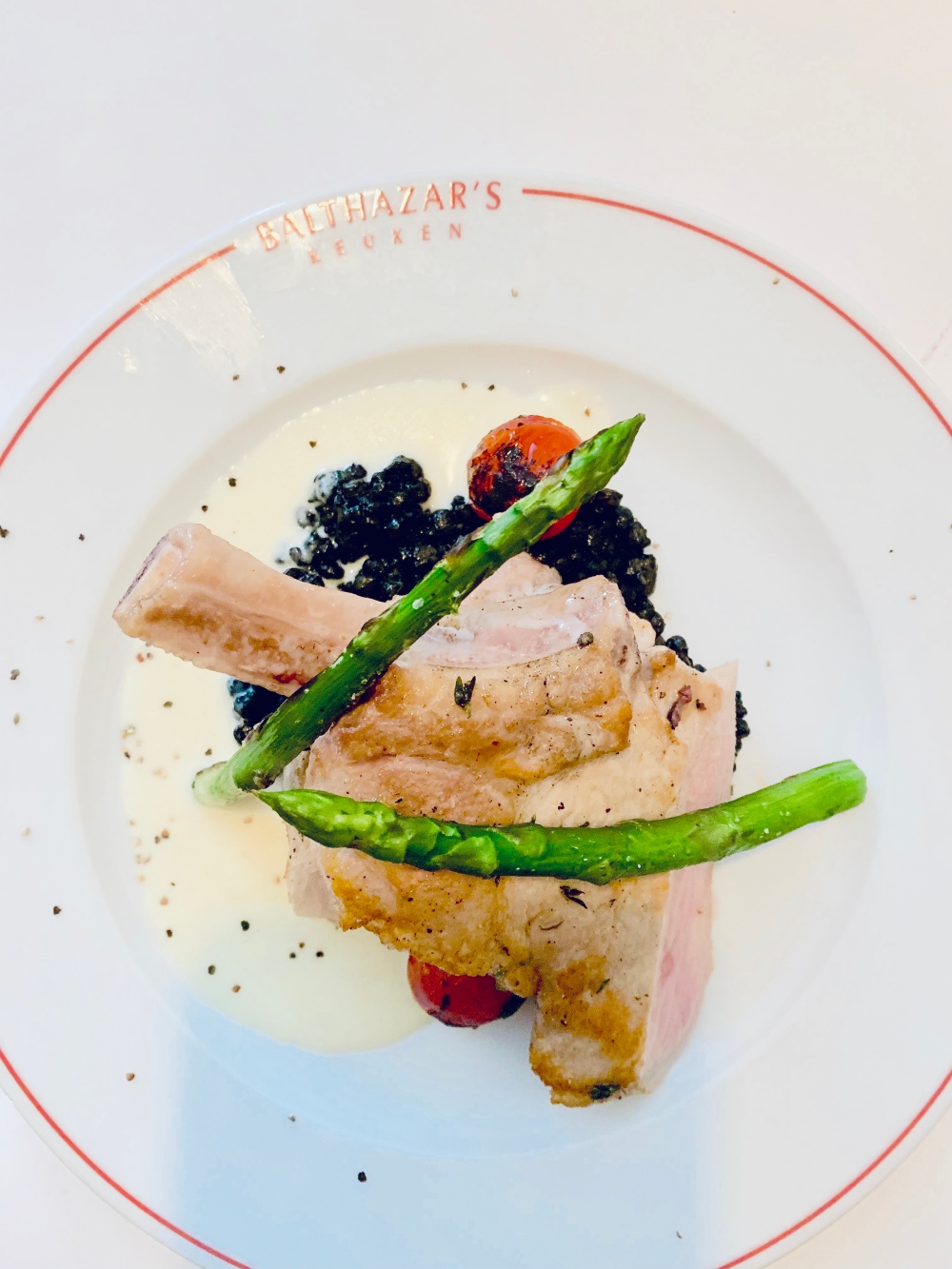 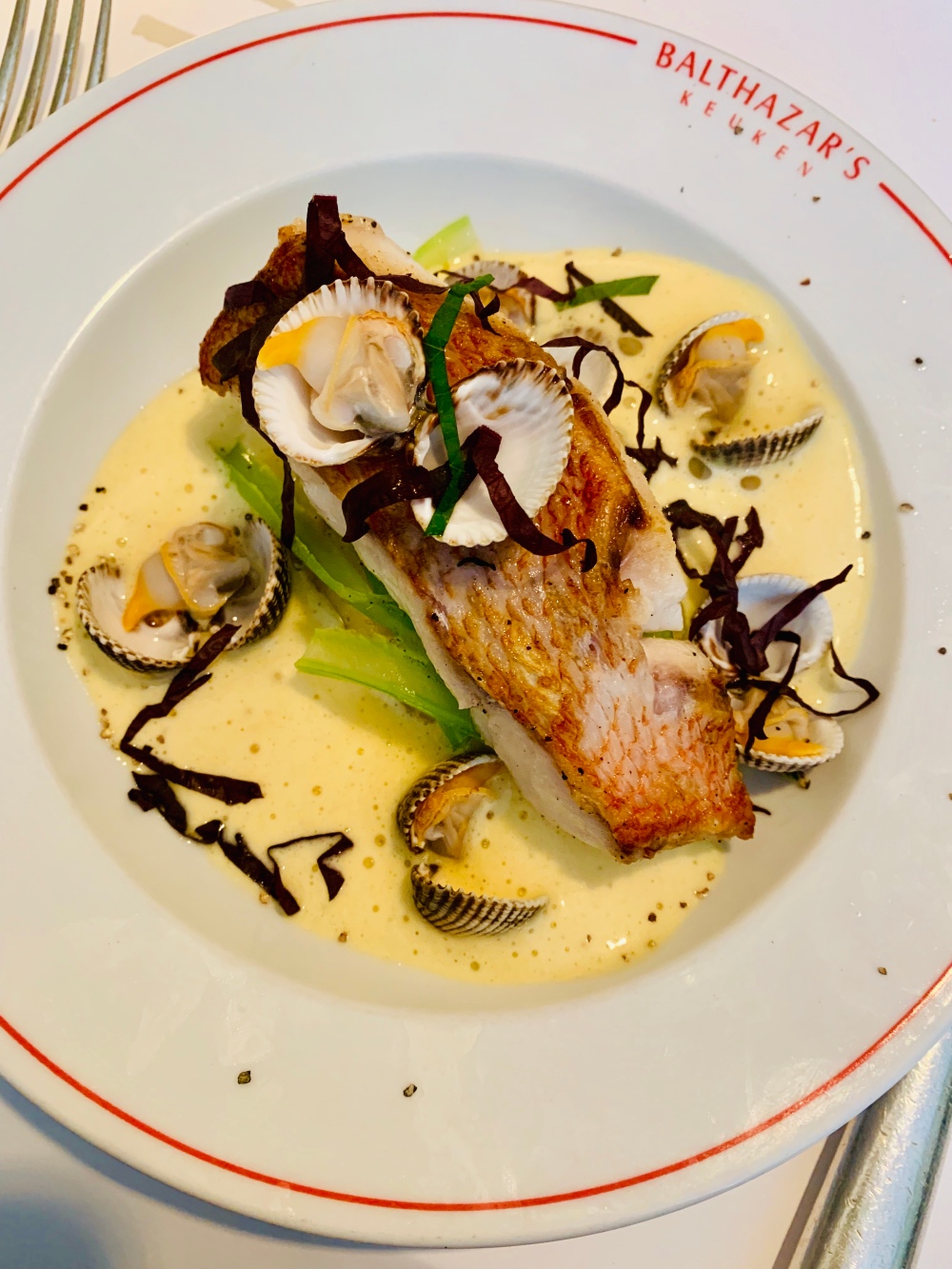 And that was a wrap on Amsterdam! That delicious bakery is closed on Mondays otherwise we would have grabbed another boule to eat on our way to the airport.

Reflecting on all 3 cities, we decided Stockholm had the best shopping, Copenhagen had the best food (no question), and Amsterdam was the most beautiful. Also everyone speaks English in all three cities so if you’re a little travel-shy, these are good places to go and easy to navigate.

We’re already planning our next trip! Probably won’t be able to get away with just bringing backpacks on that one.