Here I go again, on my own. Tonight was another night of cooking for one because I got home after our regular dinner hour (ahem, whenever Kevin announces he’s hungry). I wanted to try a new recipe. That way, if it isn’t good my family doesn’t judge me, and if it is they’re all jealous of my delicious meal when they ate cereal.

I decided to base tonight’s meal on a recipe I found on Cooking Light’s website for chicken fried rice. When I was little I used to say I hated Chinese food. I had never tried it, but my sisters both adored sweet and sour chicken so whenever it was proposed that we order Chinese I would kick and scream and say that I would rather starve to death. I was a treat. I later opened my eyes to the beauty of egg rolls and the handsomeness of General Tso, but I overkilled a little during freshman year. Tonight I decided to rekindle my romance with Chinese inspired cuisine.

I marinated one chicken breast (cut into bite size pieces) in soy sauce and sesame oil. I have no idea how or why we have sesame oil in my pantry that almost always lacks basic foods, but I was happy to unearth it. While the chicken is marinating for a few minutes, cook your rice. I only had white, but the recipe would be great with brown, too. For a single serving cook 1/2 cup, it yields about a cup cooked.

Then I chopped up my veggies. The recipe suggested using a bag of frozen vegetables, but because I had green and red pepper I figured I might as well go with fresh.

After cooking the chicken for a few minutes on each side, remove it from the pan. Then add a little bit of oil or butter (I used butter) and saute the onions. They immediately pick up the marinade residue and turn brown and yummy looking. I also added garlic even though it wasn’t in the recipe because I don’t know how to cook a savory dish without it. I once saw a shirt that said “EAT GARLIC” on the front and “DRINK WINE” on the back. I almost ripped it off the wearer. Once the onions have cooked for a few minutes, add your vegetables. Like I said, I used peppers but you can use whatever you like or have on hand.

Then stir in your rice and create a little well in the middle. Crack an egg into the well and scramble it a little. Let it cook for a minute or so until it’s soft but still runny, then mix it together with your rice and veggies. 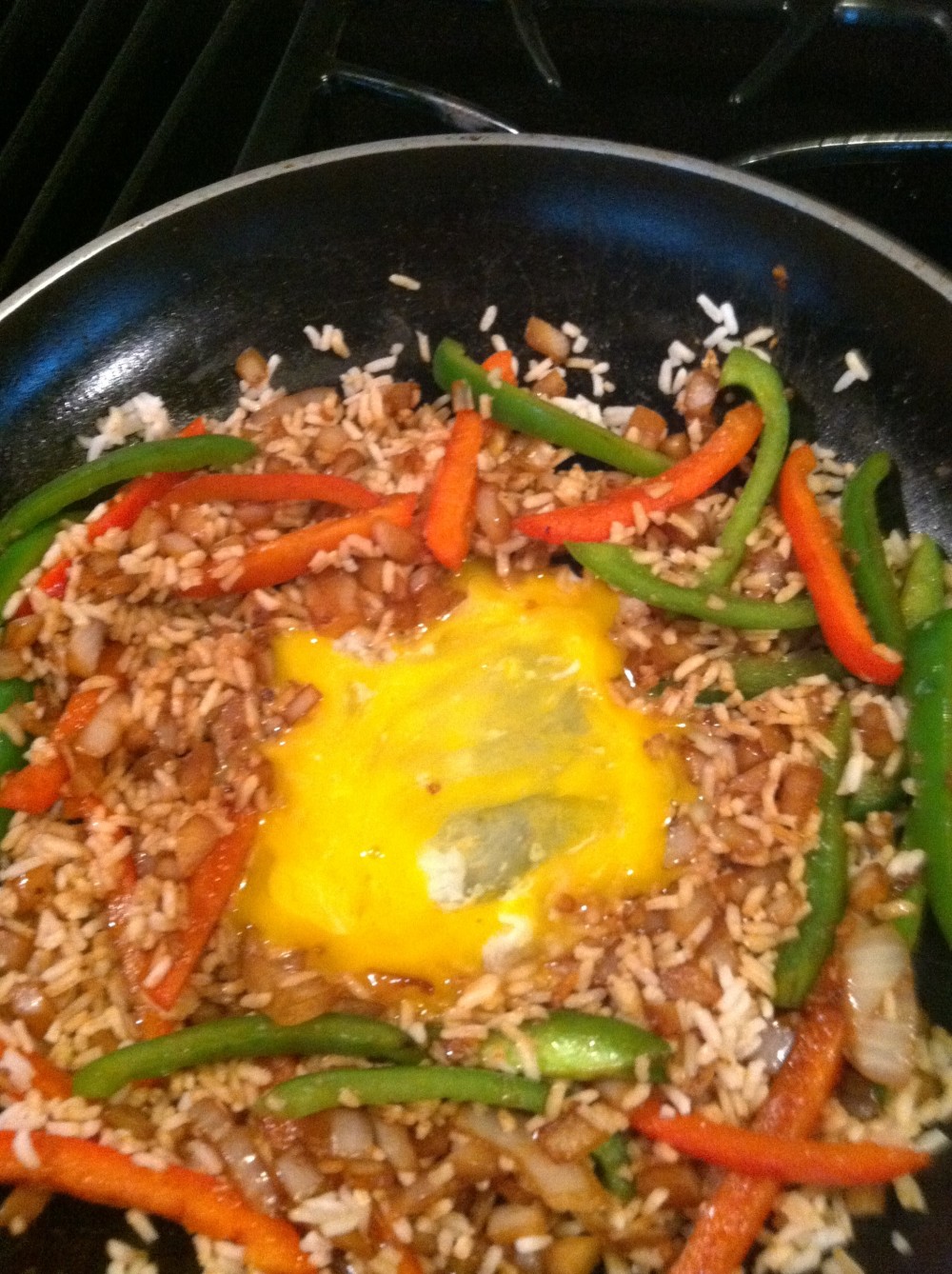 The recipe then said to wait until you see a “golden crust” developing and flip it over to cook the other side. The phrasing made it sound as though I was making a very flippable rice pancake that would emit a little halo and perhaps ring a small bell when it was ready to be turned. This was not the case. Let it cook for 2-3 minutes and then stir it around and let it cook another couple minutes. Basically you just want to be sure the egg is cooked.

Then add your chicken back in and stir it together! This is also when I added salt and pepper, and then red pepper flakes on a whim. I was feeling spicy. Pretty good looking Chinese food made by an Irish girl, if I do say so myself.

Okay let’s be honest I didn’t eat it with chopsticks. They were for photography purposes only. I look like Edward Scissorhands when I try to use chopsticks.

This is more like it. Fork, Camelbak (obsession), and a Jodi Picoult novel. Dinner for one, I love you.

And then dessert. To update, the “chocolate chip cookie pie” I was making last night was a bit of a debacle. I made the cookie dough but then thought it was smart to attempt to cook said dough in a 9×9 pan. 45 minutes later it was 3 inches tall but completely uncooked. I was cranky and impatient so I dumped it onto a cookie sheet, spread it out with a spatula, and stuck it back in the oven for another 8 minutes or so. It had jagged edges and wasn’t exactly pretty, but it still tasted phenomenal. Especially over ice cream, like this. (Tonight I reheated my cookie cake/pie/bark/mess in the microwave for 20 seconds). And made a mini one for Kevin.

veggies of your choice, chopped

This was a BIG portion. I didn’t finish all of it, but that was mainly because I knew I would be inhaling a cookie monster within the five minutes following and wanted to prevent vomiting.