Happy day after Halloween! Last year the GS and I got SO excited to hand out candy to trick-or-treaters and then we had zero. To the point where we sat on our front stoop with beers and the candy bowl and basically forced candy onto children walking by.

So this year when we got invited to go pass out candy in the ‘burbs with Alice we decided to go for it. And I threw together a last minute costume in literally 2 minutes so that Alice wouldn’t be the only one dressed up.

(On my back was the Magic 8 Ball verdict: “Cannot predict outcome.” On Alice’s back was her scuba oxygen tank.)

Now that it’s officially starting to feel like fall/winter, I’m in full blown soup/stew mode. So this is one of the least photogenic things I’ve made in a while but it includes a new INNOVATION. A little brain child of mine that I just might incorporate into all the soups moving forward. And it has to do with onions.

I found lamb “stew meat” on sale at the grocery store and, feeling otherwise uninspired, snagged it. Stew meat typically means it’s the crappiest cuts and/or that it just needs to be cooked for a very long time to make it edible. No problem- that’s what the dutch oven is for.

Season both sides of the meat with salt and pepper and searin a little olive oil. Remove the meat, add some butter to the pot (recommended, not required) and add two thinly sliced onions on low heat. If you haven’t caught up on The Chef Show on Netflix, I highly recommend viewing Roy Choi’s tutorial on caramelized onions. They take a long time- that brown color is coming from a slow release of sugar, not from the heat from the pan like a sautéed onion, but it’s worth it. So I did two onions that way and then removed them from the pan and set them aside. 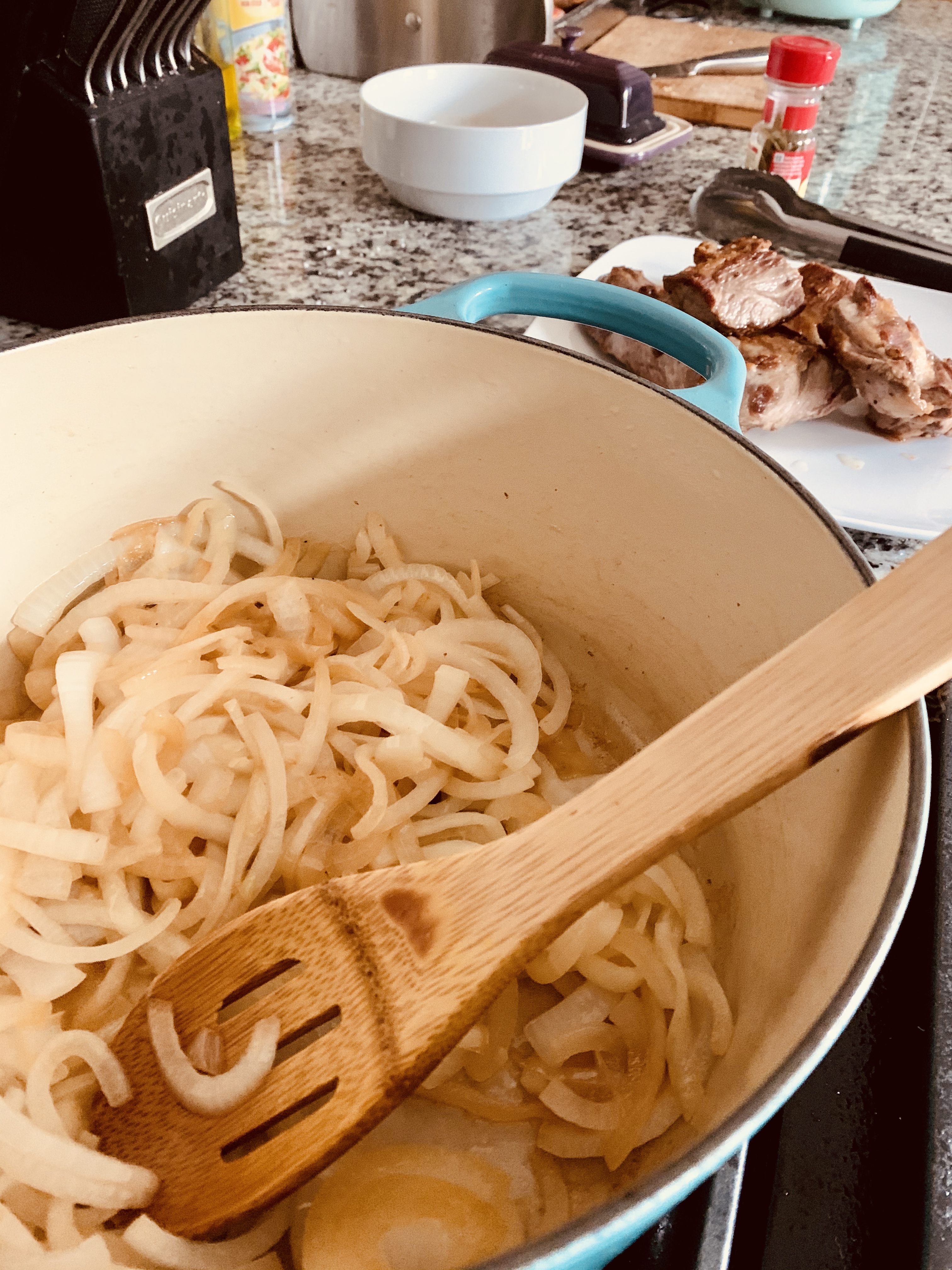 Add in the regular mirepoix: onion (just one this time, diced), celery, and carrots. Plus garlic and two bay leaves. I also threw in a chopped sweet potato because I had it kicking around, AND a Parmesan rind. These are gold. Literally, but also figuratively.

Cook down until a little soft, and then add the meat back in and a quart of beef stock. Cook on low heat, stirring occasionally, until the liquid reduces considerably and you’re left with a thicker stew. Then a few minutes before serving, pull the meat out to remove the bones and shred it a bit, and add it back in with the caramelized onions. Discard the Parm rind and the bay leaves. 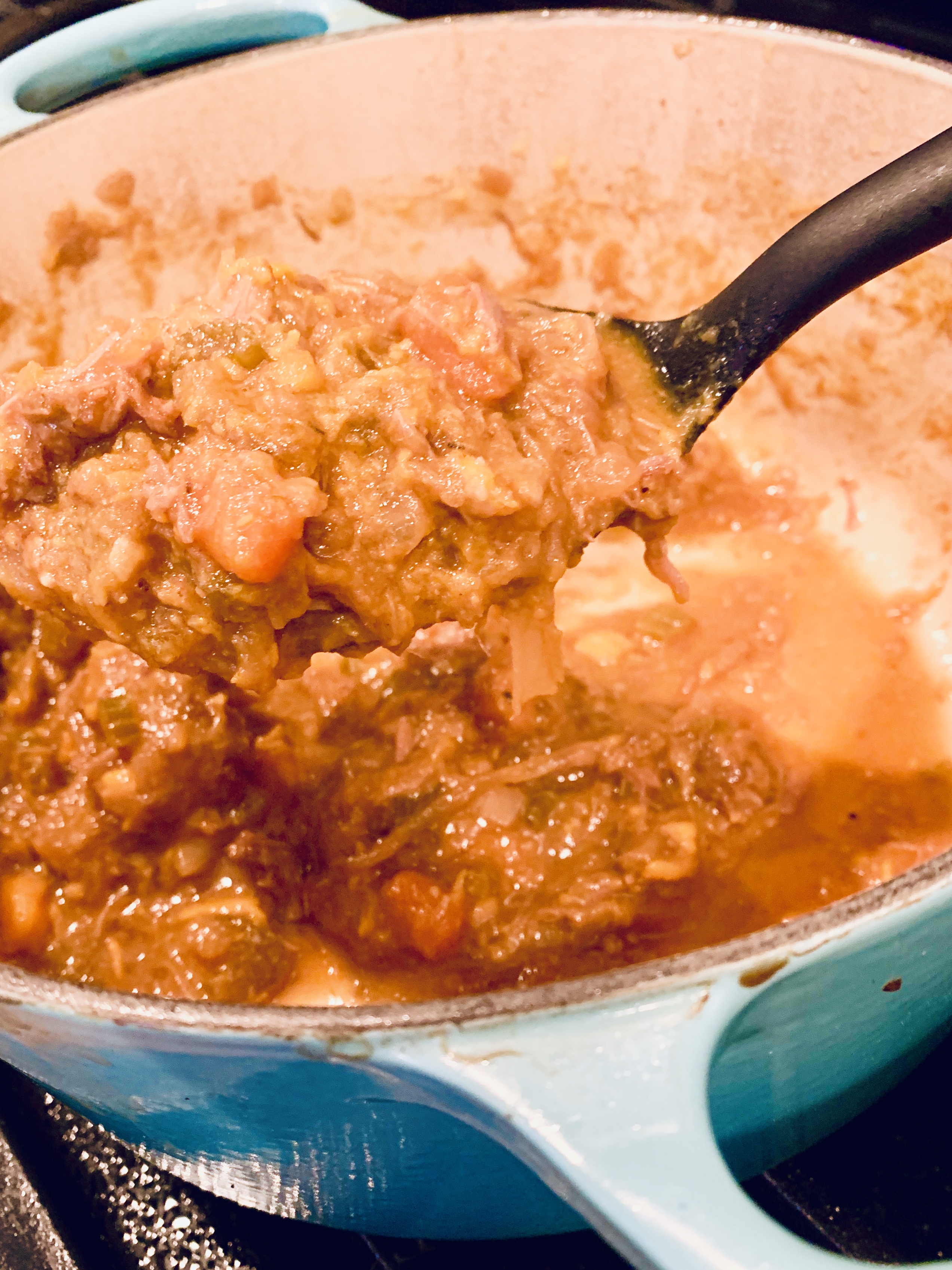 I served this over couscous but it would also be great over mashed potatoes like this one, or just straight up with some good crusty bread.

The GS said it tasted like a French onion soup hybrid: all the onion-y deliciousness, the cheese flavor (from that rind!!) but meatier. It reminded me of eating the French onion soup at Bateau in Seattle. Still one of our most memorable meals and that soup tasted like MEAT. You definitely could do this with beef- doesn’t have to be lamb, and you could use boneless stew meat to make it a little easier, too.

But don’t skimp on the onions.