Last week we packed up and drove to RI to celebrate Sydney and Mike’s wedding!

They got married on Thursday (their 9 year anniversary) which might seem unconventional but was actually the greatest thing ever because the celebrations continued after the high of the wedding and we got to spend a lot of time with their family and friends.

And yes… Louise was a flower girl.

She and her cousin Penny exceeded everyone’s expectations and acted like true professionals. Louise loves the water so my main concern was that she would bolt straight for the ocean but she stayed on the path and sat patiently during the very brief and adorable ceremony on the beach. I guess I overestimated her desire for exercise.

Then we walked up to their aunt and uncle’s house for a backyard reception in a gorgeous tent. They had the perfect day and everything came together so beautifully.

I’ve mentioned before that Sydney is vegan so they had a mix of vegan food (bruschetta, Mediterranean station, vegan cupcakes) and non-vegan. My favorite was the little mugs of chowder with a clam cake on top.

And in her honor I created an (almost) vegan recipe for today! I ended up adding Parmesan cheese and topped it with scallops to appease my carnivorous baby daddy, but it is easily kept vegan. And I’ll do it that way when I inevitably make it again for the happy couple once they return from their Newport mini-moon.

zest of one lemon

The genius of this recipe is making your own corn stock for the farrotto (risotto, made with farro). It’s super easy and has a shocking amount of flavor.

We start by husking three ears of corn. Cut the corn off the cobs and set it aside. Holding the cobs over a medium saucepan, scrape them with a wooden spoon to release any juices or get off any lingering kernels. Place them in the pan with 8 cups of water, two whole garlic cloves, and a teaspoon of salt. Bring to a simmer for at least 15-20 minutes.

This part can be done ahead of time if needed, and when you’re ready to make the dish you just re-heat the corn stock.

In another saucepan, heat 2-3 tablespoons of olive oil. Add the leek, thinly sliced and well-rinsed to remove any grit. Season with salt and pepper and sautée for 5-7 minutes until soft. Add the farro (also rinsed) and stir. Add the white wine and let that cook for 2-3 minutes until the liquid is mostly gone. 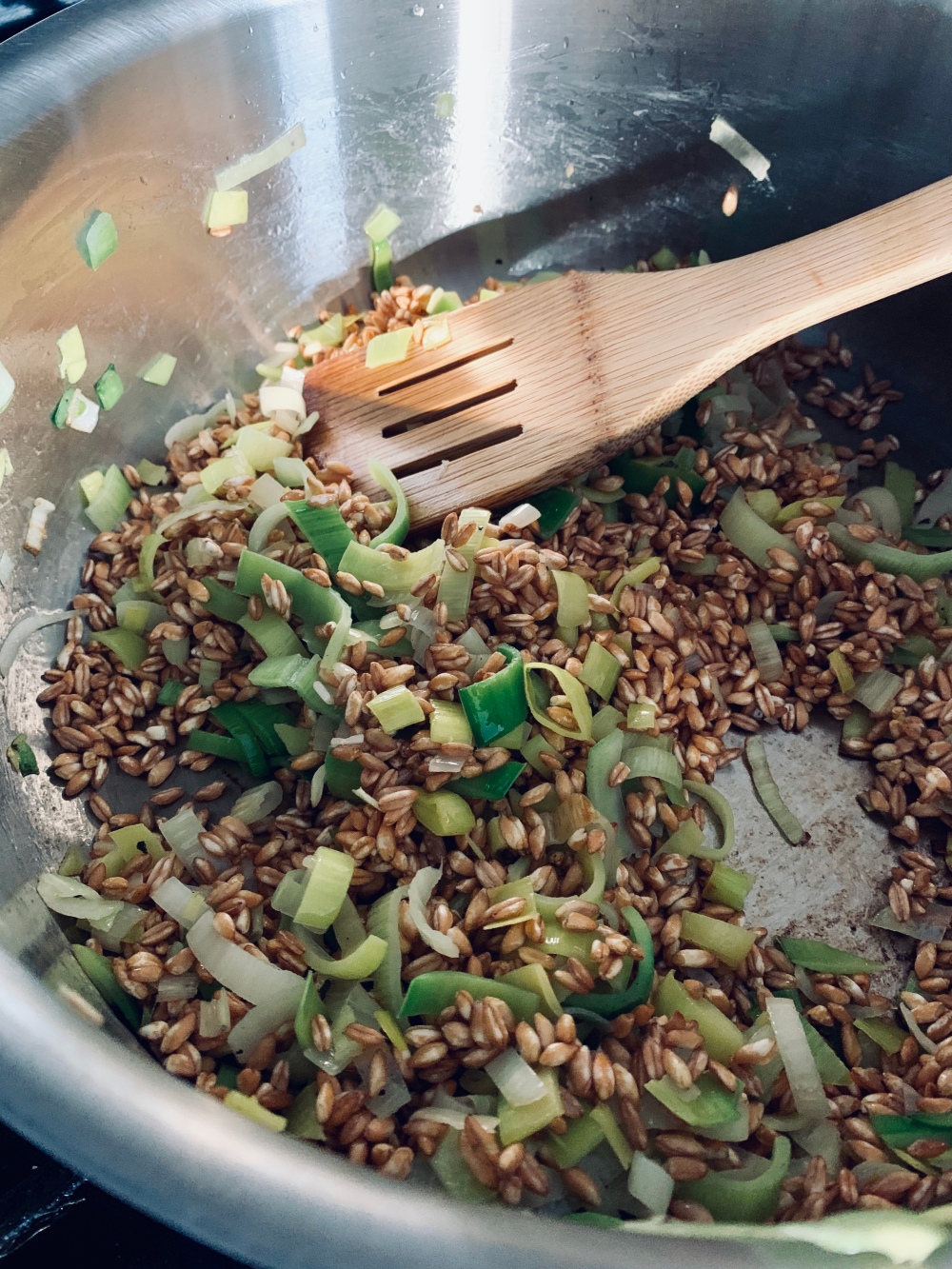 Using a ladle, start to add the corn stock in about 1 cup increments, stirring and letting the liquid absorb into the farro before adding more. After about 15 minutes when you’ve used the majority of the stock, add the corn and the tomatoes.

I didn’t use all of the stock- probably about 6 cups. But hang on to what is left over (you can discard the cobs and the garlic and just keep the liquid) because you can use it to re-heat any leftovers!

At this point if you’re still keeping it vegan, add the lemon zest and the basil and serve. I added Parmesan cheese to make it a little creamier. You could also use nutritional yeast! Aaaaand I also seared some scallops in brown butter for the top.

Sprinkle with a little flaky salt and some more basil, and serve! 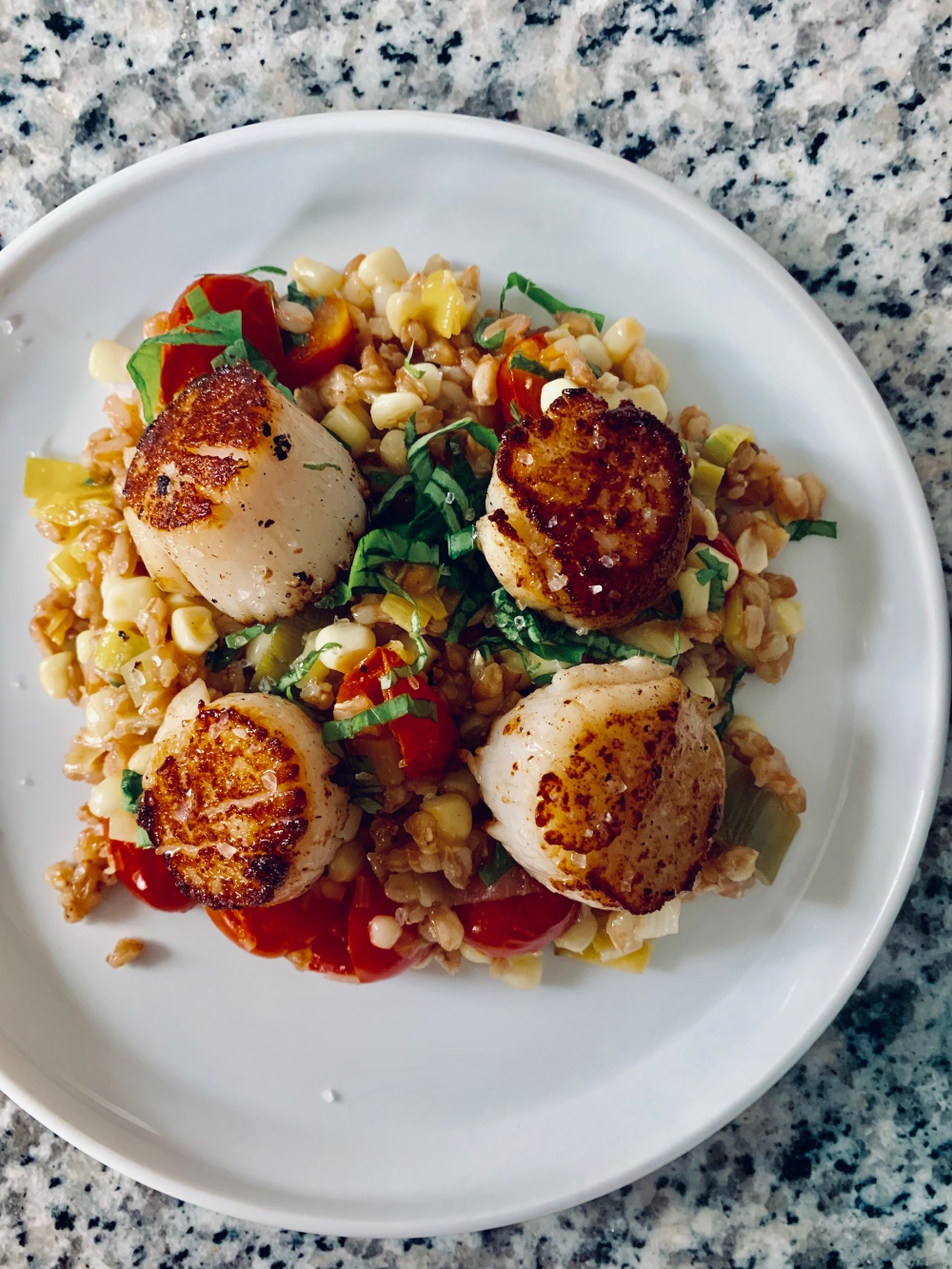 Literally summer on a plate. The GS deemed it restaurant quality. I’d like to make this up in NY because the corn really is so much better up there than it is in Maryland. 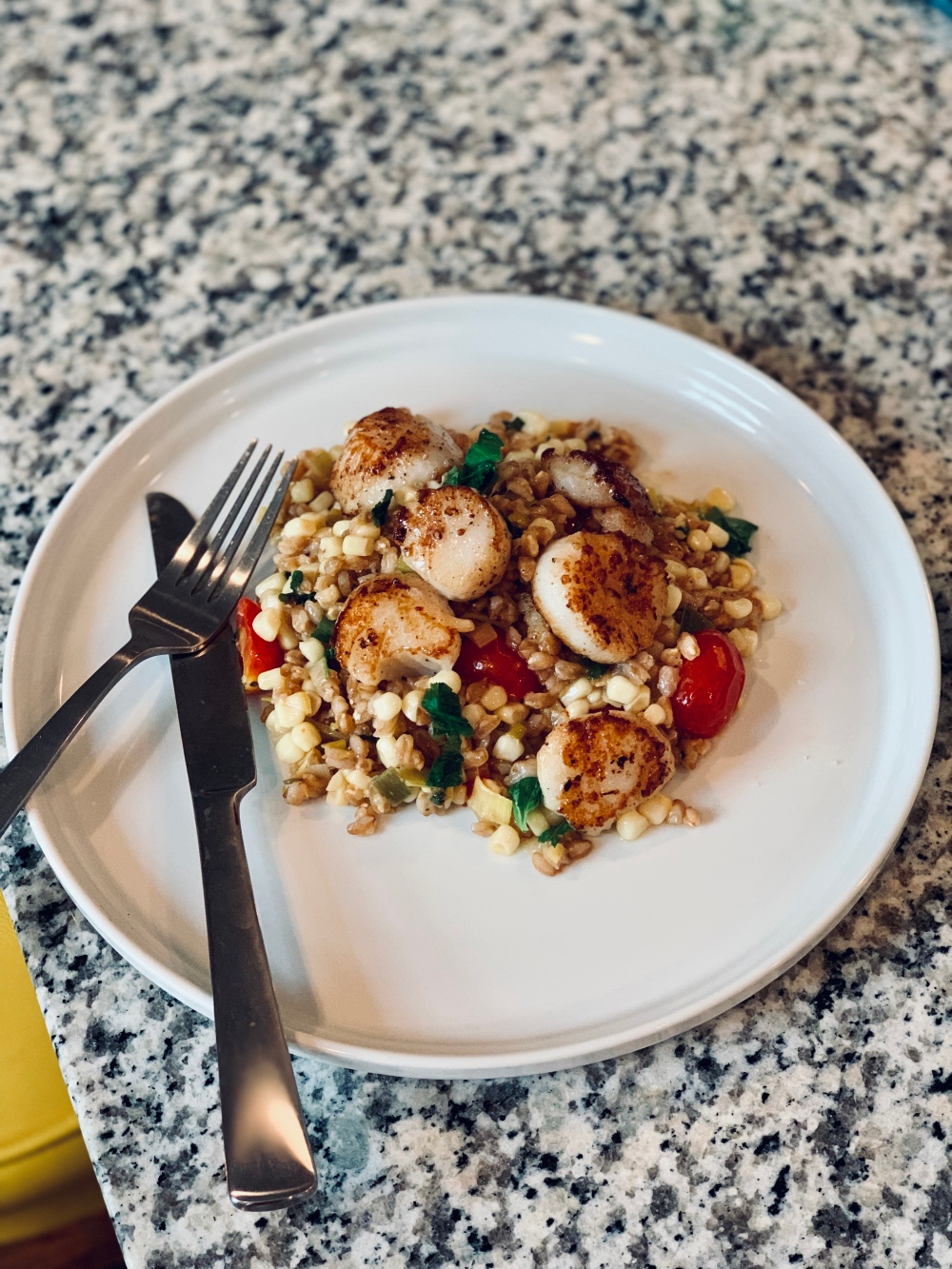 But that’s my only complaint about this rat and rodent infested city that I, as a human being, choose to live in. Thank you very much.