Hey hey! I figured I would do a recap post about the wedding just for fun. I posted some pictures on Facebook but this post includes some NEVER BEFORE SEEN photos!

Does that entice you?

First I’ll say that we hired What Em Sees photography, kind of through sheer luck. She’s a friend of Ethan’s former co-worker, and as soon as I saw the photos from a wedding she did I was like YEP, CHECK. She and her co-photographer, Emma, were so awesome and fun to work with. So I give them all the credit for this post, and now you’ll probably never want to read this blog with my shitty iPhone food photos ever again.

I guess I should do this somewhat chronologically so we’ll start with invitations.

We met with a graphic designer who made beautiful, Baltimore themed wedding invitations. But they were SO SO expensive. And I felt like if people walked away from our wedding saying “How about those invitations, though?!” we would have done something wrong. So I ended up ordering ours through Minted. The site always has a promo code AND the envelopes come pre-addressed which is a huge time saver. And we liked how they turned out! 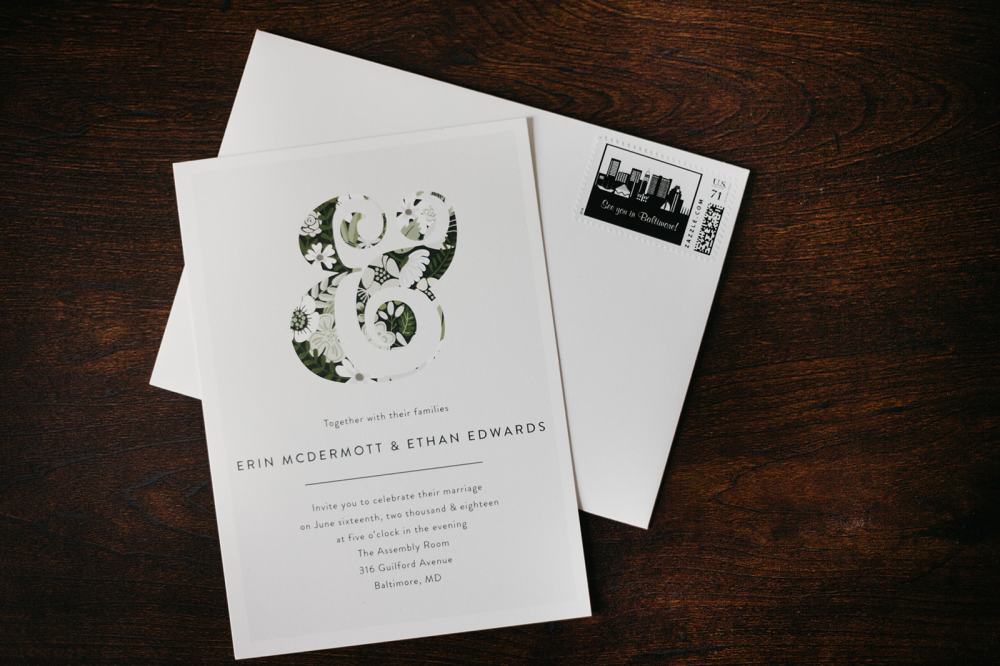 That is technically an ampersand but my mom and I thought it looked like an “E” and the GS said “I don’t know” and my dad said “what is that?” and either way it worked with our sort of neutral/greenery theme. I also agonized over those stamps (they say “See you in Baltimore!”, and are from Zazzle.) Keep in mind I was making all of these decisions when I was confined to my couch with a broken leg and WAY too much time to think about it. But it all worked out!

(We also ordered our thank you notes from Minted, which I highly recommend again because of the envelopes being pre-addressed. It’s a LOT of time and writing so being able to skip the addressing step made it go a lot smoother.)

I bought my dress at Garnish in Baltimore the day before Thanksgiving. I can’t say enough good things about this place. They were so lovely to work with and weren’t sales-y at all. The GS got his suit from Black Lapel, which is an online made-to-measure suit company. He didn’t love love the suit but it looked nice and was very convenient, assuming you can do the measurements correctly.

The wedding wasn’t until 5 so we had a pretty relaxed day. I got up and went to Body Attack like I always do on Saturday mornings, and then came home and made breakfast for the people at my house. My friend Toni-Ann came over to do our hair (with her adorable daughter, Josie) and we all did our own makeup.

I was initially against the idea of “getting ready photos” and told the photographer that I had no intention of bouncing on my bed with my sisters in matching bathrobes. But I’m glad she got some of these pictures, particularly with my dad because OMG LOOK AT HIM.

Then we went up to the Washington Monument in Mt. Vernon for our “first look” pictures. Another thing I was originally against but ultimately we decided to do, not because we particularly wanted to capture this moment forever and ever but because we didn’t want to miss a single minute of cocktail hour. #priorities

We opted against a traditional “wedding party” but obviously my sisters and sister-in-law were there with me and just got to wear whatever dresses they wanted. Babes!

I gifted them monogrammed Yeti rambler colsters and these cuff bracelets from Brook and York. I’m so glad I got both for myself, too, because I use the Yeti constantly and wear the bracelet every day. It has the coordinates of camp engraved into it!

Some family pictures came out better than others. 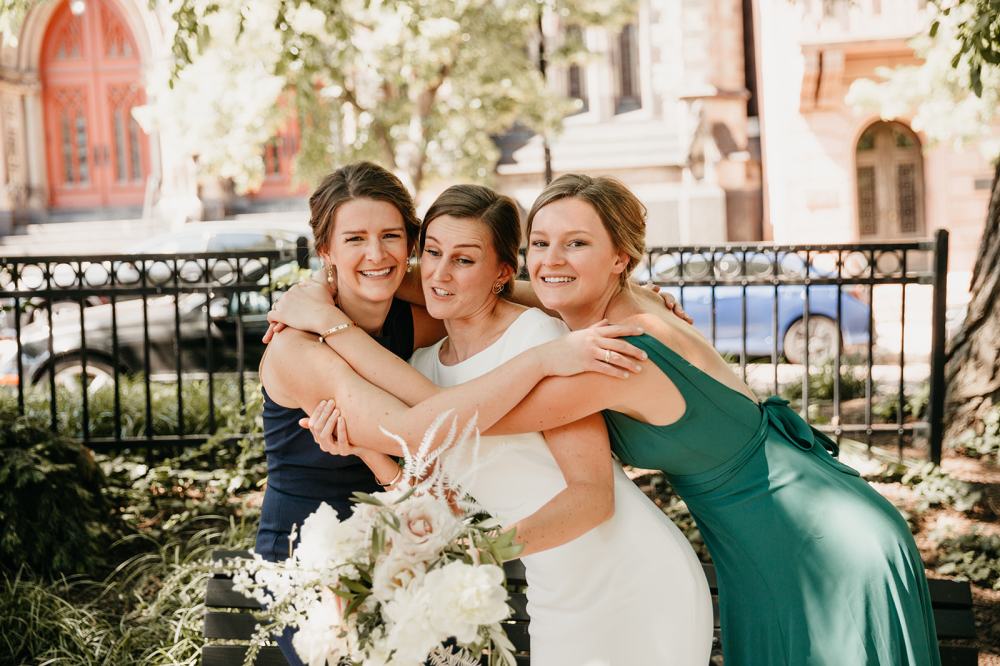 Then our families headed to the venue while we took some more shots around the city. I think these came out nice for the most part but we were pretty terrible at getting our pictures taken. At one point the photographer told me to smile without showing my teeth and the GS was like “Oh she actually can’t do that.”

We were married at The Assembly Room, which used to be an 18+ club called Bourbon Street that I may or may not have lost a digital camera at sometime in 2009. We really wanted a space that was large enough to hold both the ceremony and the reception, because Ethan’s grandmother was going to be marrying us. We also wanted something with an industrial vibe. This checked all of our boxes and we kind of found it at just the right time. When we first looked at it in October it was still in the pre-renovation stage (aka disgusting. we had to “trust the vision”) and we ended up being one of their first weddings.

We set up this “altar” using mostly things that my mom either made or found because she’s a creative genius. If you’re looking for the link to her website here to book her for your event, she doesn’t have one. GET A WEBSITE, MOM. 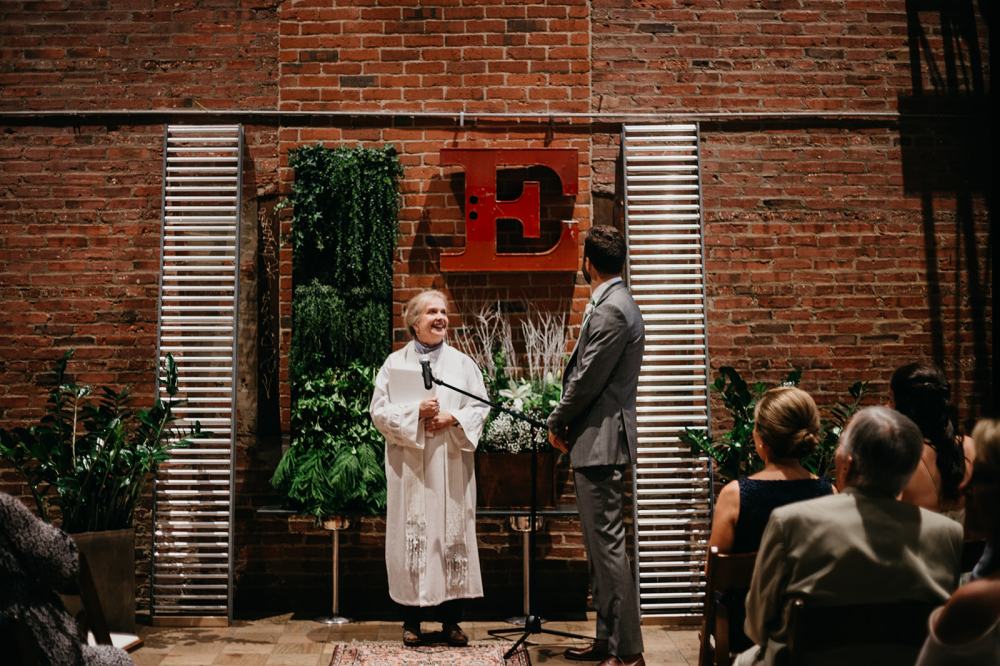 How cute is Nana? She did such a beautiful job and I love how personal our ceremony was. We were able to have some people seated downstairs and some people watching the ceremony from up above which was pretty cool. Oh and people were drinking beer during it! One of our other main priorities.

Then we went straight into cocktail hour! The caterer asked us if we wanted her to pull us aside to have 5 minutes of alone time after the ceremony and we were like “…pass.” We have the rest of our lives to hang out but only an hour-ish to chow on these hors d’oeuvres.

We had four passed apps (Laotian chicken spring rolls, beef tartare, crab cake on Melba toast, and vegan buffalo cauliflower) and a HUGE charcuterie display. We had Copper Kitchen cater our wedding and we were really happy with the food and the service.

They also let us provide our own alcohol which was a huge savings and allowed us to have fun beers from Maryland, New York, and Rhode Island. We designed these beer menus (Vistaprint) and cocktail napkins (Zazzle). We also did a larger beer menu through Vistaprint, and had done our save the dates on there, too. Definitely the cheapest printing option if you’re willing to create your own content, especially if you use Ebates and promo codes. 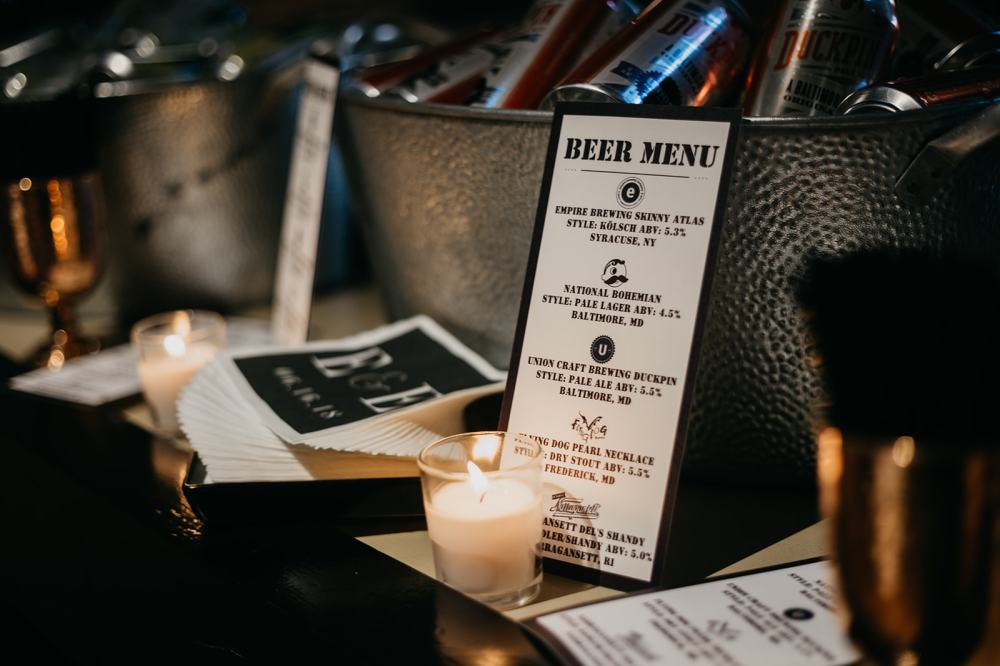 We also DIY-ed the escort cards. I bought clear labels and printed everyone’s names on them (you can do the design part for free through Avery) and then just put them on folded cards. We used four of the conveyor belt/ladder things (also a warehouse find of my mom’s, and the other two were at the altar) to display them. 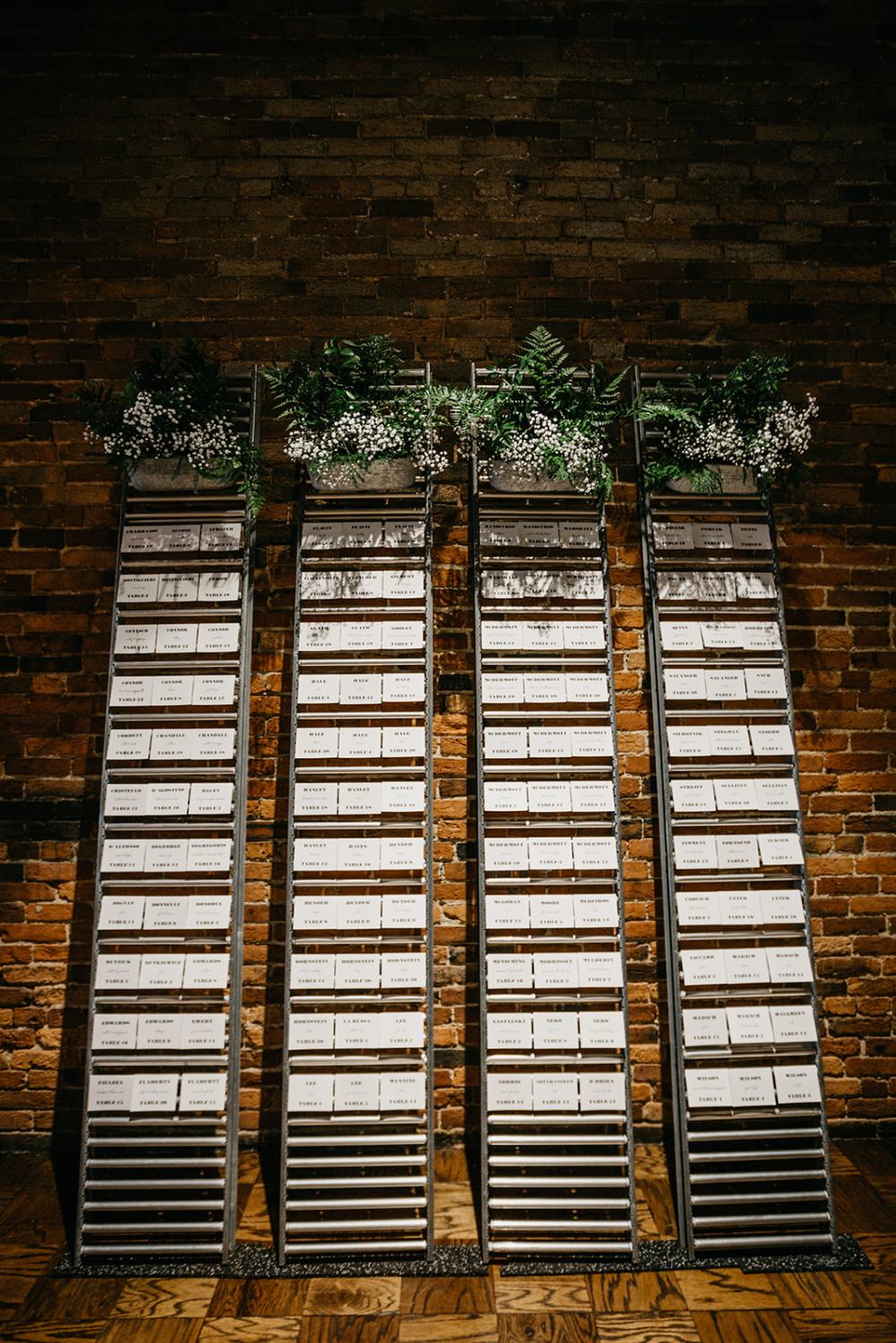 I had my bouquet, the corsages and the boutonnieres done through Lucky Penny Floral. I really wanted to use someone local and I love their whole concept of working within a color scheme with what is local and in season. Mine was Colorway #1 with a little blush added in!

The rest of the flowers we did ourselves! My mom ordered a bunch of assorted greenery and white lilies from Costco (who knew?!) and we assembled all the centerpieces and accent flowers at my house the day before.

My mom found those galvanized metal buckets at the farmers market in Syracuse, and then had the vinyl decal numbers made so the centerpieces could double as table numbers. Vinyl decals are also a pretty easy DIY application and can be ordered in every font and color on Etsy. 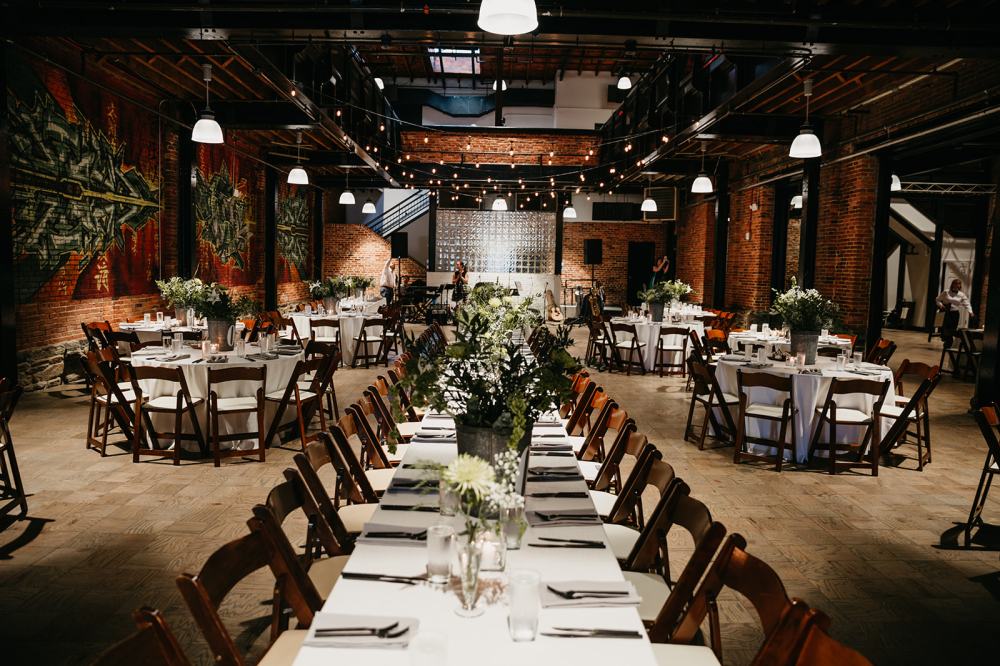 We wanted non-traditional “wedding food” and therefore opted for stations. Everyone started with a plated salad which, admittedly, was mostly cheese. I’m all about the burrata. Then there was a Korean barbecue station with short rib, chicken and tofu, and a Maryland station with rockfish and chicken Chesapeake. 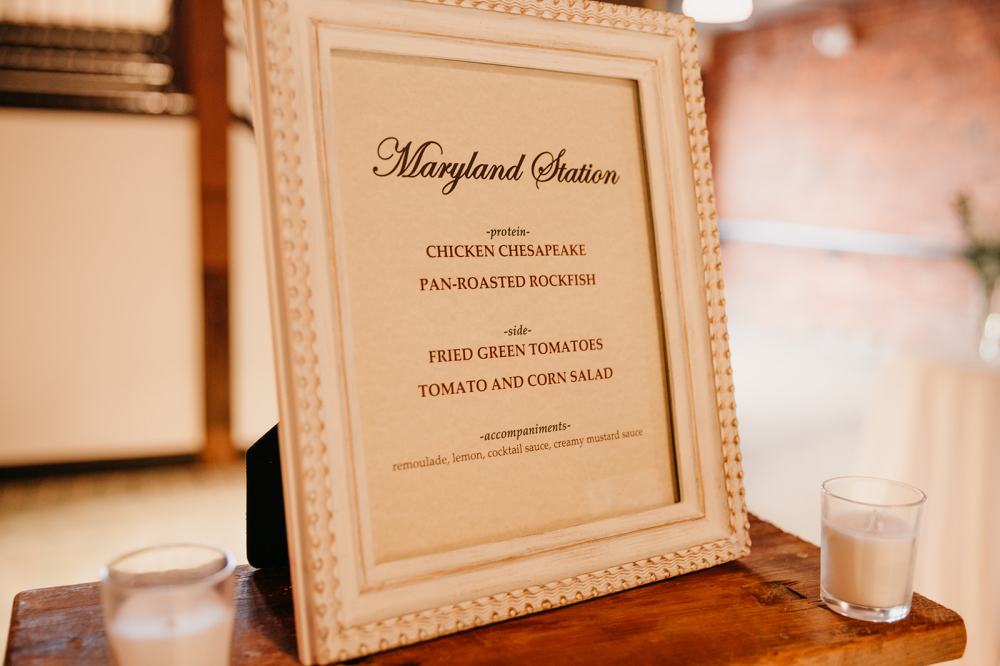 I did not take a picture of my assembled short rib bao buns or chicken lettuce wraps because I didn’t bring my phone anywhere near me but I assure you they were wonderful. And I was just so happy to be eating Korean barbecue on our wedding day.

We hired the Bachelor Boys Band (sorry I hate their name, too) and they were fantastic. Aside from the venue I think that’s what most of our guests have been commenting on, and people were on the dance floor all night. 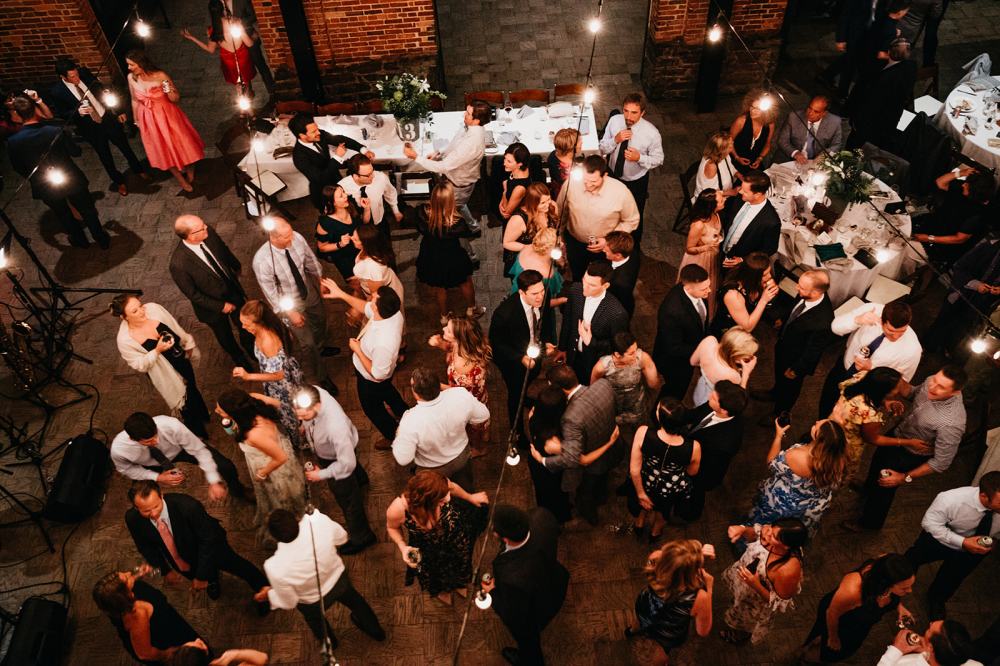 For dessert we opted against a cake. I feel like wedding cake is usually not good and/or not eaten. I also loathe this new trend of buying a beautifully decorated cake that is actually CARDBOARD underneath and serving people sheet cake. I’m too much of a dessert purist for that. So we went with cookies. 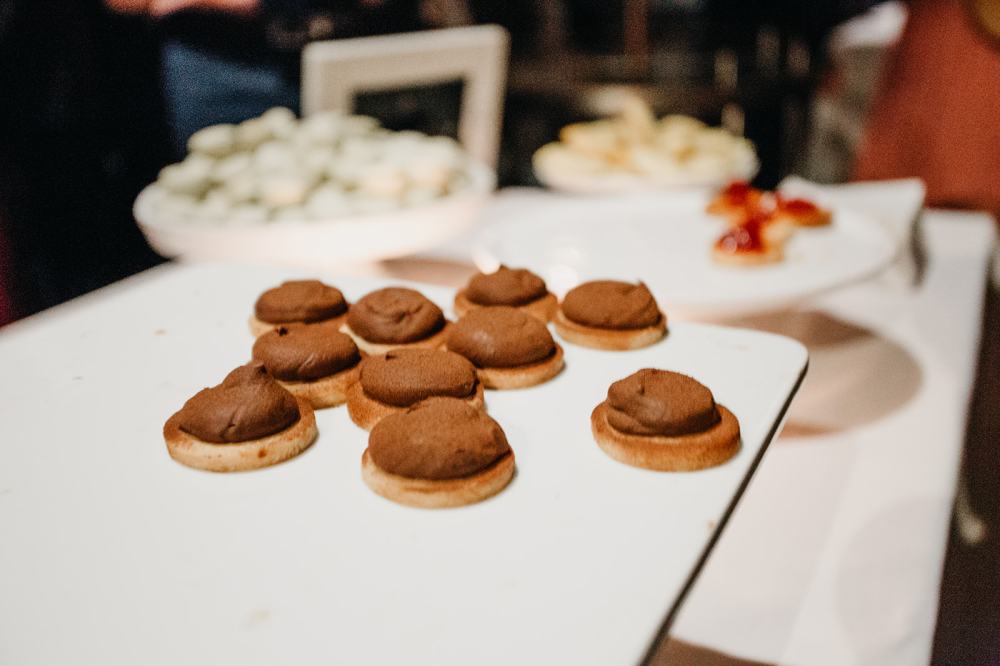 We had a variety but my favorite were these mini Berger cookies (a Baltimore thing). We also had pistachio macaroons, some kind of fruit crumble cookie, and Madeleines.

Then we had late night food- doughnut burgers and french fries. Ideal drunk food. I’m not even a big doughnut person but these burgers were one of my favorite things we had.

Everyone kept telling me that the whole day would be a blur and that I would barely remember it, but I really don’t feel that way. I think because of the way we structured the day, without any big breaks in between festivities, I was able to spend time with people and just really enjoyed the whole thing.

As I said to the GS, “If shit went wrong at the wedding I didn’t hear about it, so I don’t care.”

Oh and I would be remiss if I didn’t  feature my sidekick at the wedding, now famous to all of our guests for slaying the dance floor all night long, BIRDIE.

We’re so happy that so many people came to the wedding and enjoyed their time in our adopted home of Baltimore. We had the best day! After attending 20 weddings together it was really fun to have it be our day and we loved every minute of it.