The Thursday before our wedding we decided to host a barbecue because we knew our families would be coming into town early and might like to see our house.

As it turns out, many many people were coming into town early and we thought it would be fun to host EVERYONE. We got some crabs, lots and lots of beer, and stuff to grill. It was a great time and a really nice way to kick off our wedding weekend.

One of our best friends from Loyola lives up in Rochester and brought us a variety of Rohrbach beers, one of which is called “Griddle Cakes.” It actually tastes like breakfast.

As soon as I had it I decided I wanted to put it in waffle batter. I bragged about my novel idea and how the carbonation in the beer would make the waffles so light and fluffy.

Turns out this is not such a novel idea and there are recipes for beer waffles everywhere. Instead of being disappointed that this wasn’t going to make me the next Food Network Star, I picked the one that seemed the most complicated and set out to make it at 7AM last Saturday morning.

I recommend starting by separating the eggs, because the egg whites take a while to fluff up. So toss 3 egg whites and 2 tablespoons of sugar into your stand mixer and start whipping. If you’re doing this with a hand mixer, it probably doesn’t matter when you do it. Or phone a friend to stand there and wait for stiff peaks!

While the whites are whipping, mix all the dry ingredients.

Then in a separate bowl, we want the 5 oz beer, 12 oz milk, 8 tbs melted butter, 2 tsp vanilla, and 3 egg yolks. Ideally your beer and milk won’t be ice cold from the fridge, because that starts to do odd things to melted butter. Pour the wet ingredients into the dry and fold together. Then carefully fold in the egg whites once they are nice and peaky. 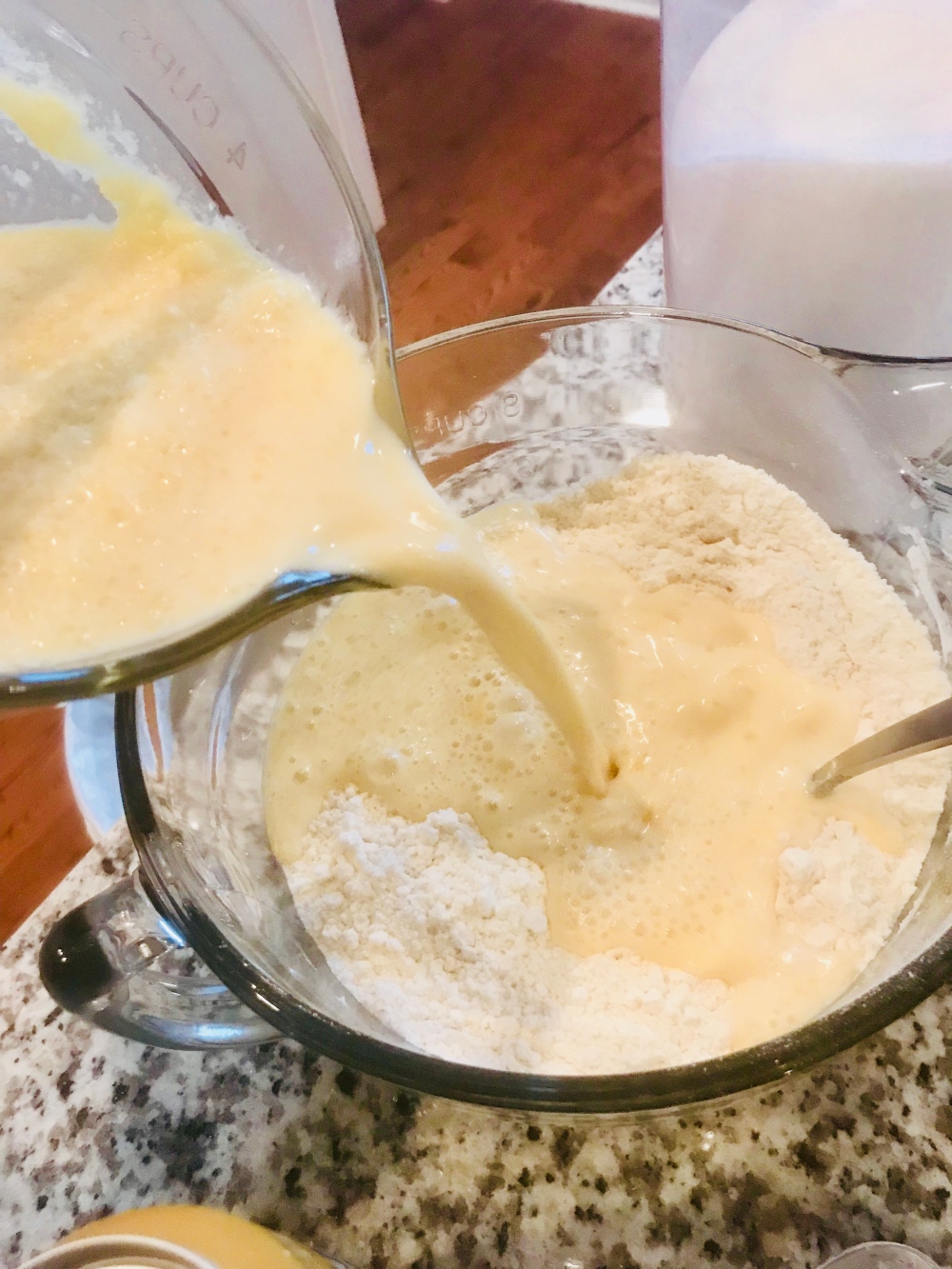 Add the batter to your waffle iron! These are inexpensive and don’t take up a lot of space. They are messy, though, if you’re like me and can’t nail down how much batter to pour in there. So I recommend putting it on a plate or cutting board. I love these flimsy plastic cutting mats so much. I got them in a 4 pack and use them every day.

I am such a creature of habit and I eat a piece of toast with two eggs for breakfast every.single.morning.

But I broke my streak for one of these.

The GS continued to have one every day (fun fact: the batter is reportedly still making good waffles 4 days later). We’ve now stepped up the game to add crumbled bacon to the top for that sweet and salty combo. And then on the final day he also requested chocolate chips be added. So spoiled.

And you’re going to have some beer left over so you may as well enjoy it with your waffle. It’s the weekend, after all.