My mom is shaking her head SO hard right now. Don’t worry, Mom, I haven’t forgotten the many many hours I spent staining in my childhood. When I was in elementary school we put an addition and a deck on our house, and then in middle school we were put to work staining all the trim, doors, staircases, etc. at camp.

Elbow grease is a big thing in our family. We don’t hire people to do things we can do ourselves.

Anyway, it took us about 9 gallons of stain, more hours than I want to count, and about 5 trips to Home Depot. One of which involved the GS returning a stain we decided we didn’t like that literally said “non-returnable” on it.

This combination of sheer luck and humble charm occasionally wants me to punch him in the face, but in this instance it benefitted me and saved us about $36 dollars so I’ll take it. Lord knows I have none of that skill with people.

We had some sense of urgency about this because we agreed to have everyone coming into town on Thursday for our wedding to our house for a barbecue, so we really want our outdoor space to look nice and inviting!

I might put caution tape around this thing. It’s still in the corner.

We’ve been grilling up a storm so I wanted to share this recipe, which is one that my mom used to make alllll the time. It is so quick and easy and one of my all time favorites.

*You can probably use whatever cut of pork you want. I bought a center cut pork loin roast. It was big- over 3 lbs- and only about $7. I wouldn’t splurge on a tenderloin, but if pork chops or something are on sale you could just cut them up smaller to be put on skewers.

Cut the pork into chunks. I like to have them large enough that they are easily skewered- most end up being 1-2 bites.

Cut up the peppers, onions, and pineapple the same way.

Combine 1/4 cup soy sauce, 2 tablespoons of honey, and 2 tablespoons of olive oil. Pour over the pork and toss. This can marinate anywhere from 30 minutes to several hours. I’ve made this twice in the last week and the first time was just a quick marinade, the second went for a few hours. I also marinated the veggies (not the pineapple) the second time in a separate batch of marinade, and I prefer them this way. But your call!

Must have wine for this part.

Skewer everything. I like to put the pork all together and the veggies and pineapple on separate ones just for cooking time, but if you want to be fancy you can mix it up.

Grill for 12-15 minutes, rotating every few minutes until the pork is browned on all sides and cooked through. Veggies don’t have to go for quite as long, obviously, but I like the char!

Serve with rice! I messed up the first time and forgot to buy rice pilaf (a staple whenever we had this at home) so I had to settle for basmati. Last night when Kelly and Aaron came over I had the good stuff.

It was ironic to be getting all these texts on Saturday like “one week til you’re married!!” when I was covered in black stain and sweating profusely. At one point I asked the GS to take a picture of my disgusting self, and then a mosquito flew at my face and when I swatted it I got stain all over the floor. 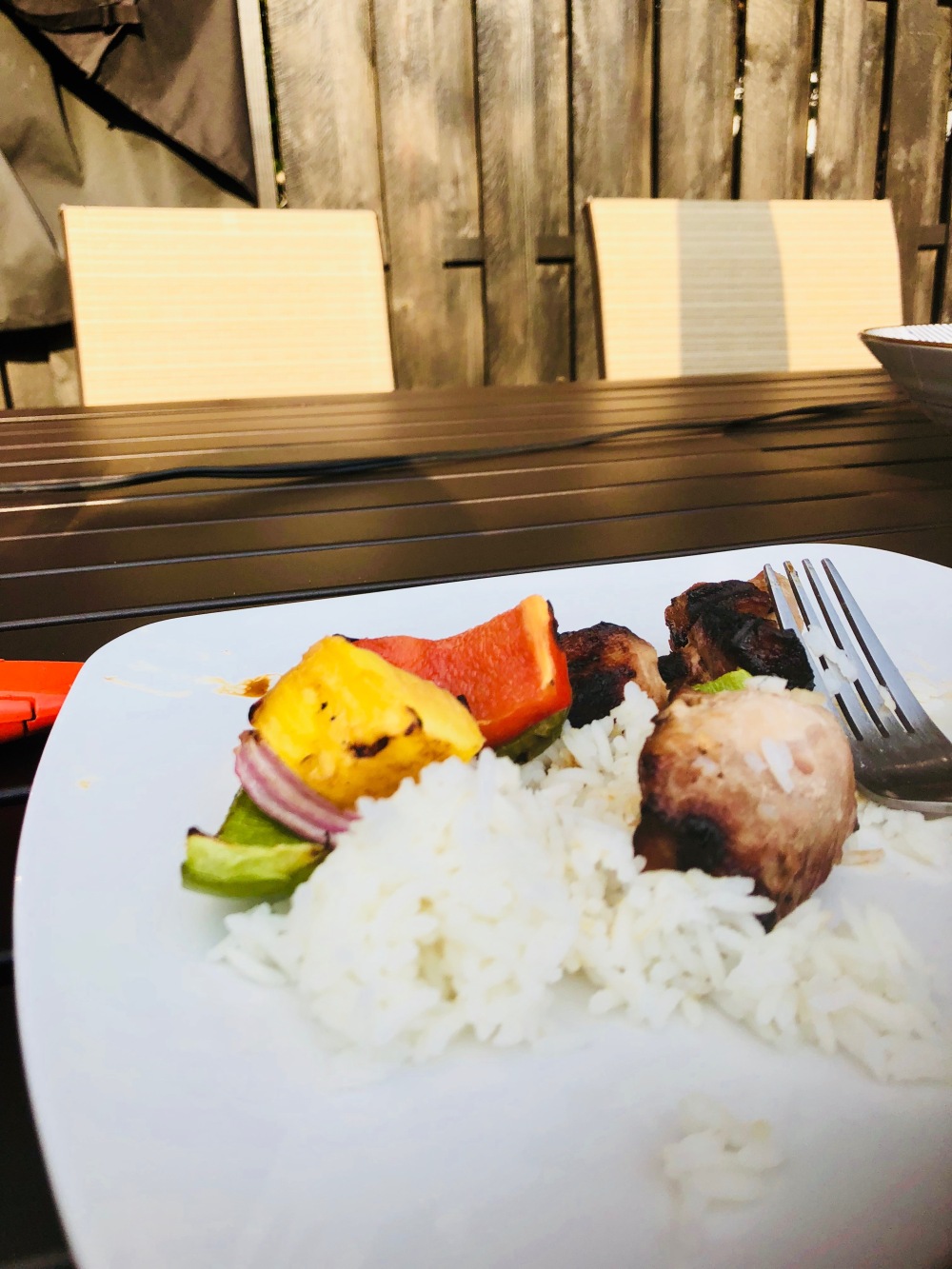