This sounds too fancy to be a quick and easy meal, right? WRONG.

On Sunday I went to yoga and then picked the GS up from the golf course to take him to Wegmans with me. His golf buddy was all like “Dude, you’re getting dragged to the grocery store? SUCKS!” in the way that cool men do.

As it turns out, the Wegmans hater was heading home to help his wife with a yard sale. LAME.

Plus the GS secretly loves Wegmans almost as much as I do. I know it.

If you’ve ever been in one, you shouldn’t be surprised that it was a complete cluster on a Sunday afternoon. I got the last cart! Madness. I had some avocados, cilantro, and jalapeno in the fridge that I wanted to use, but no other real inspiration for a meal. Aside from just making guac and calling it a night.

So we bought fish! Some wild caught cod. We chatted with another lady who was also buying cod to feed her family. It was all very lovely activity for a Sunday.

Then I went home, doused it with beer, and we watched 4 episodes of The Handmaid’s Tale which made me want to rip my eyes out but also watch it forever and always.

By the way, Hulu is the absolute worst and I don’t know how they are still in business other than the fact that it’s the only way to watch The Handmaid’s Tale.

Your two jobs are to beer batter something (doesn’t have to be fish) and watch this show and explain it to me. Weekend plans: go!

salt and pepper, to taste

Combine the beer and the flour. You may have to add a little more beer, but you want to leave as much as possible in the can for drinking, of course. I used an IPA, but if you’re using a more basic pilsner I would add some garlic powder or other seasoning to the beer batter so that it has more flavor.

Season the fish on both sides with salt, pepper, and garlic powder. Cut it into smaller pieces (think chicken tender size) for easier frying. Dip in the beer batter, and fry in vegetable or canola oil until brown and crispy on both sides (should only take about 2-3 minutes per side). Transfer to a wire rack or paper towels and season immediately with salt.

Combine the slaw mix with onion, jalapeno, and cilantro. Add the mayo and sour cream (you could use all mayo, or sub the sour cream for Greek yogurt. I didn’t have any on hand) and stir to combine. Season to taste with salt and pepper.

Top the fish with the slaw, and some avocado slices. So pretty for summer! 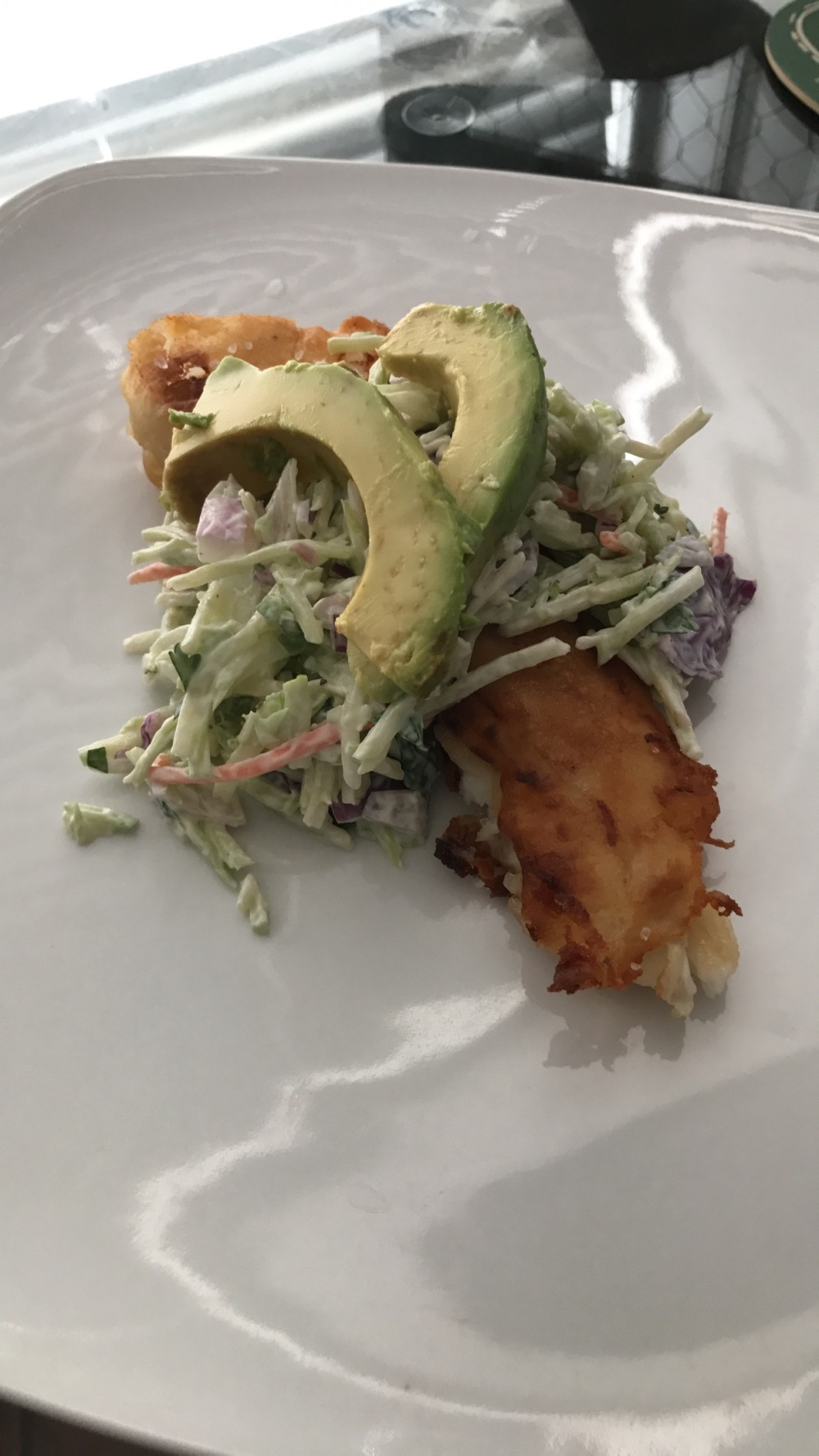 Or for locking yourself in your apartment for binge-watching television. Either one.