This is not an adequate title for all the lovely things in this wrap.

It is, however, what the Real Deal Deli in Dedham, MA called the wrap which inspired this creation.

I had this for lunch one day about a month ago when I was training in Massachusetts and I loooooved it. It’s always exciting to find vegetarian dishes that are really flavorful and filling. It makes me think I can give up meat.

And then I remember chicken wing dip and I change my mind.

Anyway, as soon as I had this I knew I wanted to try to copy it at home.

Lately I’ve been grocery shopping like a European. By that I mean, I go basically every day and buy exactly what I need for dinner that night.

Of course in Europe they’re probably shopping at farmer’s markets or adorable stands on cobblestone streets and not at Harris Teeter, but same thing.

Unfortunately because I’ve been shopping this way, I’ve run into the avocado dilemma more than once. Have you been there? You’re at the grocery store and you need an avocado and you need it to be perfectly ripe and ready rightthisminute.

There are 14,000 avocados at the store. For some reason they still cost $7 each but we’re ignoring that for the sake of a good recipe. You grope each and every avocado and try to find one with a little give to it.

All of them are hard as rock. Eventually you find one that might be almost ripe maybe it’s a little bit softer than the others?

Really your hand has just become stronger from all the squeezing and you now have superhuman strength like the magic hand Voldemort gave Wormtail in Harry Potter and the Goblet of Fire.

I’m even weirder than usual today.

Then someone walks up and starts doing the exact same thing you just did and you want to tell them not to waste their time because all the avocados suck except for the one you just picked. But you refrain.

1 can chipotle peppers in adobo sauce

The wrap I had in Massachusetts said it included “black bean hummus.” I interpreted this as mashed black beans. I drained and rinsed them, mashed them with a fork, added some garlic and cilantro for extra color and flavor.

For the poblano, I stuck it right over the flame on the gas stove until it was charred all the way around. I put it in a glass bowl and covered it with plastic wrap until it cooled, and then pulled the skin off and removed the stem and seeds.

I boiled the corn for 8 minutes, then cut it off the cob with a serrated knife.

Mix the mayo with a little of the juice from a can of chipotle peppers. Exciting revelation- the sandwich/wrap area of the dining hall in college was called “Stacks & Rappz” (I think their attempt to be cool and trendy?) and they had this “Southwest sauce” that I was obsessed with. I had a wrap with grilled chicken, lettuce, tomato, onion, Southwest sauce at least 4 times a week. Said sauce is just chipotle mayo. It’s going to be a staple in my fridge now.

I got a little too excited the first time I made it and overfilled the wrap. 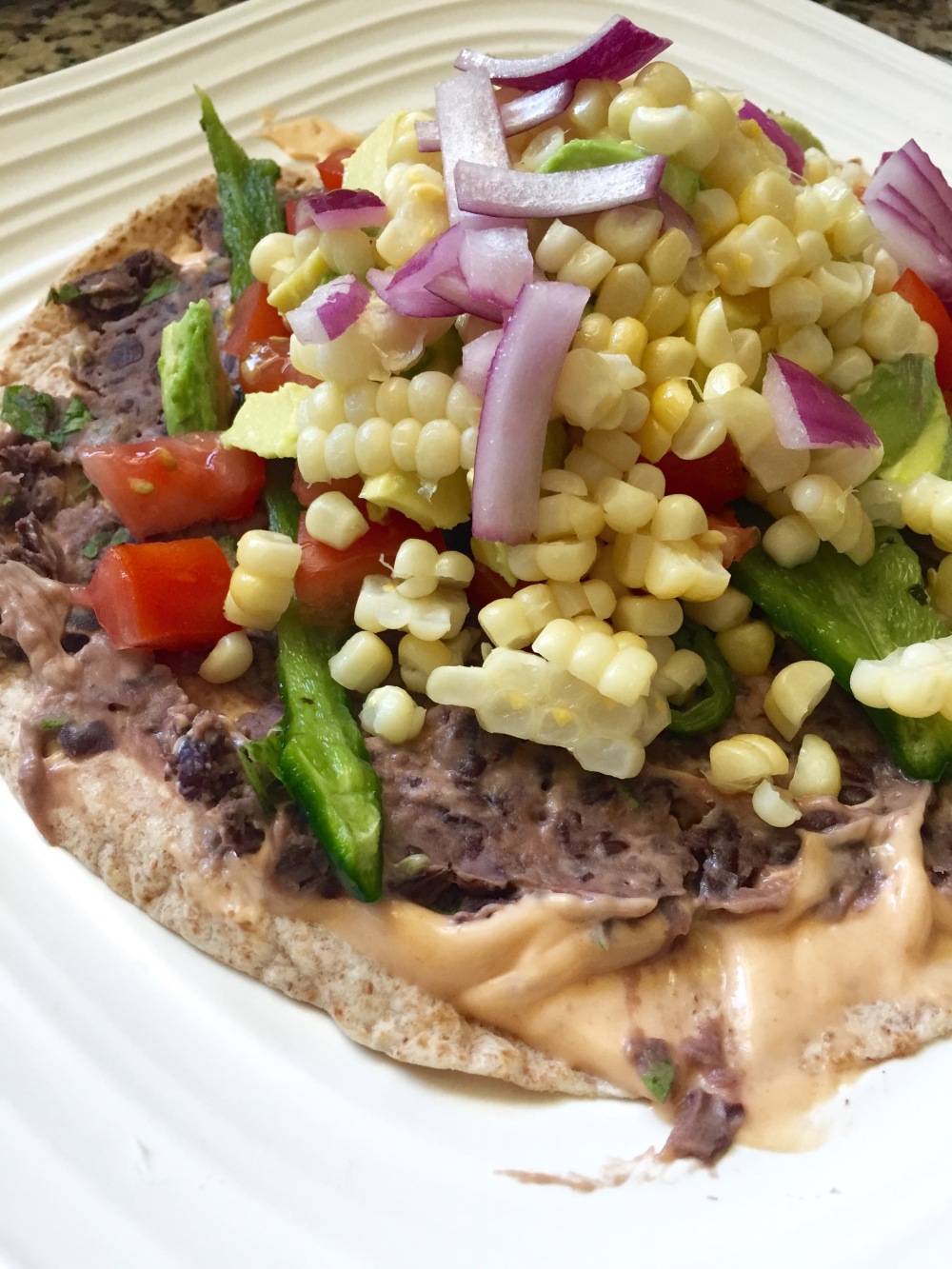 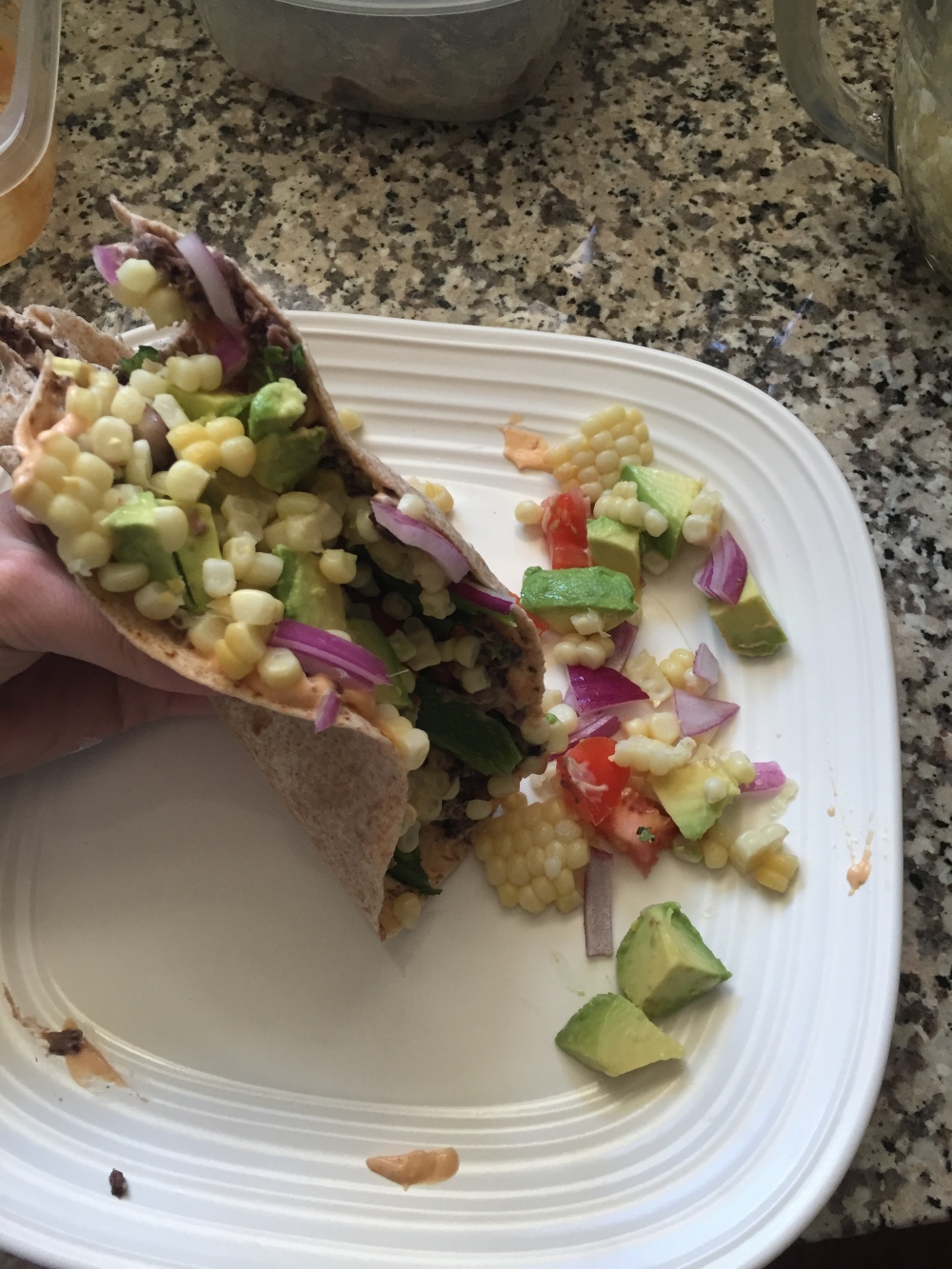 Night two was neater. Mine is totally prettier than the original, right? 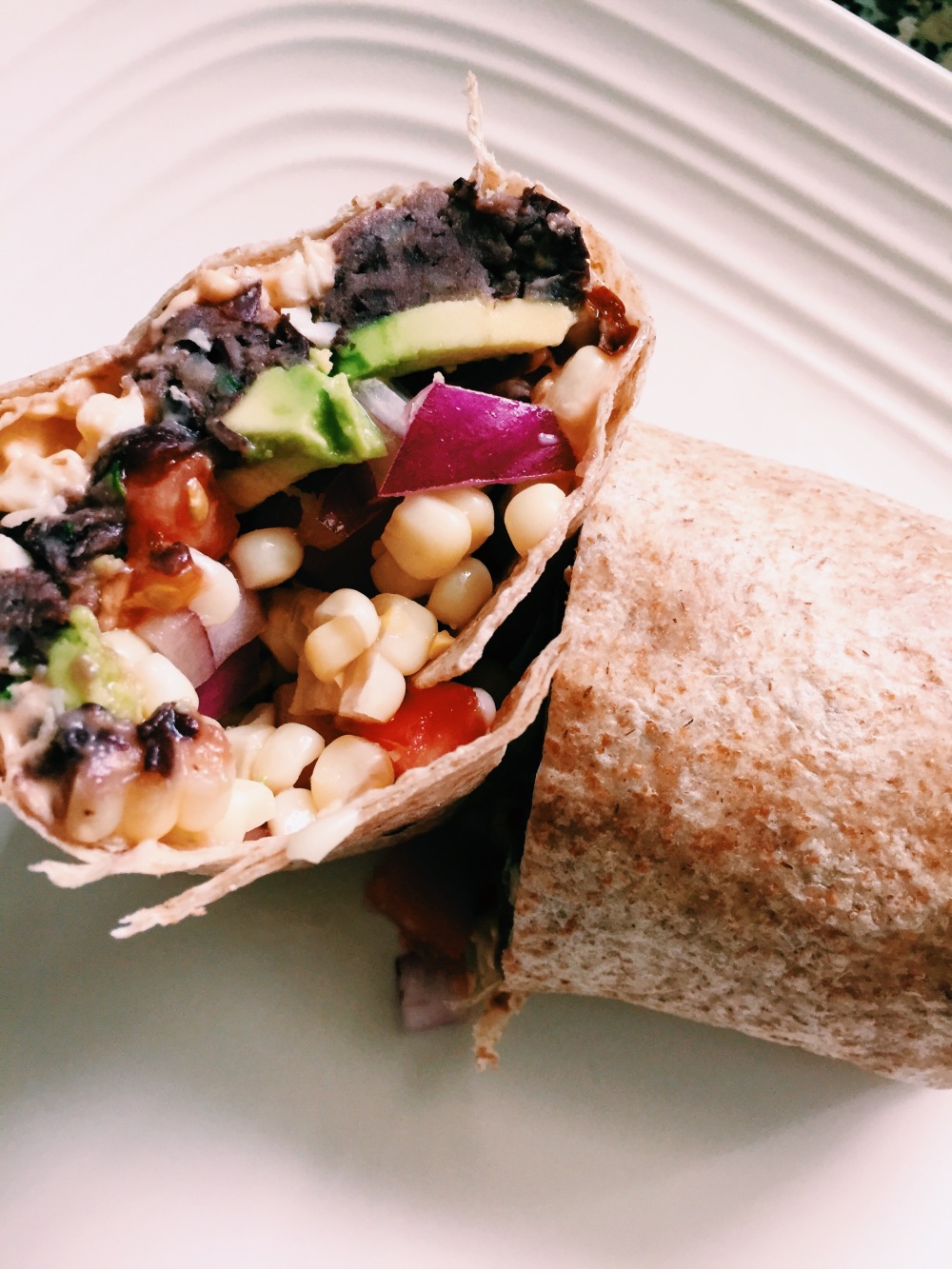 PS the GS wolfed one of these down and then asked, “Was there meat in that?”

Vegetarians for the win.