Back to the grind, post Labor Day Weekend fun.

As a birthday present to myself, I took my first paid vacation day EVER on Friday, and headed to camp after work on Thursday. I had two IPAs and Kevin gave me a baseball card with his face on it so it was a pretty solid way to ring in 25.

On said paid vacation day, I played 18 holes of golf, went water skiing, and drank wine slushies. It will be tough to top for sure.

It was nice to have more than 36 hours with the GS, which has been our usual routine since I moved to Rochester. We had a cloudy day on Sunday so we went to a couple breweries, Two Goats and Roosterfish.

Two Goats was really cool and has a gorgeous view of Seneca Lake, and Roosterfish is a hidden gem in Watkins Glen. Free tasting and they had live music! Sold.

That night for dinner I fixed this salmon- which is very similar to the salmon that Kelly, Aaron and I threw together for my birthday dinner. I’m always a little wary of grilling fish because it tends to fall apart, but keeping it in a tin foil packet is a good solution.

Place the salmon filets on a sheet of aluminum foil. Drizzle with olive oil, and a little squeeze of lemon and lime juice. Top with the sliced lemon, lime, and onion. Sprinkle with salt and pepper. 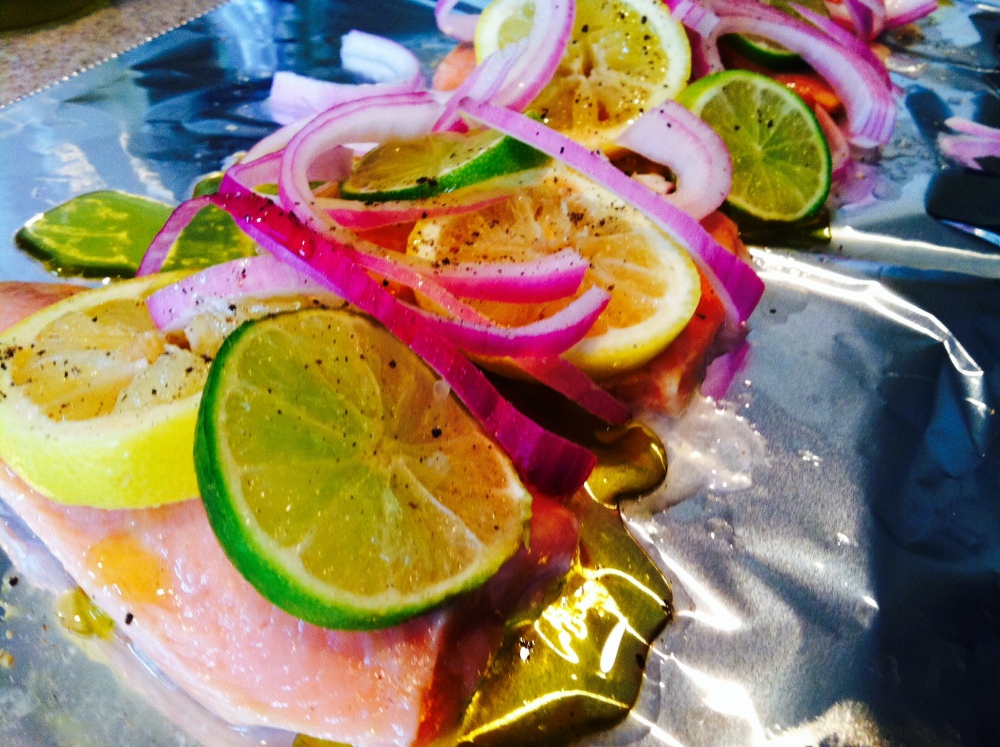 Top with cilantro and fold into a packet. You want it to be pretty secure so that the fish will steam inside the packet and not get dried out.

Place on the grill for about 15 minutes. We ate ours with this orzo dish. I actually didn’t even eat any of the salmon I made, because it got scooped up pretty fast so I opted for a black bean burger instead. This is why I don’t have an “after” photo. Meals at camp are always kind of a hodge podge of excessive grilled food plus leftovers. I love it.

Just because we can’t wear white pants anymore doesn’t mean you shouldn’t still take advantage of your grill for the next few weeks and make a summery fish dish.

I also came home with about 10 pounds of leftover vegetables and random food that would have otherwise been thrown out in the LDW camp refrigerator clean-out. The next week of recipes could get interesting.