I know I just posted chicken, but this is a whole new ballgame.

My kitchen and my heart have been wanting this for a loooong time.

I’ve been a little hesitant because I was worried that it would be a lot of work and then it wouldn’t turn out good and then because I’m a crazy perfectionist I would just stare at it and cry. And then throw it in the trash, wrapped in 6 bags so it doesn’t get attacked by flies which will eat anything.

Really my main concern was that it would be dry. And because I couldn’t figure out a way to incorporate a slice of gravy soaked bread in the middle, I went with the next best thing.

By the way, if you got that reference I will love you forever.

Next best thing? Mayonnaise. I KNOW. People are grossed out by it blah blah. It’s eggs and oil, people! These are normal everyday ingredients that happen to make an assortment of foods golden and crispy on the outside. I didn’t want to slather straight mayonnaise on it, so I added a little fancy mustard that the GS brought back from Germany, as well as some garlic because that goes with everything, and parsley.

I bought a chicken without the giblets because I figured best not to skeeve myself from the start. Rinse it off with cold water, and pat completely dry. Season liberally with salt and pepper.

Cover the bottom of your roasting pan with the sliced onion. Sit the chicken on top. Combine the mayo, mustard, garlic, and parsley. Rub it into the whole chicken, getting under the skin and into all the nooks and crannies. Stuff a few of the onions in the cavity. Let it sit, refrigerated, for at least 8 hours.

Stick it in the oven at 375 for about 45 minutes, then flip it over for another 35 or so. I don’t have a meat thermometer, so I just cut between the breast and the leg to see if the juices were clear. Cooked perfectly. 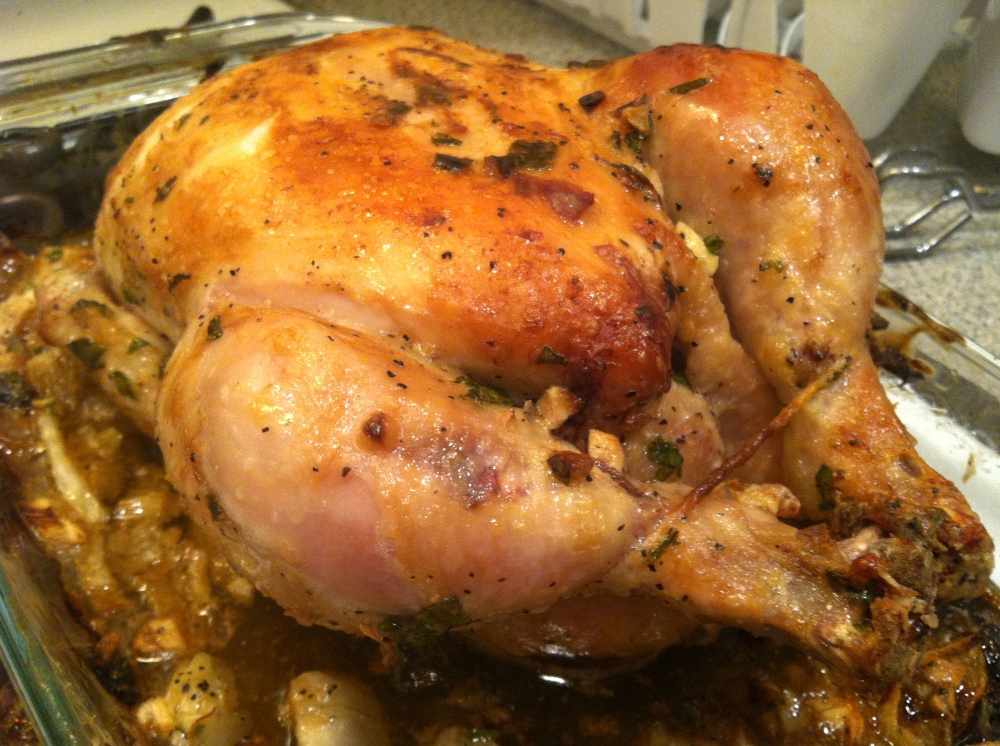 We only ate the legs and the wings, so I still have all the breast meat for leftovers. I could not be more excited. It was so juicy and flavorful and the meat fell off the bone. I may never go back to frozen chicken cutlets.

Also, I told the GS that there was mayonnaise on it after we were done eating. Granted, he isn’t grossed out by mayonnaise, but he said that if I gave him a list of 50 ingredients it could have been he never would have guessed mayo. So THERE. You have to try it.