This may be my greatest cooking adventure to date.

I’m not sure why I’ve been consumed by the idea of making falafel considering I’ve had it once, the day I moved back to Baltimore. There’s a Mediterranean restaurant down the street from us called Baba’s that has really good food and is BYOB, pretty much a win win. Kelly is obsessed with it. It will be around 9 am and she’ll casually say, “So, I’m kind of in the mood for Baba’s. And I mean, it’s so close. Should we go?” Yes Kelly, let’s consume lots of spicy food and alcohol at breakfast time.

I understand why she likes it though. And actually, after spending a solid three hours making the falafel, tahini sauce, and homemade pita bread, I think I might quit audiology and just apply for a job there.

I used Anne Burrell’s recipe, with a few adjustments. Such as not buying fresh spices, toasting them myself, and grinding them in the spice grinder I don’t own. This is the simple life.

Soak the chickpeas for 6-8 hours. Drain and rinse, then boil for 30-35 minutes until cooked through. Test 5 or 6 to make sure they’re all cooked. Transfer them to a food processor and blend until they’re coarse and grainy.

Add the rest of your ingredients and stir together. I used curly parsley because the flat leaf at Shoppers was looking questionable at best (insert whining comment about missing Wegmans). Depending on the consistency of the mixture, roll into balls and then roll in the flour and press into patties on a baking sheet. Mine was too crumbly, so I added water. In the future I would probably use egg or oil, but the water held them together enough to form. If you were using canned chickpeas your mixture would probably have more moisture so you would be okay without it. 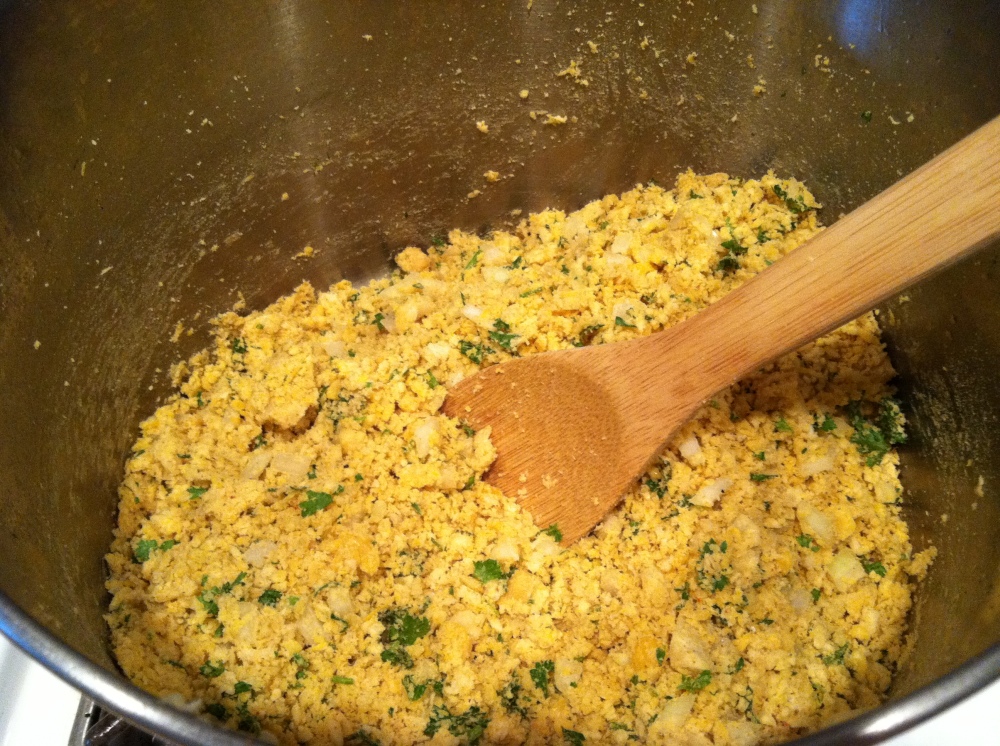 Refrigerate for an hour or so until firm. Heat up your oil and pan fry until browned on each side. I used vegetable oil, but I’d recommend getting something with a higher smoke point, because I think we learned that our smoke detectors don’t work. We’ll replace those after the oven knob. Place onto a paper towel to drain excess oil. 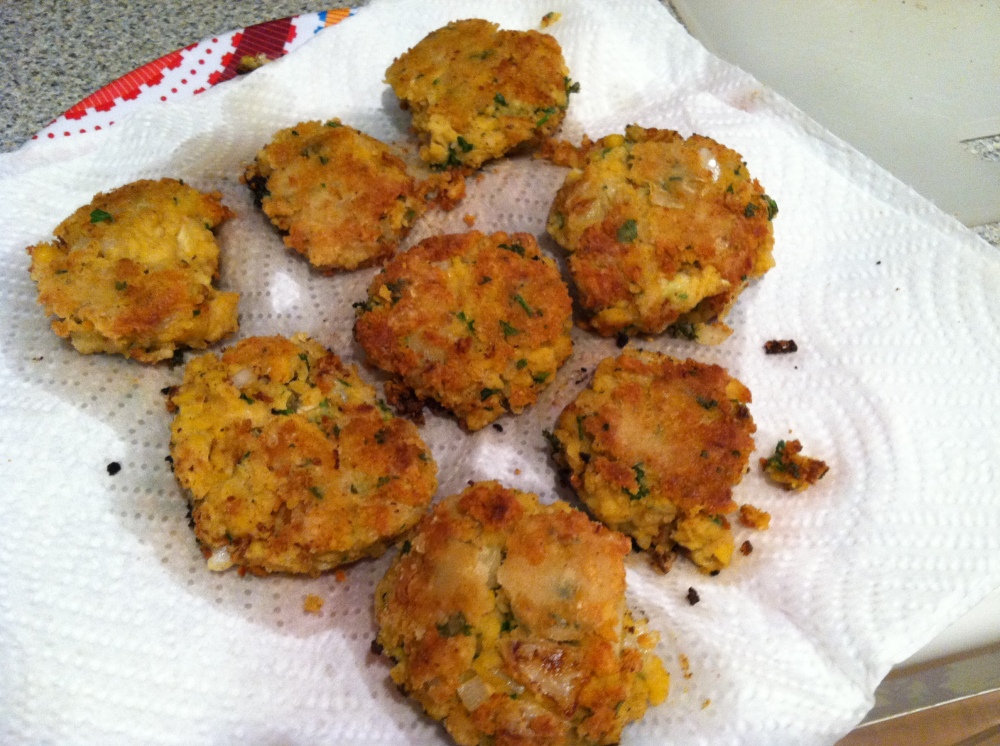 They don’t look pretty, but they were delicious. We had some of Kelly’s friends over and they all loved it, or at least they told me they did. We also discussed which one of us would be the one to murder everyone else if we were in the movie “The Dinner Party”… so maybe they didn’t want to hurt my feelings.

Moving on to pita bread. As the chickpeas were cooking, I made the dough for the pita (I used a recipe I found on The Galley Gourmet) and then let it rise while I put together the falafel mixture. This process was very similar to the wheat bread I made a couple weeks ago.

Mix the honey into 1 cup of warm water, then add your yeast. Let it sit for 5-10 minutes until it’s foamy and looks like this:

So appetizing. Mix together the flours and salt- I started with 2 cups of each kind of flour and gradually added more flour and more water. Pour in your yeast and 1/4 cup oil, plus another cup of warm water. Mix with your hands and remember to take off your ring (I definitely don’t still have remnants of bread dough in my claddaugh) or use a stand mixer if you have one. Or bring it to my house and give it to me and I’ll make you pita bread all the time.

Gradually add in more flour and another 1/2 cup of water one tablespoon at a time if you need it. Knead the dough for 5-10 minutes until it’s smooth, and then place in an oiled bowl and let it rise in a warm place, covered, for an hour.

Punch it down and let it rest another 20 minutes. Then separate into sections, I made 8. If you have a stand mixer you might also have a kitchen scale. If not, eyeball it like I did. Roll into balls and then using a rolling pin flatten into your pita shape. Keep the other sections of dough covered with plastic wrap while you’re rolling so they don’t dry out. Let them rise for another hour, covered with a damp towel.

This part was interesting because our two baking sheets were already being used by falafel in the refrigerator, so I had pitas all over different sized plates covered in damp paper towels all over my kitchen. Mom, I want a pizza stone for Christmas.

Bake at 500 degrees (or somewhere around there if you have a mystery oven) for about 5 minutes. Stack and keep them covered under a towel to stay warm.

Then form your assembly line. Pita, falafel, and whatever other toppings you want- I had baby spinach, tomatoes, and cucumbers.

I also made tahini sauce (using Emeril’s recipe but added more lemon juice and more garlic). It was delicious, and totally worth the 8 dollars I spent on the tahini. Normal grocery store purchases.

They were so good.