Yesterday was a terrible horrible no good very bad day.

Apparently when people from Maryland learn to drive it is perpetually sunny and dry, and the roads have no other cars on them. Because yesterday, in the rain, it took me an hour and a half to get to school. It usually takes 25 minutes. In the snow, they declare a state of emergency and there aren’t any cars allowed on the roads. In nice weather, people just walk in the middle of the street, as if pedestrians have the right of way everywhere, all the time. It’s all very convenient.

There were so many accidents that I had to completely change my route and got a little lost. At one point I was driving so slow that my GPS asked politely if I’d like to switch to “walking mode.”

Now I find that slightly entertaining, but yesterday it made me burst into tears in my car because I was already a half hour late for class. Which is not allowed in grad school.

I also came down with a sudden but severe cold, and had to chug Airborne prior to teaching Body Pump last night because just looking at the barbell made me want to collapse. Then I came home and ate this for dinner.

So today I’m being lazy and feeling sorry for myself (could you tell?) and decided to do a little bread making. I found this recipe on my handy dandy All Recipes iPhone app. It’s titled “Kid-Friendly Wheat Bread,” which jumped out at me because I’m fully aware that I’m being a childish brat.

I had to cut it in half, surprise surprise. Bread is one of my worst weaknesses. It might be on par with chocolate. Maybe I’ll make a quick ganache and schmear some of that on a slice later..

Cutting it in half complicated things slightly because I don’t have a 1/6 measuring cup (do those exist?) so I had to guest-imate a little bit. But let me tell you, the result was fantastic.

from Susan K. on allrecipes

Mix the teaspoon of brown sugar into the warm water, then sprinkle the yeast on top and let it sit for 10 minutes or so. In a large bowl, mix 1/2 cup of white flour and 1 1/2 cups whole wheat flour with the 1/6 cup brown sugar, salt, vegetable oil, and milk. Pour in the yeast mixture and use your hands to combine.

Add the remaining flour- I only ended up using about 1/4 cup each (as opposed to 1/2 cup each) so add it gradually until the desired consistency is reached. Knead the dough for 5 minutes or so until everything is combined.

Place in a lightly oiled bowl and cover with a towel. Allow the dough to rise in a warm place (I used my oven) for an hour.

Punch the dough down and shape into a loaf. Place into a greased 9×5 bread tin and cover, allow it to rise for another 40 minutes or so.

I ate it straight out of the oven, of course, and the butter melted right into it and made it even more moist and delicious. 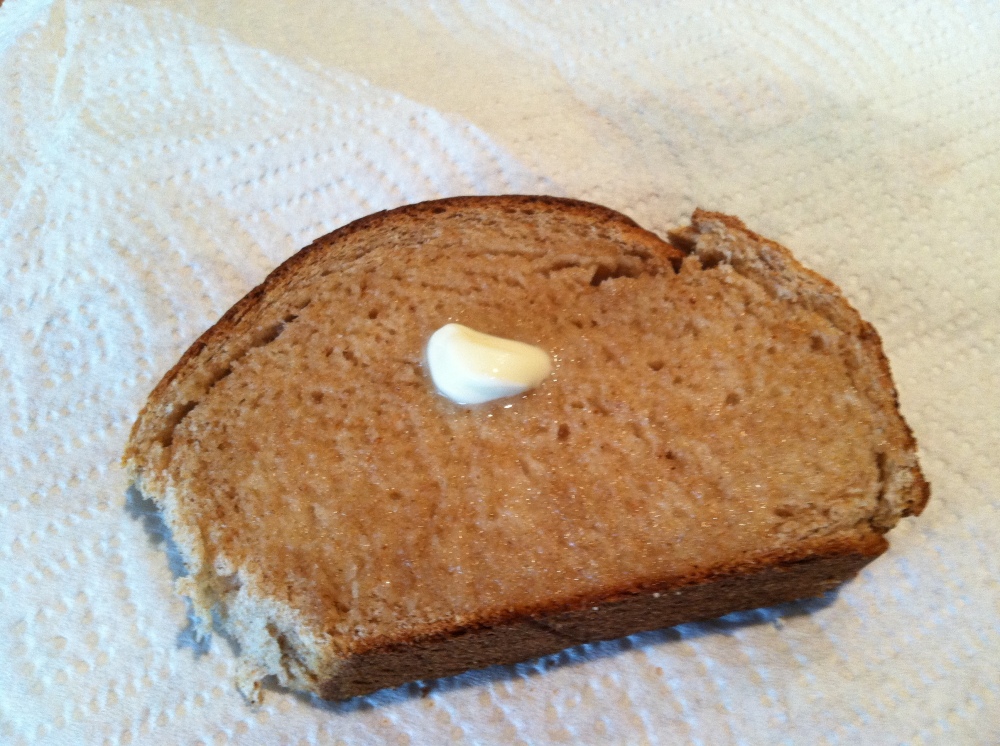 Then I tried some with jelly.

And some with peanut butter. Just to make sure it tasted right. I feel obligated to provide this information to our readership.

It will also serve as a chaser for my next dose of Airborne.