Now that we have the basics down of what a camp is, I’ll give you a little background on mine. My great grandparents bought the land on Cayuga lake and put up a house millions of years ago, and we ventured out to that little place (fondly known as “the white camp”) until I was about 10. At this point we had far outgrown it because my mom is one of 8- so three bedrooms weren’t quite cutting it for 8 children, their spouses, 23 grandchildren, and my grandparents. The place was also really old and outdated- carpeted kitchen is even grosser than it sounds. The house was also up on a hill and was slowly slanting into the lake, which was unfortunate if you were on the lake-side of the dinner table and someone spilled their milk. For these reasons and many others, my grandma decided to build a place that could accommodate everyone and all of our needs.

Don’t get the impression this new place is fancy or lakehouse-esq. We still have most of the furniture from the old place, including a red plastic (you’re thinking pleather, but I really do mean plastic) couch. “Perfect for sitting on with wet bathing suits!!” We also have a variety of tupperware that lacks the correct lid, 3 knife blocks- none of which contain a knife sharp enough to cut anything other than butter, and a drawer of kitchen tools that includes 2 garlic presses and 5 wine openers but no ladel. It is my favorite place in the world.

The reason I classified dessert as its own meal in the last post is because we put out a variety of baked goods after dinner as a precursor to the s’mores at the bonfire once it gets dark. I lived there for the whole summer two years ago and was mystified as to why I put on 15 pounds. This chocolate cake is the absolute easiest dessert to make- it kind of resembles a Sandra Lee recipe which I would never resort to BUT it is actually attributed to my Aunt Pat, who is fabulous. This is all you need- two boxes of cake mix, and two boxes of cook and serve pudding. 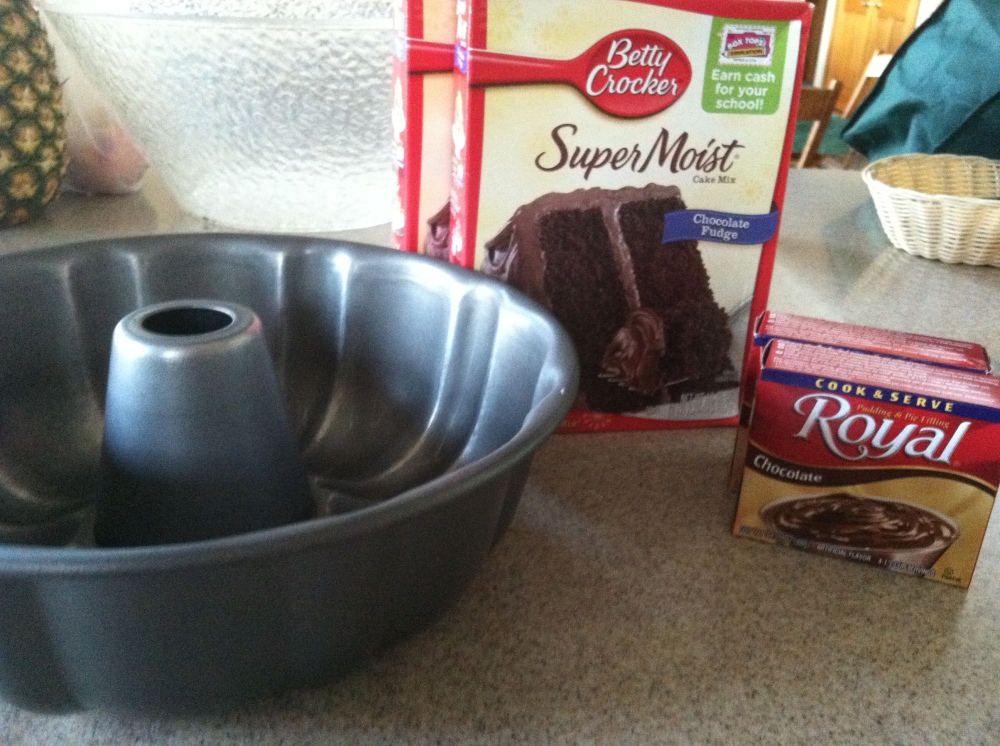 You make the pudding in the microwave and then add the cake mix- just the dry ingredients don’t add the eggs or oil or anything. AND THAT’S IT. It’s unbelievably simple.

Okay I lied- there is another ingredient. Chocolate chips. I put them on top. I have no self control.

This cake reminds me of the one in the movie Matilda that Bruce supposedly stole from the Trunchbull. When I eat it slice by slice I imagine a whole school full of children chanting my name to finish. And then when I’ve finished I wish someone had put me in the chokey after the first slice. If you haven’t seen this movie/read this book- do it now.

Bake it at 350 for 45 minutes in a greased bundt pan. If you’re fancy put it on a big cake stand and show it off. If you’re like me put it on a regular plate and grab chunks from it with your hands when no one is looking.